Yesterday, Frankie stepped up to the plate to do a pizza review for the ages. His guests were the cast of Jersey Shore: Family Vacation. Obviously, Pauly D, Vinny, Situation, Deena, and JWOWW are all-star entertainers, and nearly anyone else on the planet would be forgotten beside the glitz and glamour of that ensemble. But against all odds, it was my Frankie who stole the show. 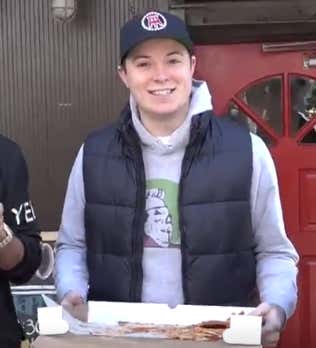 In what could only be termed the most sexual photograph ever taken, Frankie’s rock-hard confidence and 1,000-watt smile would lead us to believe his next question is: “Did someone order a large sausage pizza?” The only reason to doubt his suitability for that role is that there is simply no way the box could ever close on his tent pole, thus ruining the element of surprise. The Big Sausage Pizza series was best when the women would feign their disgust upon revealing that the delivery boy had cut a hole through the bottom of the box and the middle of the pizza before threading his unit through a porthole of serrated cardboard and hot dairy. “Oh my GOD, WHAT?” they shrieked, with mock indignation that quickly morphed into curiosity. It’s a scene that Frankie and I have reenacted countless times. He may be the pizzamaker, but I always play the delivery boy.

On to his performance. Right off the bat, we see Frankie holding the door for JWOWW (shout out to a woman who has more W’s in her name than Dave’s horses have combined). Ever the gentleman, Frankie says, “we’ve still got a couple more people, hold on, here we go.” I later learned that Frankie was waiting for JWOWW to settle her infant son inside so that she could do the pizza review unhindered by motherly duties. Clearly, Frankie is going to make a great mother some day.

As the banter begins, Vinny tells Frankie “you still look like you’re in high school.” I dug my fingernails into my palms so hard that I drew blood. Nobody talks to my little shepherd’s pie like that. Just because his four cheeks are smoother than a bowling lane doesn’t give Vinnie the right to mock him. Some people develop at different stages in life. Have I been stirring anti-aging serums into Frankie’s sodas to keep him looking nubile and cherubic for as long as we share a lease? I’m not prepared to deny it. But Frankie’s lack of facial hair, muscle definition, or any trace of masculinity whatsoever is not his fault. Do you think he likes checking “other” under the gender category on medical forms? Do you think he enjoys using handicap bathrooms because they’re non-binary? Of course not. But the reason we work so well together is because I don’t dog him for it, and because I’m more than enough man for both of us. Had I been there, I would have beaten Vinny’s face until it resembled the ground veal patties I’m sure someone in his family sells.

A few seconds later, Situation starts rambling about going off his diet. And then, the strangest moment of the entire scene. At 1:07, Situation says “not today, Satan.” I had never heard this saying before, and nor had Frankie. But according to Liz, this is a popular euphemism in black culture. At the roast of Donald Trump–where Situation bombed so hard that Frankie and I woke up from our nap mid-spoon to watch–many comics derided Situation for thinking he’s black. And folks, there is nothing that gets Frankie’s blood boiling more than when a white guy tries to act black. 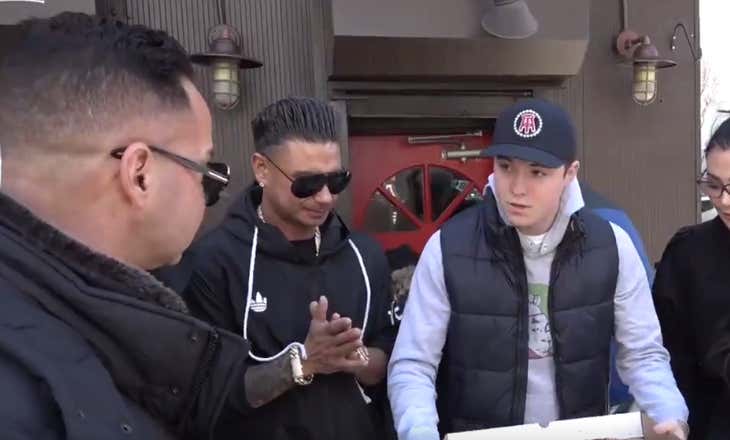 At 2:30, Frankie starts to get into the groove. He looks around and says, “is everyone going by the rules? Everyone having one bite?” It’s a subtle joke that almost, almost goes unnoticed. I might not have caught it myself if not for this look: 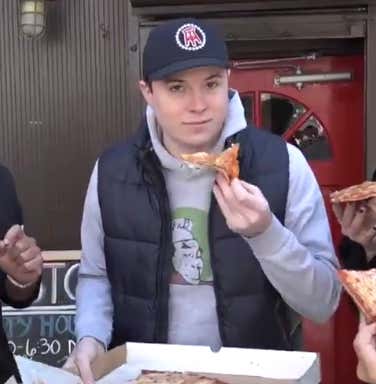 This look says: When you tell a great joke and nobody acknowledges it but you know you’re still perfect. This is a look Frankie and I share all the time. We call it “our look.” It’s very close to the look he gives me when I suggest we try a new restaurant because I feel like we’re in a rut. I know his looks by heart now.

At 4:10, Frankie finally gives his own review. “6.8,” he says, reminding us that he’s not a size queen. He fields the scores from his guests with aplomb and keeps the segment moving forward. It’s not an easy task to keep so many balls in the air, but I once saw Frankie fit 16 grapes in his mouth without losing the rhythm of his stroke. Even though it sometimes makes me jealous, Frankie is exceptionally good at satisfying a large circle of people.

In the end, it’s a terrific review. This was not an easy task: Frankie made his rookie debut with the cast of our generation’s most culturally-iconic show, and he rose to the occasion just like my pizza box top rises whenever he answers our doorbell in ugg boots. And for that, I may just let him wear the box tonight.