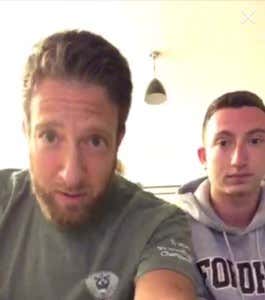 So I spent my first night at Dave’s apartment. For those who don’t know, Dave has asked/requested/demanded that I move into his apartment as long as my gambling hot streak with him goes. It started during our March Madness Facebook lives and continued in Vegas this past weekend. Entering last night, we were up 16 units together. Dave may be the worst gambler in the world without me by his side, but the second I sit next to him, his luck changes for some reason.

When I was in the Bahamas on Monday I saw rumblings on Twitter and heard rumblings on the radio that Dave was having me move in with him. I didn’t know how serious he was. So yesterday I came to the office with just the clothes I had on, kind of thinking he may have been kidding……… I was wrong.

Now despite what it may have seemed like on the Rundown/Radio, it’s not like I’m against the idea. I’m appreciative of the offer and the run I’m on and realize I’ve been given some great opportunities because of it. Getting to live rent free in a luxurious NYC apartment is quite an offer. My only hesitation was that, I only have 6 weeks of college left before I graduate and probably won’t see a lot of the people I’ve spent 4 years with as often, so I don’t think it’s unreasonable for me to have been a little hesitant at first towards the idea of moving into my bosses’ apartment 24/7 for the foreseeable future.

But we talked it through and I realized I would still have some free will. Dave is even offering me to invite friends over to his apartment and says he’ll take us clubbing in Manhattan. I told Dave he can come with me to Fordham and go out at dive bars like Mugzs. He was less than ecstatic about that idea, but he did say he may start coming to classes with me, so we can’t rule anything out.

Dave called me an Uber from the office, so I hopped in and rode over to his apartment. I tried my best to be pleasant and not hurt Dave’s Uber rating. It was a quick ride over. I rang the bell to his apartment and he let me up.

Now here was my first/only problem with the place. He doesn’t really have a door. You get in the elevator and it takes you up to the floor, then you get out and are immediately in Dave’s apartment. Talk about a security issue! All it takes is for someone to break in downstairs and somehow get onto the elevator, and BOOM, Dave is dead. I’m worried sick for him, and me for as long as I keep staying there.

Anyway, I walked in and Dave was sitting on the couch. We looked at each other and both kind of laughed, realizing this absurd storyline was now very much a real thing. I sat down on the couch (a different one from what he was on) and we started watching the games. There were only two games he bet on while I was there, Cavs at Hornets and Knicks at 76ers. For the first half, he had Cavs +1 and over 116, as well as 76ers at -8 and over 114.

Things weren’t off to a great start, but the gambling gods must have realized me and Dave were sitting next to each other, because the wins started to roll in. The Cavs were down early to Charlotte but they stormed back and led by plenty. The over was in question, but a late scoring flurry secured that.

As for the other game, Markelle Fultz took out his own teammate, Joel Embiid, so that really hurt Philly in the first half. The over hit with relative ease, but the 76ers bet was in trouble. A magical 7-0 scoring run from Philly put them up 6 and they got the ball back with one last chance for a bucket to push/win, but they came up short. So we finished 3-1 for the halves. Dave was excited. Big Cat texted him and said “this kid is unbelievable.” (Big Cat is riding Dave’s bets as long as I’m by his side, he wants some of that juju). In retrospect, if the 76ers somehow covered and we were 4-0, Dave probably would have handcuffed me to the coffee table and I never would’ve been able to leave.

It was time for Survivor. Me and Dave are both big fans. He hasn’t been watching this season though, so some “fan” he is. I haven’t missed an episode in my entire life. He recorded it so we got a late start.

10 minutes in and what do we have? Another tribe swap! Enough is enough already, Probst! 3 tribe swaps in like 5 episodes. Dave and I both agreed that this is #NotMySurvivor.

The food arrived. Because of the whole elevator system, the delivery boy basically goes in Dave’s apartment! I went to the bathroom just in case he had a gun. Also, I wanted to wash my hands before I ate. I have maybe the worst immune system in the world and don’t want it to get any worse. Well, I was out of luck.

As a big time germaphobe, I told Dave that we need some hand soap if this is gonna last.

Dinner was pretty good, don’t really know what it was though. I just told Dave I’d have whatever he was ordering to be easy.

It was like chicken teriyaki, rice, cucumbers, and some other stuff. Wouldn’t have hated Dave telling me that there egg yolk in it though. Kind of an unusual thing, but it was fine. I would’ve liked a nice soda pop to wash it down though. I was stuck with water. I saw Dave’s fridge was soda-less, so went over to him and simply said, “Hey, I like Coca-Cola.” I expect a stocked fridge when I’m back next.

The other weird thing about his apartment was the garbage. He doesn’t have a garbage can. It’s like an electronic garbage shoot. You press the button and wait for the garbage to come to your floor, then throw it in. A bit of an inconvenience. Nice not having to take the garbage out, but I’ve never in my life had to wait to use a garbage before.

After dinner, the games were getting close so it was time to shut off Survivor. Still have 17 minutes left though. Need to finish that tonight.

The Cavs covered relatively easily. It was weird watching Dave root for LeBron, but money is money. We just missed the over though. There were some miraculous 3s late to give us a shot, but ultimately we came up 3 points short. Splitsville.

Over to Knicks-Philly, the 76ers went on a nice late run to secure their cover, but again we missed the over. 118-101 was the final tally. Splitsville again.

Overall, we finished 5-3 for the night. His first half bets are 0.5 units as opposed to 1 unit for the full games, so the net profit was +1 unit, minus the vig probably put him at like +0.9 or so. Still, a profitable night is a profitable night. It wasn’t as magical a run as we had in Vegas, but we (he) still made money.

This morning in the office he was trying to say he basically broke even for the night because of the late games he bet and the vigs. Hey buddy, that’s not how this works. Bets he loses while I’m not by his side can’t be blamed one me. We finished up 1 unit in our bets. Better than the 0-5 he was while I was gone on Monday and Tuesday.

And that was that. Dave called me my Uber and I headed back to Long Island. I’m on break so the trip home is a bit longer than to Fordham, but it was manageable. But when I was in the Uber, I realized I forgot my phone charging cord at his apartment. I texted him to ask him to bring it in the office today, but he forgot. Talk about a headache. Nothing worse than not having a phone charger, and now I don’t have an extra. And despite the nasty rumors on the Internet, this was not a “leave behind.”

Overall, it was a nice night. We made some money, watched some Survivor, and ate some food. I was home at a reasonable hour. And while it is an absurd/bizarre situation, I don’t really think it ever felt awkward while I was there. We talked a bit, and sat in silence when appropriate.

I may be living the weirdest life of any 21-year-old in the world right now, but I can’t complain. Just gotta enjoy the ride.

We’re on to Opening Day.