Yesterday, we found out that Dave’s gambling addiction runs so deep that he has invited a college student to live with him. Over the past 2 weeks, Tommy Smokes has become Dave’s pet parakeet, perched on his shoulder and squawking bet suggestions that have hit at a remarkable rate. Dave, in turn, has been wetting his parakeet’s beak, providing saltine crackers in exchange for further gambling intel. This “friendship” has taken on a life of its own and was already teetering on the bizarre before this photo was taken: 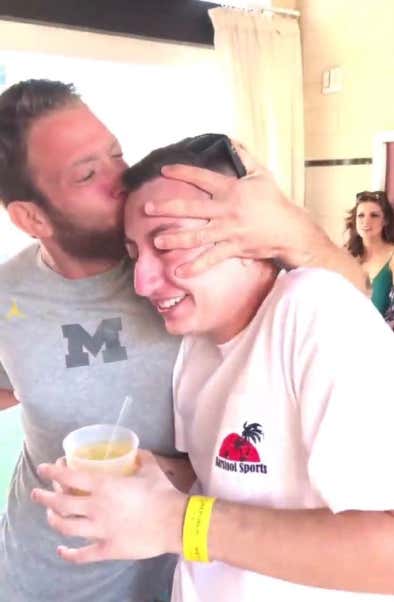 In the year and a half that I have been working at Barstool, the extent of my physical contact with Dave has been 2 separate, cold handshakes: first, when I won Barstool Idol and then again when we saw each other miraculously at the same night club in Miami. Despite my Sisyphean efforts to become best friends with Dave, he maintains his stance as my coal-mining father who feels that overt shows of affection might turn his Wyoming son gay. Think Billy Elliot’s dad if he never came around to embrace Billy’s dancing.

As such, when I saw that picture of Dave kissing Tommy Smokes’ head, I spit out my kombucha and I wasn’t even sure if mom or dad had paid for it. Putting my intense curiosity about the lady in green aside, I struggled to come to terms with Dave’s newfound love interest. So Tommy is great at calling basketball games. So Tommy apparently has some innate sense about how to double Dave’s money. So Tommy’s haircut was performed by a meth head beneath a bridge in exchange for a blow job. Does that warrant Dave’s next move– to INVITE HIM TO LIVE WITH HIM?!

Around this time, I noticed that I was not the only one who was staring enviously from the outside of a circle I had once occupied. Joining me in my jealousy was Frankie Borelli, Dave’s former boy-toy and cameraman. Now, it’s important to note that I have been developing feelings for Frankie ever since the day he showed up to work without his hat on: 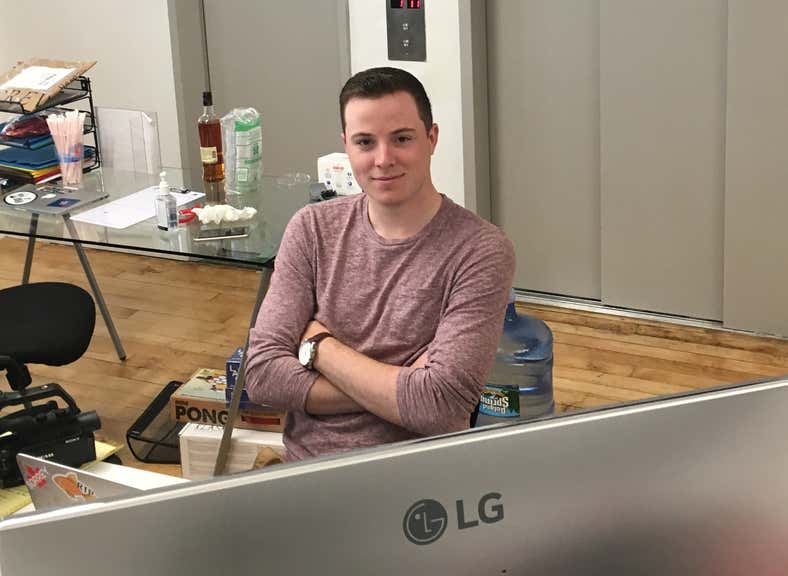 That day, for the first time, I saw Frankie in all his glory. I could tell that not a single follicle of hair had ever grown on his perfectly smooth ass, which is probably tighter than a Chinese finger trap. It is said that Frankie once spent a day at the beach and a few grains of sand made their way up his swimsuit; 2 months later, he shit out the prettiest string of pearls this side of China. I mean look at that face: he looks like the poster child for a prison-themed lesbian bar called “Dykers Island.” I knew I had to have him, but I also had to be patient– Frankie’s attachment to Dave ran deep and wide, like the curves of his hips. So I settled in for the long game.

Every day, when Frankie and Dave leave the office for their pizza review, I drop a couple scoops of estrogen and female hormone powder into Frankie’s water bottle. Slowly yet surely, his breasts have begun to take shape. I can see him wincing under the discomfort of his newly-sensitive nipples, and I will casually place a couple Advil on his desk to let him know I understand. These small gestures of kindness are exactly the sort of habits he can come to rely on once we’re living under the same roof, sharing the same coffee mugs, and cozying up under a blanket as we binge-watch Orange is the New Black, holding hands until our palms are sweaty enough for foreplay.

For months, I’ve been waiting for the right moment to give him a key to “our” apartment. It’s a big step, especially given that it would force Frankie to tell his parents that he was moving out of their house to live with me, and that the only rent he would have to pay would be in the form of access to his margarine-slathered buttocks twice a night and once each morning. “I can’t believe it’s not butter!” will be our Wifi password.

So just when I thought my heart might explode from Tommy Smokes taking up residence with Dave, I realized that two could play that game. One man’s trash is another man’s treasure. If Dave wants to cast Frankie aside in favor of a newer, shinier toy, I will happily scoop up the shattered remains of Frankie’s broken heart. It may take months to piece him back together, but as I spoon-feed soup and yogurt to my new roommate, I’ll whisper “you’ll never have to hear ‘one bite, everyone knows the rules again.'” For ours will be a home that frowns upon the use of teeth.