Sister Jean is no Saint.

There I said it. If your too sensitive to hear real truths maybe you’d be more comfortable laying in a isolation therapy chamber filled with baby oil watching lambchop reruns, but this is big boy internet and we’re here to have a real dicussion.

The big story of the weekend was Sister Jean up at Loyola Chicago as she led her Ramblers to the Final Four verse Michigan in a matchup of Catholics vs. Probably Also Catholics. While she may seem like a sweet lady, the complicated part about Sister Jean is in her contrasts. Its great that shes incapable of committing a traveling violation but she also dosent stand for the anthem. You have to take the good with the bad, and in todays society thats so quick to hand out particpation trophys for not losing, Sister Jean has gotten a free pass. But just like the earth- once you start digging a little bit into her dirt you start to get a better sense for what shes truly all about- and what title she deserves to have on her mantle.

Sister Jean troubling fact number 1: She wears her hat like a thug. In her line of work, wearing your hat backwards is literaly a Bad Habit. She should know better. This is why the yalmulke is the King Arthur great equilizer of headgear its impossble to put it on backwards.

Sister Jean troubling fact number 2: She occasonally cable-knits like a show-off instead of crotching in modest circles. Theres another old lady who use to knit alot on the sidelines her name was Madame Defarge and she sat by while numerous small-busness owners were murdered in 18th century France.

Sister Jean troubling fact number 3: Shes a typical Booster who instead of providing players with cars and clothes gives them the biggest impermissble benefit of all- eternal life in heaven. She prays on these young men but we dont call her a predator just because shes old? Hypocrisy is stunning.

Sister Jean troubling fact number 4: By choosing to marry Jesus she is literaly putting every man on earth in the friend-zone. Messed up. She dosent even know me I bet you if she gave me a shot she might be into me guess shes too stuck up oh welll her loss I dont even want to date her anyways please just give me a shot.

Sister Jean troubling fact number 5: She beleves 4/5ths of the worlds population is going to spend eternty with there skin on fire being sodomized by demons and protestants.

Sister Jean said she’s giving up losing for Lent, but the champonship game is on the day after Easter, so in other words she just guarenteed Loyola wont win the national title. The Hangover Sister Jean is going to have the day after drinking all that sacramental wine is going to give Loyola a bigger headache then they’ve ever given there opponets. And here’s my confesson- in the final four Loyola is going to be Nun and done.

Fo any complaints or questons please email my editor Darren Rovel at SportsBizReporter@Gmail.com 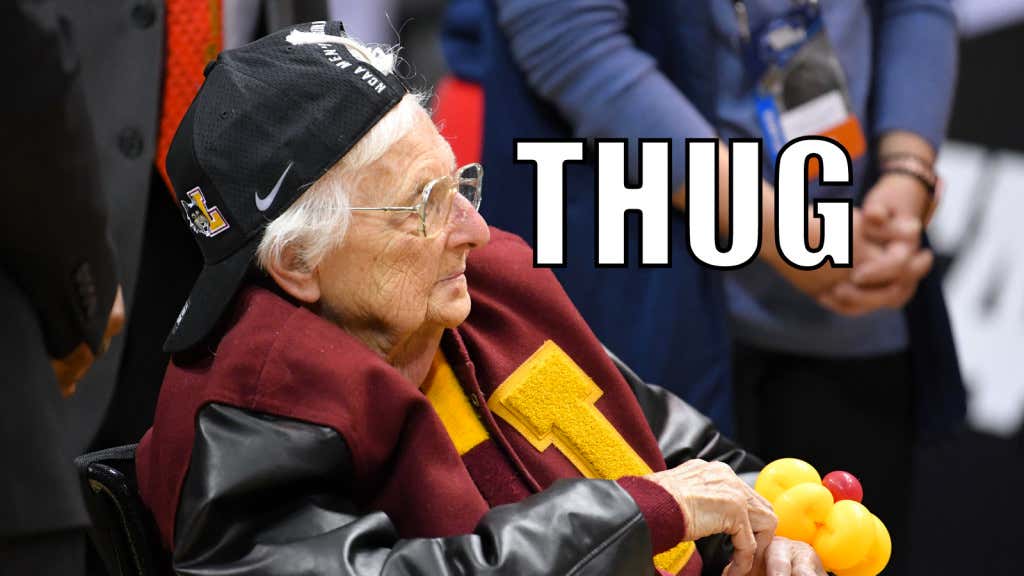 On to the awards

Josh Allen threw the ball over 3 miles on aggregate during his proday becoming the first QB in the history of the NFL to have his arm complete a 5k. Folks maybe he should run for Senator because hes the only guy that can overthrow Russia (tm Rick Reilly 1996, 1998, 2006, 2007, 2007, 2007, 2008, 2009, 2009, 2012, 2013, 2016). Some people were upset he threw inside a dome at his pro day but when you think about it a dome most closeley simulates Earths atmosphere which protects us from meteors and errant RG3 passes. A dome also constrains Allen to work within the space hes provided- if he was outdoors he would of been throwing the ball higher then sputnik. The fact he was throwing in a dome under those contraints should make scouts even more exited its like if you gave rembrandt just two colors to paint with just imagine what he can do with a full pallete.

1. Kudos to the New Orleans Saints for firing one of there cheerleaders for posting a swimsuit picture onto her private locked instagram account. Its absoluteley disgusting that she would sexualize herself like that and post a picture of her body on IG instead of having it sold in a calendar by the team she works for.

2. John Dorsey of the Browns is a football guy who is embracing analytics, most notably in his use of algebra to calculate how many Xs he can have in his XL sweatshirt before he trips over it. 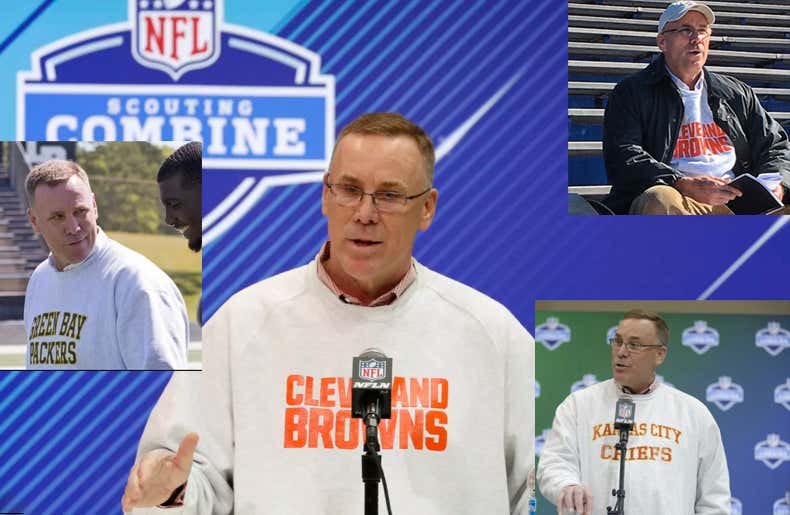 I submit that the Brown’s should actualy draft Sister Jean because whatever God theyve been preying to for the last 30 years has been the wrong one and if they can figure out a way to even finish next year w a tie they’ll have a sister to kiss right there.

3. Thank you, Bob McNair for having the courage to stand up for Jerry Richardson and help defend the safe space for guys of jeans friday:

“I’m sure he didn’t mean to offend anybody.”

. It was actualy quite feminist of him to allow his female employees to walk around the office looking so much more attractive then his male ones. In fact it should be called sexual hisrassment given how its actually sexual harassment to persecute guys for sexual harassment when they didnt mean to make anyone uncomfortable.

If he didnt mean to offend anyone it was likeley a joke and let me remind you the difference between s “manslaughter” from “mans laughter” is a safe space for men.

4. Albert Belle got arressted for “extreme DUI” which is either when you pound 20 Vodka and Surges, or where Tyler Pennington kicks you out of your house and turns it into a rehab facilty for you. And folks he looks great:

For all you youngsters out there who might not realize what a football guy Albert Belle was even though he was trapped in a Baseball Mans body here he is getting his by a pitch after hitting 2 home runs and pretending it didnt hit him so he could try and go back up to bat and hit another one:

And whats crazy is he did it again a nother time after getting hit in the head. Oh and one time he chased down some trick or treaters in his car on Halloween because they egged his house and kicked there asses. Type guy you want in your foxhole with you when the going get’s tough.

5. Michael Bennet has been charged with felony assault after being acussed of pushing and injuring a old lady in a wheelchair after Superbowl 52. First of all let me just say good job by the NFL having a 65 year old lady in a wheelchair working securty, with personell like that its a wonder Im ever able to sneak into there media days or radio rows repeatedly and without consequence.

Also just insanely bad timing by Bennet to get caught pushing a old lady in a wheelchair just as sister jean fever is sweeping the nation. Any other week and I allmost feel like its fair play to throw a old parapalegic aside like shes Gabe Carimi. Gotta be smarter.

Look for Big Cats full break down of the coaches picture coming soon but I just gota say look at Matt Patricia out here looking like a god damn snack wearing the guayabara shirt made out of a tarp that screams “I’m prepared for both pina coladas and getting caught in the rain.” And the outfit is rounded out by loaner slacks the golf course gives you if you accidently show up in shorts. Love how they had to keep the two guys with the flasks him and Andy Reid at oppsite ends of the photo like when your shop teacher wouldnt let you and your friend sit near each other because someone was going to lose a finger from all the horseplay.

7. The NFL is taking there Winters Owners Meetings to try and figure out what a catch is, and there doing it by reverse engineering from the Dez Bryant play and working backwards to see what the rule could of been to make it a catch. This is what I do every Sunday mornig when I wake up hungover with a bruise on my body somewhere and I try to tell my brain the coolest way that I could of gotten it. Here are my rule proposal for what is a catch:

-A act common to the game of football- like standing for the national anthem or not fratrenizing with a cheerleader- is completed.

8. Bill Belchick got his hands on a second set of twins now that both the McCourtey brothers are in town. The monkey business that Bills gona pull with those 4 is going to be a sight to see. Having them change jersey numbers at halftime, using there telepathy to silently communcate coverage changes, probably making them dress exactly the same during press confrences so the media has no idea which ones which. Just next level stuff

9. Look at these two heavyweight mental alphas going at each other in a battle of the minds:

As Sun Tzu put it: All Warfare is based on deception. Make no mistake this is Andy laying the groundwork for the next decade of AFC West showdowns. Only better example in the I can give in the NFL is when Michael Irvin was selling cocane in the team facilty and engaged in a ruthless battle of rock paper scissors with Everett McIver.

The old shoulderooski doesnt work on a man whose laser focused on the task at hand and Gruden exerts tremendous discipline not biting on the play fake, hes so calm and collected his skin dosent even get nerves. You could give Jon Gruden a wet willy at high noon  during OTAs and he wouldnt flinch he’d just think it was the players rap music that was turned up to loud and demand they put on his Travis Tritt casette instead. This is a coach.

10. The Brocket Ship signed with the Dolphins- the team that are sabermetricaly the closest to NASAs Kennedy Launch Center and I think this is truly the season he lifts off. He is reunited with Adam Gase- the coordnator he had back in Denver before he actualy started to play and everyone realized how bad he was. Brock is intimately familar with Adam Gase’s Bronco offense that is predcated on losing to the Patriots so he should be a natural fit in South Beach