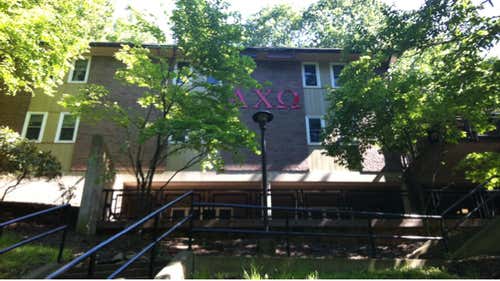 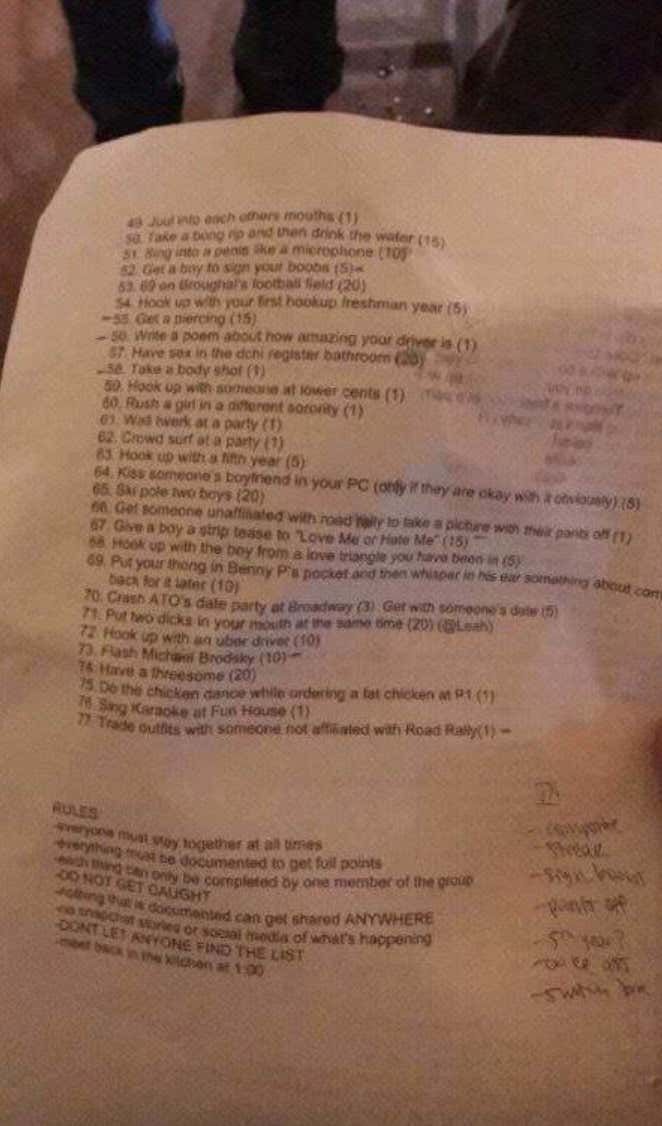 64. -Kiss someone’s boyfriend in your PC (only if they are okay with it obviously). Don’t know who have to be okay with it, I’m assuming the girlfriend. It couldn’t be the guy, right? No way he could be violated or anything like that.

72. Hook up with an Uber driver. Now this is PSYCHOTIC.

A tough day for all my Alpha Chi girls out there!

CBS Philly-A Pennsylvania university has kicked a sorority off campus due to what officials are calling a “reprehensible” scavenger hunt that involved drugs, alcohol and sexual activity.

Alpha Chi Omega’s Theta Chi chapter lost its recognition by Lehigh University for two years and will be banned from campus through May 2020.

The Lehigh Greek Community blog published by the university says the sorority hosted a December scavenger hunt in which participants were given a list of tasks that involved “the use of drugs and alcohol, sexual activity and other activities” that violate the Bethlehem school’s policy.

The sorority was suspended pending an investigation by a disciplinary committee that called the activity “reprehensible.”

Please tell me there’s an awkward local news video about this. Please. I need it. I NEED IT!

Cosmopolitan-The event, called the “Road Rally” likely “did not only take place this year, but there is credible information that this event has been going on for years,” a Lehigh disciplinary committee explained.

“Road Rally” is a decent name or an event like this, but I expect better.

Brown And White-“AXO created a situation that occurred on and off campus involving morally questionable quests such as a scavenger hunt, treasure hunts, etc.,” read the blog. “The acts described may not have been required for affiliation into the organization, but are clearly considered a rite of passage and a consistent part of membership in AXO.”

“Treasure hunts” is a HILARIOUS way to describe the Road Rally. Also, calling this not a requirement for affiliation but “considered a rite of passage and a consistent part of membership” is classic girl talk. Somehow, in the same sentence, opposite things are said. That’s sorority talk for ya. Sentences like that are why this GIF exists:

This is a tough day for any Alpha Chi Lehigh girl out there. You hate to see any sorority/fraternity kicked off campus, but I don’t think they left Lehigh many options with this one. This is also a loss for all the Lehigh guys out there for obvious reasons. Getting laid just got a whole lot harder.

The Road Rally is what you imagined college life would be like as a high schooler. You imagined your college life would be a lot like Blue Mountain State. Sex all the time. Parties 24/7. Maybe class here and there. Remember how young you were when you thought that? Then you got to college and realized pretty quickly that college is nothing like that as you sit on your friend’s, who you don’t like that much, uncomfortable couch playing video games.

Unfortunately, Alpha Chi did some serious cleanup work on all of their social media. I spent a decent amount of time trying to find out more about this sorority, but everything is either deleted or private on Instagram. You do have to respect this. They are the mafia in terms of covering their tracks on social media.

I kind of do respect these young ladies for participating in the Road Rally. This Alpha Chi was at Lehigh, which is the hilliest campus I know of in America. It’s next to impossible to be fat at Lehigh because of all the hills and steps you have to walk on your way to class/dorm. Doing a scavenger hunt must’ve been tough not just because of the tasks they had to complete, but also the journey in between the tasks. You need to train someway. Obesity is an issue in this country and Alpha Chi just took a creative way of combatting that. Also, if we are going to start banning sororities across America for taking Adderall/cocaine while sleeping with Brad from Sigma Chi and drinking absurd amounts of alcohol, all while maintaining a 3.33+ GPA, we won’t have any more sororities. Don’t blame Alpha Chi at Lehigh for making a game out of it.

That’s your spin zone for the day.