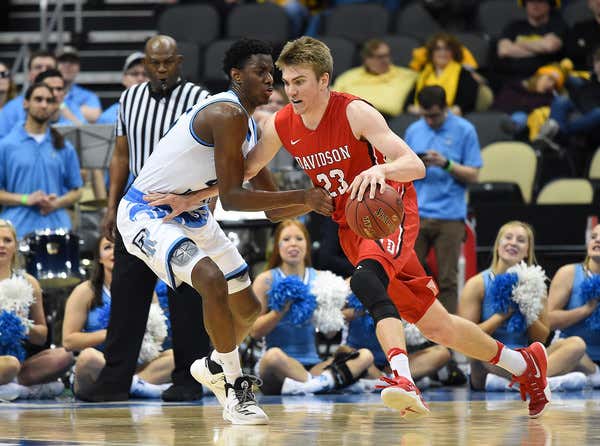 Davidson is one of the absolute hottest teams in the country right now and they are just clicking offensively. It shouldn’t surprise anyone that Davidson is playing so well offensively as Bob McKillop is a top-5 offensive coach in the country. Seriously, watch how well they move together, especially off the ball. The motion offense is a thing of beauty and when you have guys like Aldridge, Gudmundsson and Grady it becomes damn tough to stop.

URI on the other hand hasn’t looked the part as of late. Yes, they won against St. Joe’s and VCU, but they weren’t that dominant URI team we saw the first 3/4 of A-10 play. I expected URI to come out in the A-10 Tournament and just blow out the first two teams, especially after the two losses to end conference play, one of which was a 2 point loss at Davidson. In that game, URI actually collapsed down the stretch while Aldridge dropped 18/12 in that game.

The most important thing in this game today is going to be turnovers. Part of what’s made Rhode Island so great is its ability to force turnovers, something we saw in both A-10 Tournament games. They like to put pressure on guards and wings, blitz screens and jump passing lanes. It’s part of why they rank 5th in the country in turnover percentage. The other part here is the fact URI has a plethora of guards. They can be aggressive because of the depth, if there is foul trouble they are set up to be okay. Davidson on the other hand is one of the best in the country at taking care of the ball. That’s a Bob McKillop staple. They rank 7th in the country in turnover percentage and what’s more impressive about that is Aldridge and Grady both rank in the top-16 nationally at protecting the ball.

If URI can’t force turnovers, that means they have to get stops. Not the easiest thing to do the way Davidson shoots the ball. At the same time, can URI run Davidson off the 3-point line? The Wildcats are 6th in the country in 3PA/FGA while URI is 9th in the country in defensive 3PA/FGA. URI is going to need to communicate defensively here. Davidson gets open looks by running off double screens, flare screens and using Aldridge in a pop situation.

I’m going to take Davidson to win this game. URI has struggled in the first two games and if they struggle today, Davidson has the ability to really stretch a lead.