YIIIIIIKES! So the fighters here, if you’ve been living under a rock, are Gennady Golovkin (better known as GGG) and Canelo Alvarez, and they’re fighting on Cinco de Mayo. They fought once before on September 16th in what was considered one of the best pound-for-pound matchups in history, and lived up to all expectations and then some in a 12-round controversial draw. Since there wasn’t a clear winner the first time, we’re running it back on May 5th, and the press tour began yesterday. Off to an awkward start if we’re being honest! Here’s the exact moment where both men knew they’d fucked up: 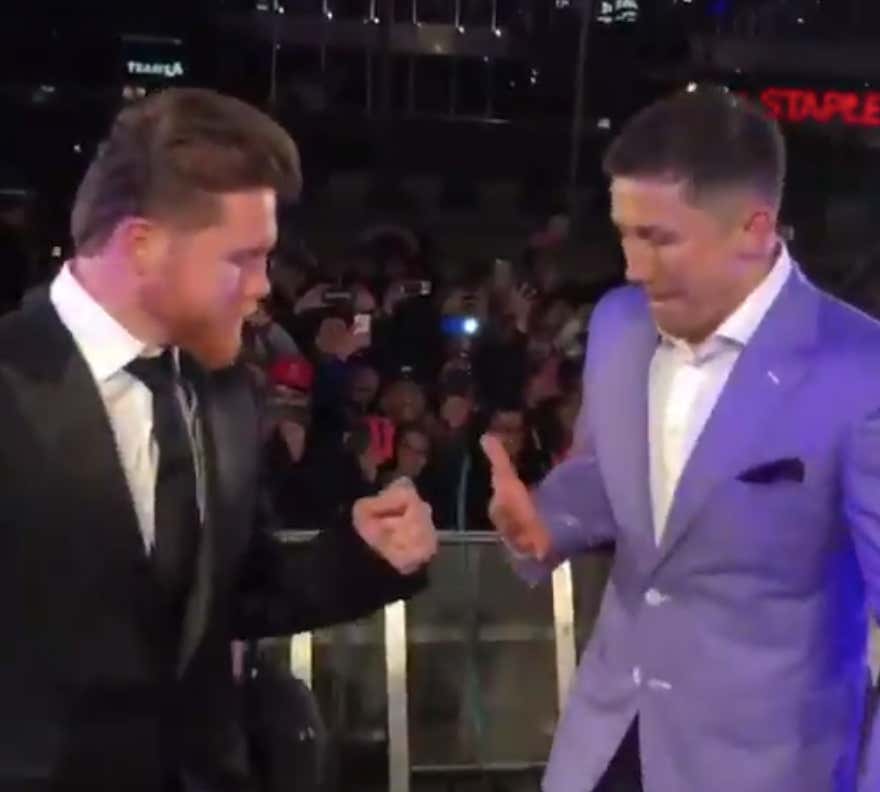 Golovkin could’ve saved both their asses with a quick grab of the fist if he followed it up with “Paper covers rock!” joke, but they just got caught in this conundrum instead.

I know these types of face-offs are pretty routine for the fighters at this point, but how could they be? Breaking things down to their core, you’re politely greeting a man who’s gonna try to hit you so hard that your entire body shuts down in a few months, possibly inflicting long-term brain damage on you. Oh, and throw in the fact that you both beat the shit out of each other a few months ago. He ate your best shots and you ate his. You now know the margin of error you’re playing with, and you know that this time around, somebody could easily be face down on the canvas while the world watches. Combat sports hold a dynamic unlike any other, man.

P.S. I have full on panic attacks about how to go in for the handshake every time I meet someone I’m a fan of, which happens pretty often now. Do I go in for the standard business-like one? We dappin it up? Fist bump? Half hug? FULL hug?! Standard but then throw my other hand on the person’s elbow/bicep to assert dominance? How tight of a hand squeeze am I putting on? I got the heart racing just thinking about it.