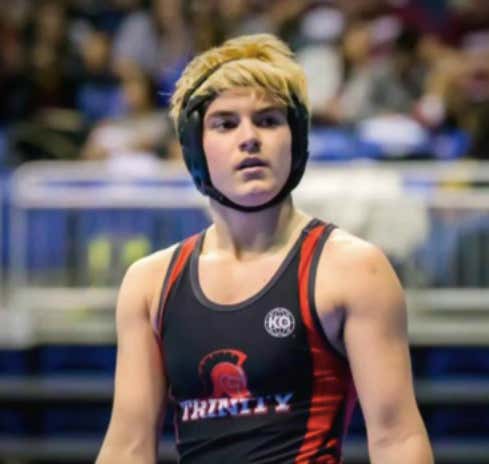 Source –  The Texas state wrestling championships  made headlines this weekend when a 17-year-old transgender boy — barred by state rules from competing in the boys’ league — won his weight class, against girls.

Mack Beggs, the teenage boy in question, hasn’t sought the spotlight. By all accounts he just wants to wrestle.

But media attention found him anyway. In part, that’s because some parents of female wrestlers have vocally objected to the fact that Beggs, who has been taking testosterone as part of his gender transition, is wrestling girls. One parent even filed a lawsuit against the league that organizes public school sports.

“He wants to compete against boys,” Merritt says. But under Texas rules, boys can’t compete against girls, and students must compete as the gender marked on their birth certificate. That meant if Beggs wanted to wrestle, he had to do it in the girls’ league.

Merritt says that every time Beggs won a match in his 110-pound weight class, the audience “erupted in both boos and cheers.”

As for the sports requirement that kept Beggs competing with girls, despite criticism from other parents, officials “don’t envision a change,” The Associated Press reports.

I was going to write about a butch lioness but I thought this story was more socially relevant. In short, Mack Begs is a trans guy (V to P) and people are upset because he’s kicking ass in girls wrestling. Which is understandable considering that he’s a guy. (In cases like Mack’s, genitals are essentially semantics so try not to get caught up on what’s between his legs.) The problem is that in Texas, you’re required to compete with the gender that corresponds with the gender on your birth certificate. Ninety-percent of the time it doesn’t present a problem, but every once in a while, a trans athlete destroys the competition so bad that people get upset. The outrage is typically silent and will come in the form of a snide remark or a toxic environment. Rarely is it as overt as it was in Mack’s story. These people hate him so much that they’re actually suing the school…for breaking a law that they voted in. Then booing him for following the rule after he asked to break it. Solid logic, I know.

There’s a notion out there that if we let trans people compete alongside their gender identity, other people will take advantage and it’s infuriating. No one fakes trans. And if they do you can tell.

Obviously, the school should’ve handled this by letting Mack compete against the guys but that’s water under the bridge. What’s done is done. Hopefully they do things differently going forward. And to the kids and parents worried about the competition aspect, yeah it’s probably unfair. Get over it. That’s life. Sometimes you get the short end of the stick. It’d love to hear from the parents who booed but I know we won’t. At any rate, best of luck to Mack in his next tourney. Kick some ass, dude.