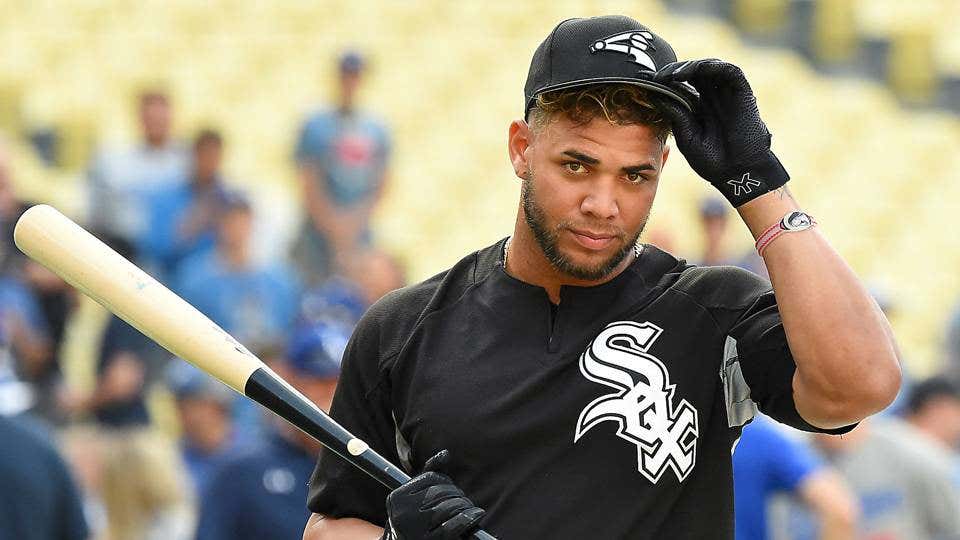 Ha!  Made ya click!  No, I don’t truly believe the Sox have officially bettered the Red Sox in the 2016 Chris Sale trade.  Not yet at least.  We still have the life of Chris Sale’s current contract (which expires after the 2019 season) to pick a winner or loser in that deal.

If you’re a Red Sox fan, right about now you’re probably sitting in a basement, beating off to an early 90s Marky Mark and the Funky Bunch music video and asking, “WSD how will we decide who won the deal? CHRIS SALE IS GOD AND THE RED SOX WON THE DEAL NO MATTER WHAT YOU SAY!” Also, the White Sox are trash, not allowed to be called the Sox, and no one gives a fuck about them.”

Well I’m here to answer that for you.

First, let’s talk about surplus value. A LITTLE ECONOMICS 101 FOR  Y’ALL.  Surplus value can be described as simply as “bang for your buck”.  If you’re a WAR guy, Chris Sale made $12MM and contributed 7.7 fWAR to the Red Sox in 2017.  That’s insane value for a starting pitcher.  As a reference, Clayton Kershaw was worth 4.6 fWAR in 2017 and made $35.5MM.  Anyone with a brain can tell you who was more valuable in 2017.  Assuming Sale stays healthy in 2018 and 2019, you can pencil him in for 5 WAR in each of the next two seasons, bare minimum, while making $27.5MM total.  It’s said that right now, 1 WAR is worth ~$8MM.  This fluctuates depending on a teams’ market size (a 1 WAR player is more valuable to the Rays than the Yankees, for instance), market conditions like supply/demand, etc.  With that said, simple math shows Chris Sale figures to produce like someone who should have made ~$140MM or so over the three years the Red Sox will have paid his salary. Instead, he’ll be making 28.2% of that.  Again, insane value for one of the premier talents in all of baseball.  Goddamnit do I love Chris Sale.

Then you have to factor in external, non-quantitative factors.  The Red Sox traded for Chris Sale to anchor the rotation on a World Series championship team.  If the Red Sox don’t win it all in the next to years, trading for Sale kindaaaaaa goes for naught.  Again, his purpose was to help them win a World Series.  Not the Wild Card, not the AL East, the World fucking Series.  This obviously doesn’t all fall on Sale, and it cannot be assumed at this time that Sale will be extended by the Red Sox once his current deal expires.  If he walks and the Red Sox traded away 2, maybe 3 legit talents for him, math could very well show the White Sox won this deal.  Then again, if the Red Sox win the World Series in the next 2 years, this whole point is moot.  They accomplished what they set out to do when acquiring Sale, even if Moncada and Kopech go on to win multiple MVP and Cy Young awards.

And therein lies the catch: if Moncada and Kopech go on to produce on average 3.5 WAR seasons a piece over the combined 5-6 seasons while on pre-arb salaries of about $535-750K, they’ll be producing as much as players who could expect about $85MM on the open market.  With the 2 of them that equals out to about $170MM…. all while earning about $3.6MM before they are arbitration eligible.  That’s about $166MM in surplus value between the two of them alone.

(Note: I didn’t assume Kopech would accrue an extra year of arbitration eligibility as a Super 2)

There are an obvious amount of assumptions made there, but the point remains.  Dollar for dollar, it’ll be tough for the Red Sox to “win” the Sale deal, unless the Win a World Series in the next two years.

I got a chance to see this kid up close last weekend.  He was the player who most stood out to me.  Here’s my personal tale of the tape on him: 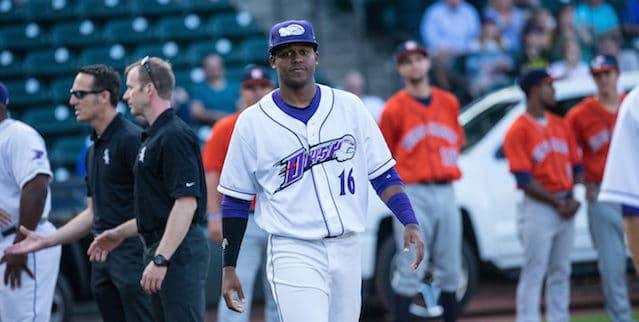 Listed at 6′ 160 pounds in 2017.  I’d say he put on an easy 20 pounds since that listing as he looked more 180ish.  He’s not a freak of nature physically like a Luis Robert, but has an athletic build nonetheless.  No fat, broad shoulders, room to add a little more weight if both he and the organization want him to.  He’s kinda built like a defensive back.  That’ll play all day

The kid can run, though he doesn’t have blazing speed.  Should be good to steal bases regularly, though he probably won’t ever top any charts should he become a regular once he gets to The Show.  Plus runner, not tooooo much more, but someone who can piss off other teams by taking extra bases, bunting for hits, swiping bags, etc.  Speed never hurts, and he has it.

FWIW this random dude on twitter told me he heard this about Basabe’s defense, so I’m considering it gospel

His defensive ability has been raved about in the White Sox organization, this much I do know from talking to a few scouts, not to brag.  He gets ++ jumps/reads on the ball and has the speed and instincts to play any OF position.  Here’s a video of a pretty solid grab he made yesterday in LF:

That’s obviously not the best catch in the world, not by any stretch of the imagination.  But the announcer made a point to say “Jacob May couldn’t make a similar play earlier in the game” or something along those lines.  Jacob May for those of you don’t know, has grade 80 speed.  What he doesn’t have are grade 80 instincts as an outfielder.  Give me someone who can read a ball off the bat but has less than exceptional speed over someone who can fly but doesn’t get great breaks on the ball every day of the week and twice on Sunday.  Aaron Rowand is a great example of the former.

What I didn’t know about Basabe is that he has a hand cannon of an arm.  Absolute howitzer.  I saw this play live on Saturday and my jaw legit dropped.  Watch the video below:

The camerawork here sucks, but you can see the end of the throw which is enough for one to visualize my point, for all intents and purposes.  The ball was thrown on a legit line, put right on the bag, and didn’t elevate more than like 6 feet off the ground.  It was incredibly impressive, and he made the throw completely flat footed.  I’ve watched a ton of baseball and it was seriously one of the most impressive throws I’ve ever seen. I’m not taking the time to dig around, but there can’t be too many better arms in MiLB.  All it took was one off balance throw for me to make that statement.

If you’re counting at home, Basabe possesses 3/5 tools that can be considered above average.  Awesome news.  But this is the part of the story that gets a little glim.  Or does it?  We don’t really know yet.  Basabe as a hitter is… not polished yet.  I don’t want to say he’s “raw”, as he’s walked at a decent 8% rate and gotten on base at a .345 clip so far in his MiLB career, but he has obvious flaws as a (switch) hitter as he’s struck out at a 27% clip and only has produced a career .730 OPS with a .640 OPS in 2017.  There is A LOT of development as a hitter for Basabe to get nice on over the course of the next few years.

Apparently Basabe was playing through a knee issue in 2017.  Obviously it wasn’t enough to keep him sidelined much, but I’ll give a 20 year old dipping his toes in the waters of HiA for the 1st time a mulligan.  On Saturday I watched him hit, and the pure “tools” are very well there.  Take a look at the at bat below:

Here’s what I love about this clip:

First and foremost, the pitch was a changeup, and a good one at that.  Baseball America said Mike Morin had the best changeup in the Angels system back in 2014. Before I even knew that, I could tell by hitters reactions his changeup was a + or better offering.  In his few innings on Saturday, he generated a good amount of swings and misses with it.

In this at bat, Morin fooled Basabe badly on an early in the count change piece, then tried to double down with it in a 1-2 pitchers count. Basabe recognized it, kept his weight and hands back, let the ball travel deep into the zone and drilled it to the opposite field.  His thought process in this very moment was perfect.  His swing was perfect.  Everything about the at bat was perfect.  This was a flash of the kind of player the Sox were hoping they acquired as the “other” piece in the Chris Sale deal.  Should he develop any sort of consistency as a hitter, it’ll be the perfect cherry on top of that trade.

OH SHIT… I think I just talked myself into Basabe developing into a switch hitting Jackie Bradley Jr.! Pray for baseball

I saw Luis Robert, Eloy Jimenez, Jake Burger and others all play live and in practice this last week, and Basabe has impressed me the most out of all of them thus far.  He doesn’t possess the ceiling of Robert or the floor of Jimenez, not by a long shot, but should he even become a quality 4th OF, the White Sox will have traded for two potential superstars and a quality depth guy.   Three core players for one.   All while paying them pennies on the dollar for their actual surmised value.

And believe it or not, the main purpose of this blog was to talk about Luis Basabe, not about who won the Chris Sale trade…. Kinda.  But we all know that for as long as Sale and Moncada/Kopech are playing, this trade will be referenced by both fanbases.

AKA yes, the White Sox won the trade.  Here’s a video of Kopech making a Big League lineup look stupid from yesterday:

The future is almost here and I cannot fucking wait