Source –  Video footage shows a man collapse in his snowmobile on an icy lake forcing him to climb out of the freezing water by himself.

A drone captured the man’s desperate fight for survival as he resorted to using two screwdrivers to claw himself to safety. The man was seen riding his snowmobile along the icy lake when just 15 seconds into the video it breaks the ice and begins to sink.

The man can be seen desperately trying to pull himself out of the freezing water and onto the ice. His water-logged clothes are clearly a burden as he struggles to pull his legs up onto the ice behind him.   It is not clear where this video was taken but the details posted along with the video suggest he was eventually rescued by the fire services.

Everything about this video terrifies me. The clearly too thin ice, the drone helplessly hovering above, the guy fighting for his life. It’s what nightmares are made of. I can’t imagine the level of fear he experienced when his sled started to slow down. He probably hit the gas, felt it bog-out, and shit his pants. At least that’s what I would have done. Just the thought of going under in all that equipment gives me goose bumps. If he didn’t have screwdrivers (not sure why he did) he would’ve been dragged under in a matter of seconds. Once his shoulders went under I thought he was done but he managed to drag himself back up. 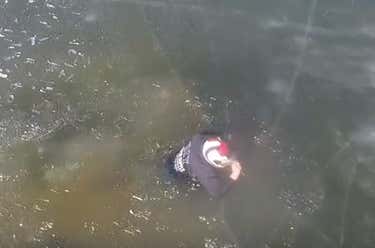 Luckily he was rescued so all’s well that ends well.

That said, kind of a weird move from the drone pilot, no? Your buddy’s fighting for his life – maybe put down the remote control and go get help. Guy may as well have lowered it onto his head and pushed him under. Must have been the most frustrating thing in the world. If I’m the snowmobiler I’m calling up Keith Morrison for an investigation the second my hands thaw out. He should at least be able to get a restraining order. At any rate, I’m glad this guy is okay. And make sure to stay off the lakes, kids. It’s getting warm.