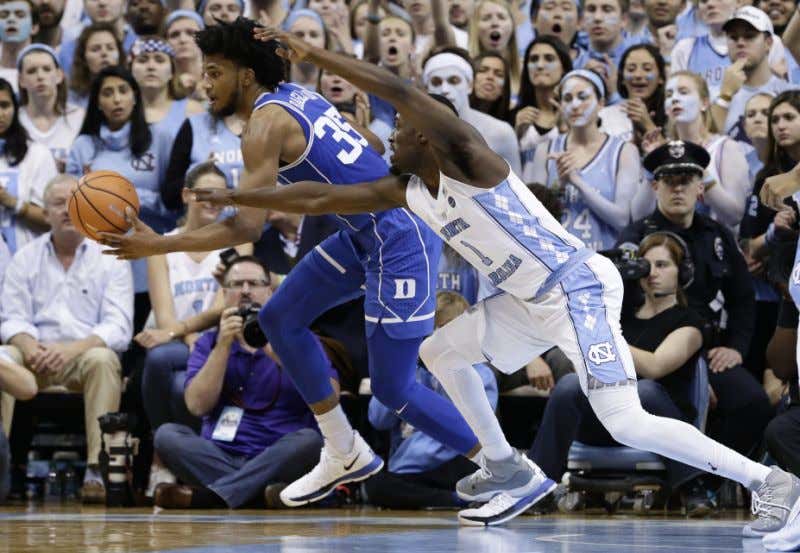 We’re now in the last full week of the regular season – unless you’re the Big 10 of course. That said, we’ll still use some Big 10 teams and storylines in this blog because, well, why not? This is going to be an FBI-investigation free blog due to the fact that’s the storyline across the country right now. Instead we’ll be looking at what’s going on on the court around the country in college basketball. Let’s get right into it.

The race for No. 1 seeds

Right now there’s really only one lock for a No. 1 seed. That’s Virginia. From there, Xavier/Kansas/Villanova/Duke/Michigan State are the teams currently the closest to fill out the next 3 spots. Then there are teams like UNC, Purdue and Texas Tech that have a slight chance to get to the top line, but need some serious help. I think Kansas is the closest to locking up the next No. 1 seed. Again, if you win the Big 12 this year, especially by multiple games you’re going to be a 1 seed regardless of the Big 12 Tournament. If Xavier wins the next two games to win the Big East outright, they would have a good shot at at 1 seed as long as they make the Big East finals. Even a loss to Villanova there for the 3rd time could possibly keep them there. Nova likely needs to win out and win the Big East Tournament to get a 1 seed. However, what happens if they win out and lose to Xavier in the Big East finals? Michigan State is a top-4 team, but the resume isn’t great simply because of Notre Dame falling apart and then the Big 10 being a disaster. That said, Sparty did their part by winning the Big 10 outright and a Big 10 Tournament title puts them in position with help around the country. UNC and Purdue would need to win out/win the conference tournament and get help from other teams to jump up to the 1 seed. Duke is in an interesting situation. They have a pretty impressive nonconference. If they beat UNC and then win the ACC Tournament, they could be in good position, similar to last year, to be a 1 seed.

National Player of the Year race

Less than a month ago it was all but a lock for Trae Young. Now, most will say he’s still the favorite and that might be, but you have a guy like Jalen Brunson playing extremely well. Not to mention Deandre Ayton – take out whatever is going on off the court – has been an absolute monster and is a lock for All-American. Those three are in a pretty tight race for National Player of the Year and it’s going to be fascinating to watch down the stretch here. I’d assume most voters will shy away from Ayton because that’s what voters do. You have Young and Brunson both putting up historical type numbers. Do the voters go for the veteran in Brunson or will they remember the video game numbers Young put up?

Speaking of races, National Coach of the Year:

Speaking of races, the National Coach of the Year is beyond entertaining, even if I’m a complete nerd for thinking so (hint: yes, I know, I’m a nerd). You have a bunch of quality candidates like Tony Bennett, Chris Mack, Chris Holtmann, Chris Beard and Bruce Pearl being the favorites so far. That doesn’t even include guys like Rick Barnes, Kevin Keatts, Matt Painter, Mick Cronin, Jay Wright and Mark Few who all should be considered as well. The fascinating thing here will be how voters look at Pearl. On the court he may have done the best coaching job this year, but you have his school named in the FBI documents. I’d personally vote for Bennett, considering what he’s doing with a Virginia team that many had outside the top-25.

Villanova has won the Big East every year since conference realignment. They are now needing help to do so if they want to win for the fifth year. After losing at Creighton on Saturday, Villanova is a game behind Xavier. The Musketeers end with Providence (home) and DePaul (road). Win out and they win the Big East. If they lose one, it opens up the door for Nova to get a share and would be the 1 seed in the Big East Tournament due to a tiebreaker. It’s not like Nova ends super easy though as they end with Seton Hall (road) and Georgetown (home).

Can Keenan Evans get healthy?

Keenan Evans has been battling essentially turf toe for the last 10 days or so. That’s not what you want to hear if you’re Texas Tech. The Red Raiders are a legit Final Four contender. As long as Evans is healthy. Tech can defend with anyone in the country, especially with its ability to rotate from the packline to a blitzing press. It’s actually rather impressive how they defend and how they can switch defenses at any moment. That said they can struggle offensively and having Evans bails them out. The problem is you can see his toe bothering him. He’s not as explosive as he was 3 weeks ago and it’s costing them a couple of points. Those few points could have led to a victory over Kansas. If Evans isn’t healthy, Tech could be in trouble early in the NCAA Tournament.

Kentucky is doing that thing again where it looks to be turning the corner late in the year and figuring shit out as we head into March. After losing four in a row, Kentucky got wins over Alabama, Arkansas and Missouri to put itself in 3rd place in the SEC and back into a top-5 seed in the NCAA Tournament. Closing the regular season with Ole Miss (home) and Florida (away) could get them 10 SEC wins and stay in that top-5 talk or a sweep could potentially move them into a protected top-4 seed. The question is, who the hell is this Kentucky team? Is it the one that gets lost defensively and stagnant offensively? Or is it the one we’ve seen the last couple of games, flying around, hitting shots and getting a guy like Kevin Knox to be consistent? To me, the biggest improvement for Kentucky has been the addition of Jared Vanderbilt and bringing him off the bench. He provides instant energy and gives Kentucky extra points due to his offensive rebounding strength.

What teams are ending the season on a high note?

What teams have ‘struggled’ down the stretch?

If you’re a fan of a bubble team there are four conference tournaments to really keep an eye on – the MWC, A-10, WCC and C-USA. Nevada is going to be an at-large team as long as it doesn’t lose its last two games. If they win out and lose to Boise State or UNLV, that’s a stolen bid. A-10, URI is an at-large team and St. Bonaventure is on the bubble. What happens if Davidson wins the tournament? Likely two bids stolen since many think both will get in. WCC, St. Mary’s is a bubble team and Gonzaga is an at large. C-USA is the interesting one. MTSU should be an at-large team if it loses in the conference tournament. WKU could get there with a win over MTSU this week. What happens if Old Dominion wins the conference tournament and WKU beats MTSU? That’s the one that can really end up stealing bids.

The AAC is shaping up for a showdown on Sunday, which could be really good for the conference. If Wichita wins at UCF on Thursday, it has a chance to win the AAC. That’s something that seemed like a bit of a long shot after Wichita lost to Temple on February 1. That loss gave the Shockers 3 in conference play while Cincinnati was undefeated. UC then lost at Houston and dropped the home game to Wichita. Now it sets up for the clear two best teams in the conference on the last game of the regular season. The winner will be the 1 seed in the AAC Tournament.