***This blog will contain very mild spoilers for ‘Annihilation’, any and all major spoilers will be preceded with a warning***

Hello and welcome back to Rob’s Monday Morning Movie Review! Sorry for the delay, obviously had bigger things to tend to this morning, but better late than never, right? Over this past weekend, I checked out ‘Annihilation’, a sci-fi movie written and directed by Alex Garland (‘Ex Machina’, ’28 Days Later’), starring Natalie Portman, Jennifer Jason Leigh, Gina Rodriguez, Tessa Thompson, Tuva Novotny, and Oscar Isaac. I’d been really excited for the film since I saw the first trailer, which was a great example of one that didn’t give too much plot away, but peeled the curtain back juuuust enough to make me feel like I NEEDED to see what was beyond the mystery presented, and I’m very glad I did. 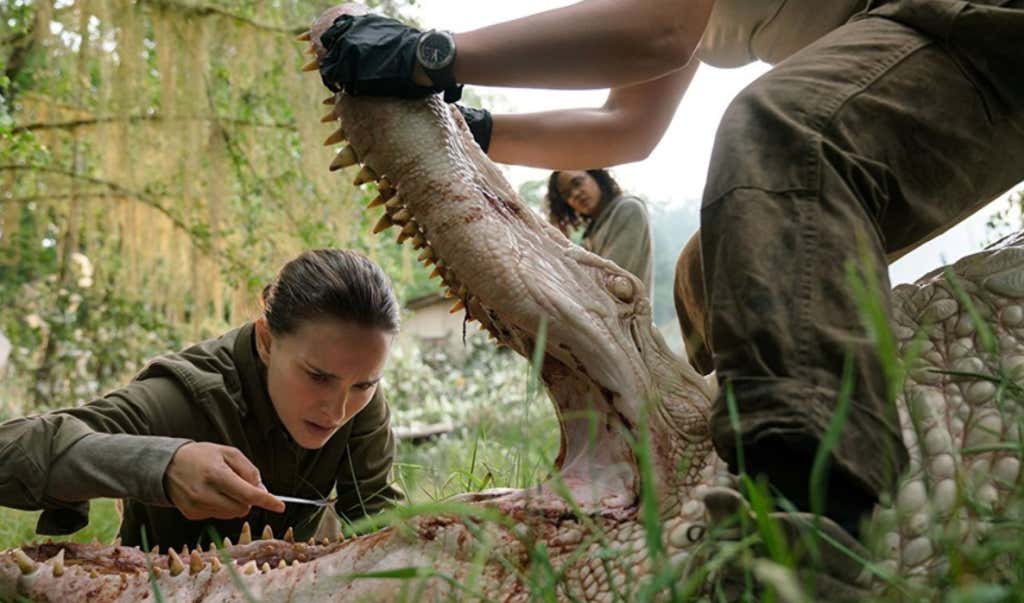 ‘Annihilation’ follows a biologist named Lena’s journey into “The Shimmer” along with a few other scientists as they attempt to discover the mystery of what’s inside after Lena’s husband, Kane, returned from a mission within in horrible condition. The Shimmer is a grassy, overgrown area of land with inter-bred species inside it surrounded by a bubble-like film where every solider (other than Kane) sent in has not made it out. There’s two theories as to why, one is that something is killing everyone, one is that something is making everyone go crazy and kill each other. As they journey deeper and deeper towards the lighthouse at the center of The Shimmer, more and more goes wrong for the team, and more questions than answers arise. 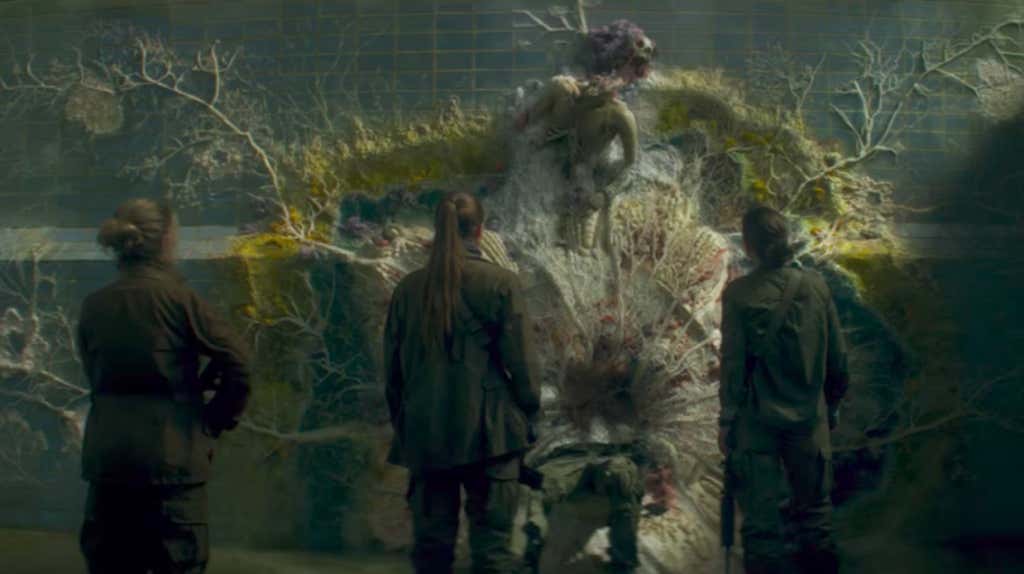 It’s a difficult film to talk about without diving deep into spoiler territory, but I’ll say this: ‘Annihilation’ isn’t gonna be for everybody. Based on this weekend’s box office numbers, it ain’t for a lot of people. It’s a thought-provoking, strange sci-fi that is slow-paced and focused way more on theme than plot. If you (understandably) go to the movies to turn your brain off for a few hours, stay away from this one. It’s something that I’m still trying to fully comprehend a full weekend later. That being said, I fucking loved ‘Annihilation’. Thought it was brilliant in so many different aspects. I think ‘Arrival’ starring Amy Adams is probably a good barometer for whether or not you’ll like this, but I thought this was even better all around. It features some of the most horrifying and tense scenes I have witnessed in a film in years, blends gruesome and beautiful imagery with unbelievably fluidity, explores fascinating ideas and concepts, and most importantly, has a payoff that lives up to the first 99% of the movie. That’s rare for these types of movies! Usually you get the “Well it was great until that stupid ending when things got wacky” reaction here, but for ‘Annihilation’, the ending is so well done and layered that this will reach the upper echelon of science fiction movies in 2018 for me without a doubt. The other facet of this flick I have to shout out is the sound design. Everything about the sound in this movie was mind-blowingly great to the point this’ll be a massive Oscars snub if they’re left out in that department – which they very well could be with a February release. I definitely give ‘Annihilation’ two thumbs up, recommend it, and will be seeing it again in theaters, but if you’re not a hardcore fan of the genre, it may wind up falling flat for you. 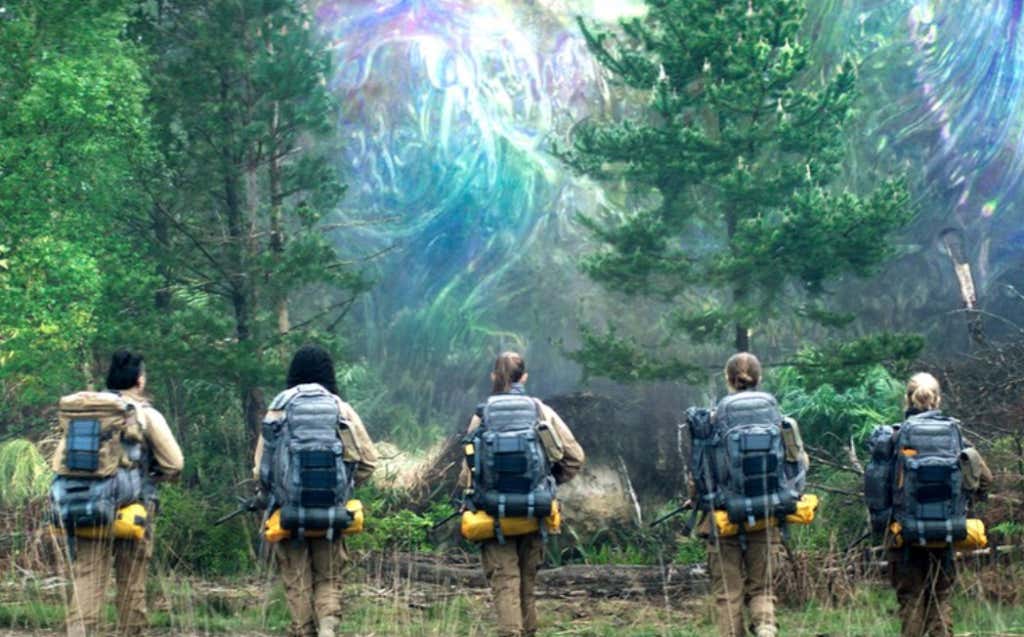 ***SPOILERS BELOW, TIME TO TALK ABOUT THE ENDING OF THE MOVIE***

***SPOILERS BELOW, TIME TO TALK ABOUT THE ENDING OF THE MOVIE***

Alright, so if you’ve made it down here, I’m gonna assume you’ve seen ‘Annihilation’ and want to know how I interpreted the finale of the movie, as both Kane and Lena’s eyes shimmer-ing is definitely a bit open-ended and the dynamics of the alien duplicate of Lena were a little hard to grasp on one watch. Upon reading a bunch of theories to help shape my own, here’s what I’ve settled on.

Kane = Alien Duplicate of Kane. Not really him. We saw the real Kane go crazy and kill himself with the grenade in the lighthouse. Amazing scene. I think this is cut and dry.

Lena = Real Lena, just permanently affected by the Shimmer. She’s got that ‘8’ tattoo now, her eyes are all shimmer-y, but she’s really her. Here’s why I think this: When she’s fighting her alien replica, who WASN’T trying to fight her, just trying to mimic her every movement (to “create something new”, remember, these aliens weren’t particularly malicious), it’s copying and absorbing Lena’s traits. She realizes this and relaxes after trying to barge through the door of the lighthouse, as she was crushing herself by resisting. She then places the grenade in the hand of the alien and pulls the pin, and as she’s doing this, it morphs from a faceless creature into a literal clone of Lena. I took this as a mental transfer as much as it was a physical transfer, and believe that Lena’s self-destructive personality was mimicked by the alien counterpart, and that’s why she didn’t resist holding the grenade and attempt to escape as Lena was doing. The alien was mimicking Lena’s psychology physically, by literally self destructing. That’s what I think, at least, although some do believe that the Lena getting interviewed by Benedict Wong’s character throughout the film is the alien Lena who changed the story up. I just don’t see why she’d reveal as much as she did if that were the case, though. Regardless of what you believe, I really dig that the movie was open-ended enough for these theories to come about.

Now, to speak on another spoiler, HOLY FUCKING SHIT THAT SKELETON-BEAR WITH SHEPARD’S VOICE WAS THE SCARIEST THING I HAVE EVER SEEN. I’m still so frightened that I don’t even wanna talk about it any further. You know what I’m sayin, we’ll leave it at that.