So this happened in last night’s Thunder-Warriors game. Zaza Pachulia again found himself in the middle of a controversy where he (in?)advertently injured a superstar player during a game. We have people watching and rewatching the play in slow motion like it’s the Zapruder film. Did Swaggy P’s foot clip Zaza’s knee and cause the big man to timber? 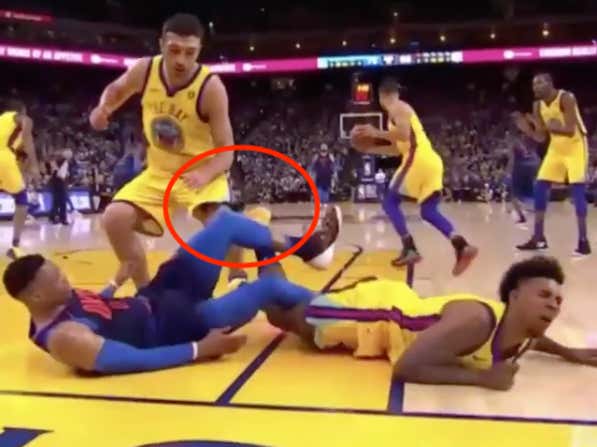 Or was Zaza just looking for an excuse so he could frog splash directly onto the knee of the opponent’s best player, who Zaza coincidentally also has some history with?

I’m pretty sure we know what Russ thinks.

Which leads us to the question: Is Zaza Pachulia a dirty player that has perfected the finesse flop so he Keyser Soze’s his way out of a suspension or fine? Or is he the Forrest Gump of NBA players, finding himself in the middle of crazy situations all the time?

Exhibit A is when Zaza ended Kawhi Leonard’s season and in a roundabout way, maybe sparked the beginning of the end of Kawhi’s time in San Antonio.

To complicate matters, for Exhibit B we have the time Zaza took out Kevin Durant last season, who just so happens to be Zaza’s own teammate. Again, is Zaza so dirty he would injure his own teammate to scratch that itch for blood? Or was it an honest accident like everything else?

Or I guess we can just watch this entire compilation of dirty plays by Zaza for Exhibits C-Z.

Lets ask people that were actually at last night’s game if they think Zaza’s play was dirty.

And how about someone that wasn’t at the game. 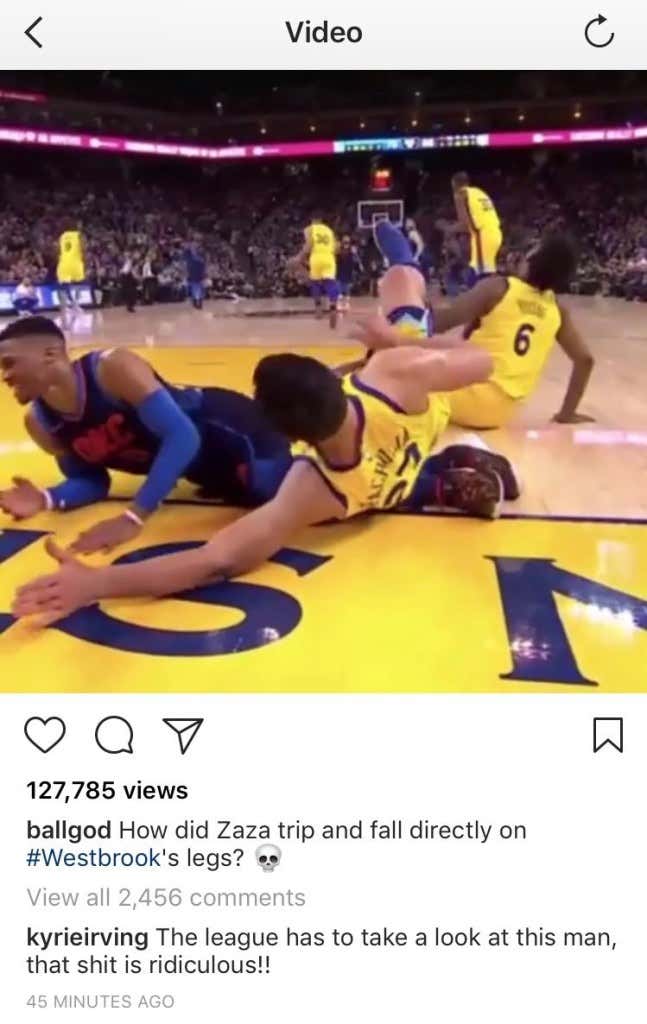 Is he clumsy, dumb, dirty, or a mix of some/all? The bottom line is the only person that knows if Zaza did this on purpose was Zaza. The unfortunate part of this for the rest of the NBA is that if Zaza was on another team, I’m pretty sure Draymond Green would have already castrated him for pulling this kind of shit on one of the Warriors. But if Draymond didn’t crush Zaza’s dick after he took down KD on some friendly fire last year, Zaza’s twigs and berries are safe as long as they are both repping The Bay. Maybe a Steven Adams chokeslam through a table would set Zaza straight. Or the Thunder signing Charles Oakley to a one-day contract before their next game vs. the Warriors would squash all this, as well as Zaza. But the bottom line is as long as Zaza gets away with these finesse plays that are definitely in the gray area of dirty or clumsy, they are going to keep happening.