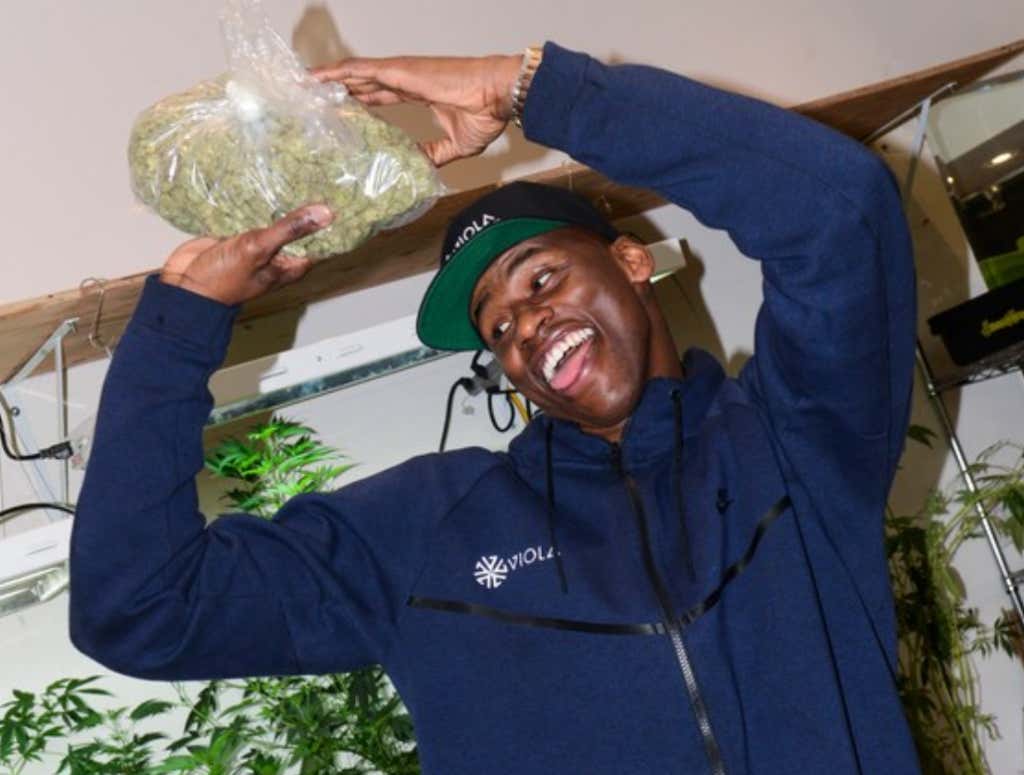 (GQ) – “We’re trying to get a billion-dollar exit,” Al Harrington tells me. This is not a crazy thing for the 6’9” former NBA journeyman to say; the hottest thing in the league these days, especially if you play for the Golden State Warriors, as Harrington once did, is to have a chunk of a tech startup. But Harrington’s billion won’t come from anything quite so disruptive. No, if Harrington has his way, he’ll get rich from something slightly more organic. Because Al Harrington is looking to become the league’s first marijuana mogul.

He thinks the NFL will allow cannabis in one therapeutic form or another inside of three years, and the NBA inside five. And legal pot, broadly, is said to be a $40 billion industry. Harrington wants a chunk of that business.

He’s here with a whole group of like-minded businesspeople, a half-dozen folks with cannabis concerns in Antigua, Canada, and, in the case of his former teammate Brad Miller, the same Oregon, California, and Michigan locations as Harrington. (Stephen Jackson, Harrington’s teammate in Indiana and Oakland, is here, too, ripping a joint on the sidewalk next to Harrington’s drop-top Rolls Royce, and declining a request to shout out a passerby’s YouTube channel.)

This interview was great, Harrington said a lot of the right things about how marijuana isn’t for everybody and that it isn’t some miracle plant that can fix every ailment under the Sun, all great and wonderful takes from Al. But two things stuck out to me which is the real reason I’m typing this and you, lovely reader, are partaking on this journey with me.

Firstly, thinking the NFL will loosen up their reigns on drugs before the NBA is one of the most preposterous things I’ve ever read. It’s so preposterous that he has to have some sort of inside information and it’s actually correct. Because from an outside perspective there’s NO WAY Goodell wants to be the first commissioner through that wall. Couple that with the fact that it’s already widely accepted the majority of NBA players already smoke weed while Josh Gordon missed three years of his prime and players such as Robert Nkemdiche and Chandler Jones ended up in the hospital from smoking synthetic marijuana in order to piss clean and dodge suspensions. The NBA has already found a system that works, which is essentially just never suspending anyone for using, which is seemingly a huge advantage over the NFL in this endeavor. It just doesn’t seem possible that Silver would get beat to this punch by Goodell.

Secondly, and more importantly to me, Stephen Jackson deserves his own television show. I know he’s on The Jump and still plays in The Big 3, but you talk about the more interesting NBA players from this millennium and it’s hard to come up with too many names before you land on Stak 5’s. I get they were writing a story about Harrington here but to make Captain Jack a parenthetical footnote is a big time disservice here. The man is on the streets burning it down completely ignoring some teen Youtuber and that in and of itself sounds like the opening scene to and episode of the basketball versions of BALLERS. What happened with the rest of his day? Did more teens nearly have their heads lopped off for requesting Youtube shoutouts? How many joints did he smoke posted up on that Rolls Royce? Again, I get that this piece was intended to interview Al Harrington but including that part about Jackson only brought up more questions than answers.