So the fallout continues for Arizona. Just hours after news broke of a wiretapping showing Sean Miller discussing $100,000 to get Deandre Ayton to Arizona, Shareef O’Neal has decommited. I gotta be honest though, I prefer the tweet he sent out last night (since deleted): 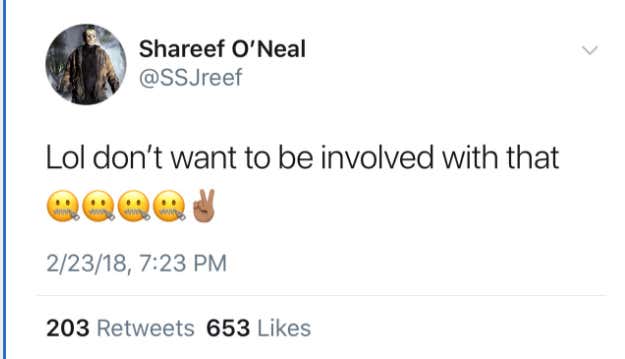 Everything about that tweet is perfect from the Lol to start and the emojis at the end. I mean let’s call it what it is. No top-player – O’Neal is a consensus top-35 prospect – wants to go play for a program that is now likely to face sanctions earlier than anyone else at the moment.

When O’Neal originally committed to Arizona, it was a bit of a surprise as most recruiting experts expected him to pick Kentucky. Shaq has gone on record talking about how big of a fan he is of Calipari. O’Neal was also considering the likes of UCLA, USC, Georgetown and LSU before he committed to Arizona.

Arizona now has just one commit from the class of 2018. That player is Brandon Williams, a 4-star point guard from California. Remember they also lost out on Bol Bol during the recruiting period when the original news broke about 4 months ago. It will be very interesting to watch the recruiting process this offseason.