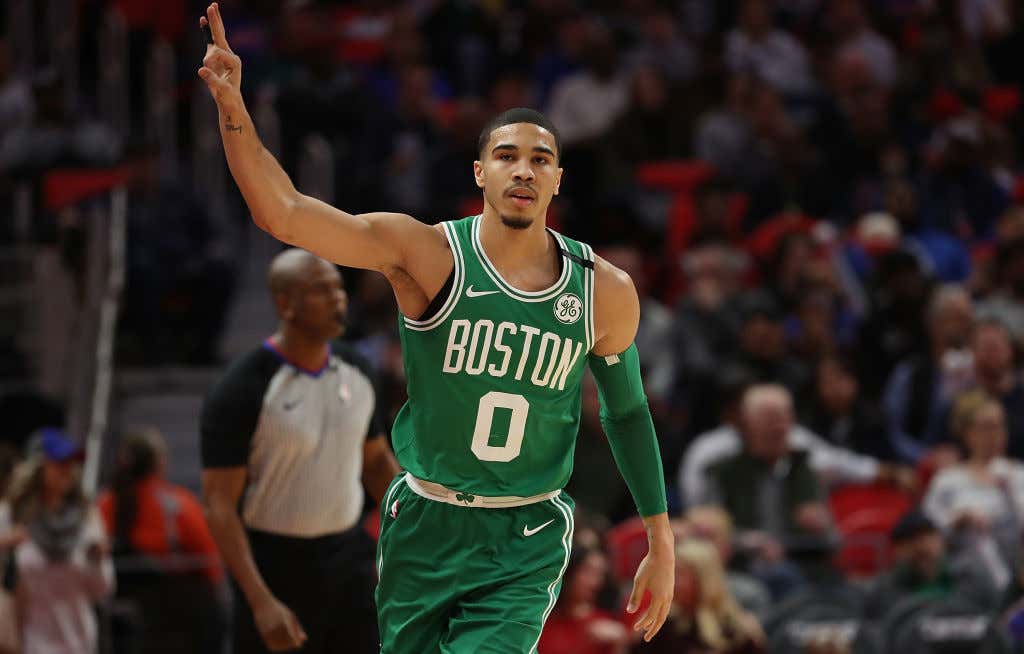 I don’t think I really need to explain why it was important that the Celtics came out from the break with great energy. If you’ve been paying attention to this team you already know they’ve looked like complete dogshit for a little while now. They had lost their identity on the defensive end, their offense continued to be one of the worst in the league, and things just felt off.

Now that the team was rested and back to full strength, it’s no surprise that they put in a performance that looked pretty familiar. This team last night looked like the early season Celtics and not the Celts of the last two weeks. There was energy, there was ball movement, there was defense, and to me it was comforting. No need to panic because no only did Brad figure it out but we were reminded just how good this team can be when they don’t play like a bunch of assholes. It’s actually fun to watch their games! Now I’d like to see this sustained over the remaining 23 games and playoffs before I start to let them off the hook, but based on how they had been playing I figured there was a 50/50 shot we would get the good Celtics last night.

But we did, and not only did they secure their 41st win, but also their 20th road win which puts them in a class with GS/HOU as the only three teams with at least that many and back within 1 game of TOR to regain their position atop the East. I dunno guys, but it feels to me like the dark days are over. Let’s talk about it

– For I think the first time in his Celtics career, we’re giving Daniel Theis the biggest honor one can receive. We’re starting the blog with him and his beautiful 19/7 on 8-10 performance

To say this was a much needed performance would be an understatement. Theis led all Celtics in scoring, made a couple threes, and as he always is was consistent and steady. If you are looking for a reason for Ainge to win the Executive Of The Year award, Daniel Theis is absolutely on that list. What a goddamn find he is turning into for this team. I had concerns about his ability to finish in traffic given his height, but the man just dunks everything it’s wild. He’s like the evil twin of Kelly Olynyk or something. He can still come out and knock down a three, but also is tough and can bang bodies down low. I love him.

On the defensive side, again Theis was solid and consistent. His 103 rating was more than acceptable, and when you break down his individual defense he held opponents to just 4-10 shooting. Blake went just 1-5 against him, and that’s a big time win for the Celts. He defended Blake on 24 possessions and gave up just 7 points. Who couldn’t love that?

– Speaking of defense, I have been saying from Day 1 with this team it’s the most important thing. I don’t care about the offense I don’t care about guys dropping 40, I don’t care about their ability to shoot the three. If they defend they win. Period. Well last night they help another team to under 100, something they did pretty much all the time when they were doing nothing but winning games. It was the 30th time it’s happened and guess what, the Celtics are 27-3 in those games.

So what changed? Well, allow me to move on to our next subject.

– If there was any doubt how important Marcus Smart is to this team, it is gone. Lineups with Smart in them were +30 last night, and he finished with a team high +15 and a final line of 12/3/6 on 5-9 shooting

They caused 13 turnovers which feels like the most they’ve had in months. As a defender he help opponents to 4-10 shooting which this team desperately needed from a perimeter player, and the second he stepped on the court he brought that energy and toughness that this team so clearly needed. What’s interesting about this performance was the change in his approach from the offensive end as well. I thought SMart did a great job using his size to attack the paint and get to the rim. As of lately, our guards hadn’t really done that for whatever reason. Now that Smart is back, the Celtics now have an absolute madman who has the size and strength to get where he wants when he wants to, and the fact that he was actually finishing the plays makes it all the better.

This team is clearly different when he’s not in the lineup and I am pretty sure Ainge will remember that come this summer. You don’t overpay something stupid, but you definitely do all you can to bring him back.

– On a night where the Celts needed their best offensive player to show up, Kyrie did for the most part. I thought he had a really nice all around performance with 18/5/6 on 50/44% splits, he got others involved at times, he knew when to take over at times, and even gave us a pretty good Fuck You Three late in that third quarter.

When you’re struggling like the Celts had been, and you come out of the break, you need a performance like what Kyrie gave you. To be honest just him and Jayson were the only starters to really show up (more on this later) and while he had some defensive issues that’s OK…for now. To me it was more important that he just lead by example on the offensive end and make good decisions, which I felt like he did.

– While other NBA players probably spent the break at clubs or partying or whatever, I’m glad that Jayson Tatum spent it by getting some goddamn sleep. It’s clear the kid was tired taking care of his baby, and his performance struggled. But now we got a rested Tatum and I’ll tell ya what folks, I like what I see

First and foremost, I like the 6-9 shooting (nice) and I feel much better seeing him go 2-3 from behind the arc. One of the more important players for this stretch run is going to be Tatum and his role as a secondary scorer, and what we saw last night will work. What I felt was different about Tatum’s night as opposed to what we saw a few weeks ago was simply how much more aggressive he was. It didn’t feel to me like he was just settling for his jumper. 4 of his 6 makes all came from inside the paint and if you’ve ever played basketball you know that’s how you snap out of a shooting slump. You play inside/out, which is what he did.

On the defensive side he held opponents to 3-7 shooting, and what’s crazy is Tatum played just 20 minutes. Brad talked about changes to the rotation and I think this was one example. He knows he has to keep Tatum fresh, so for him to be that effective in such limited time was pretty impressive.

– It was a very very rough night for Horford, but he held Blake to 1-9 shooting in this game. Some might say that’s pretty important to snagging a win.

– I want to be clear here though. The Celtics won this game because of their bench. As I mentioned 60% of their starters (Baynes injury) gave them essentially jack shit. The bench went on to score 65 (!!!!!!!!!!!!!!!!) points on 25-48 shooting. I don’t want to sound overdramatic, but that might be the best we’ve ever seen this bench group play.

You already saw Theis and Smart, but let’s not forget about the complete performances from Rozier (11/5/7)

Normally you’d expect a performance like this to come at home, so for these guys to do it on the road is all the more impressive. If you look at the list of net ratings for this team in this game, 5 of the top 6 are all second unit players. Fucking love that.

– As we’ve seen at times this season, when the Celtics play DET they get completely abused inside. Well, in this game, not only did the Celtics match the Pistons in second chance points, but they actually won the points in the paint battle 44-40. They also won the fast break and turnover battle. To me this says they played with great energy and had the right approach.

– Not the best offensive performance we’ve ever seen from Al Horford. I think that’s fair to say. Granted, he did go up against a more than formidable front line, but that’s not really an excuse in my opinion. He still should be able to give you more than 3 points. Going 1-6 isn’t great, and while he did have 4 assists and played great defense, I need more out of him on the offensive end over these last 22 games and playoffs. It has nothing to do with how much money he makes either. Even if he made $10M a year this would not be an acceptable performance and I would feel the same way. He was bailed out by the strong play of the second unit frontline, but that’s not something to rely on. He has to be better.

– You know even with Smart back, I wasn’t thrilled about the perimeter defense of some, mostly guys like Kyrie, Tatum and Rozier. Together they allowed opponents to shoot 13-19 against them. Kyrie/Rozier gave up 10 of those baskets and Ish Smith ate them both up repeatedly. I really can’t stress how important strong perimeter defense is for this team. Without it, our bigs get put on an island and complete disaster follows. Think of what the guard situation is with some of the top teams in the East, we cannot have this lack of resistance at the top of our defense from either unit.

– The same way Horford sort of was a non factor offensively, the same could be said for Jaylen. A 2-8 performance is never good, but the one thing that prevents me from being really annoyed was at least I liked his approach. Jaylen attacked the rim, with 5 of his 8 FGA in that area, he just needs to now work on finishing, but that’ll come. I care more about the mindset to not just settle for jumpers, struggle, and then still take more jumpers. At least he was aggressive.

– It’s OK, you can admit it too. This is a safe space. You were a little worried when the Celtics gave up 28 points and 52/50% splits in that first quarter. We all were.

– Would it have killed them to have Yabu available? Up 20 on the road on a back to back seems like the perfect time to exert his dominance. So annoying.

– Don’t think I wouldn’t ignore the 11-18 performance from the FT line. It may have not cost them the game like it so often does, but that doesn’t mean I have to like it.

We now immediately turn the page to a game again tonight against the Knicks at MSG or as I like to call it, Garden Jr. The Celtics own MSG and that’s not just me being a Boston homer, those are the facts

but we also know Beasley can single handedly beat them. The Knicks are 2-8 over their last 10 but are 16-12 at home so I’m going to need to see the same sort of energy and effort that we got last night so we can get back home for a nice little two game stint with some momentum before a big road trip. The good news is the good Celtics appear to be back, and last night reminded me how much I fucking missed them.