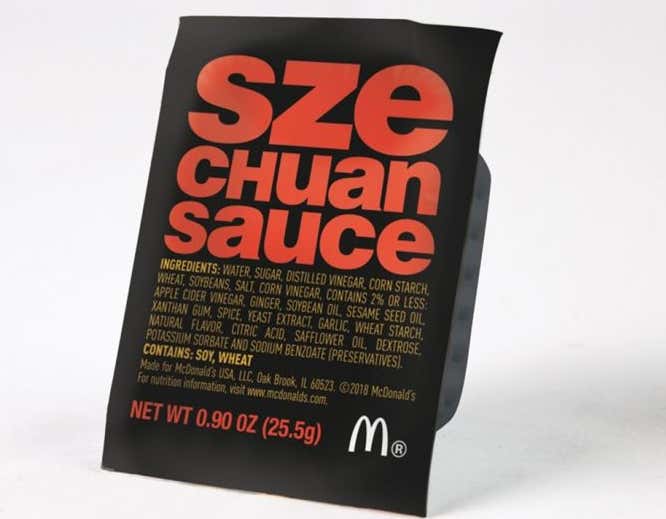 Fortune- McDonald’s is bringing back its Szechuan sauce again after an attempt to do so last year led to riots when not enough of the coveted sauce was available. The Szechuan sauce this time will be made available nationwide starting Monday, Feb. 26. McDonald’s will distribute 20 million packets of the sauce across every location in the U.S. to try and mitigate shortages.

McDonald’s Szechuan sauce, initially released in 1998 in a limited edition run to promote Disney’s Mulan, reentered pop culture last year when the cartoon scientist Rick obsessed over finding the elusive sauce on Adult Swim’s Rick and Morty. Demand for Szechuan sauce then grew among the show’s fans, who started a petition to bring it back.

The winner…and STILL champion of the worllllld: The Internet! If recent history has taught us anything, it’s that the internet having your back is more important than anything else. The internet is pretty much the awesome, rich, crazy friend that will try to help you out whenever you need it. I guess you can say the internet is Pat McAfee. And Twinkies would have been a distant memory if the internet didn’t all fired up that Twinkies were going to get killed a couple of years ago. Instead The Net (short for internet) rallied up the troops and now Twinkies are once again collecting dust at your local grocery store. Same shit with Mickey D’s Szechuan Sauce. If it was truly the greatest sauce in the world, it would have stayed in stores after Mulan came out. You know why? Because McDonald’s loves slinging nuggets and hammering your nuggets into dipping sauce is the most effective way to do that. I don’t go to Chick-Fil-A as much for the chicken or the waffle fries as I do to drown my sorrows and food in as much Chick-Fil-A Sauce as possible. Everything I buy from there is just a medium to get Chick-Fil-A Sauce into my mouth. McDonald’s tied the sauce to a forgettable Disney movie like Mulan and it was curtains for Szechuan Sauce.

That is until the internet’s current darling Rick And Morty brought it back to the public consciousness and then the World Wide Web did what the World Wide Web does. Yell about something until a corporation gives in to the barbarians at the gates. Internet 101. The internet may have killed Lady Doritos but it also brought Szechuan Sauce back. It’s the yin and the yang of life. Unfortunately internet petitions don’t work as well when it comes to GMs and owners in sports, but at least we can get our hands on Szechuan Sauce and Crispy M&Ms due to the hard work AKA virtual signatures of thousands of people.

So congrats to Szechuan Sauce fans as well as Rick And Morty fans. You guys can truly move mountains when you scream loud enough. If I was the creator of Rick And Morty, I would definitely try to dream up what to bring back next. I’m pretty sure we could get someone to bring dinosaurs back Jurassic Park style since there is literally no holes that can be poked into the “Add DNA to a frog” method. It’s your move, fellas.

And you have to feel like an absolute asshole today if you were one of those people that paid $50 for a packet of Szechuan Sauce on eBay or rioted when McDonald’s ran out of it during their limited rerelease last year.

I would lump Deadmau5 in there too, but I don’t think money is even real for him.