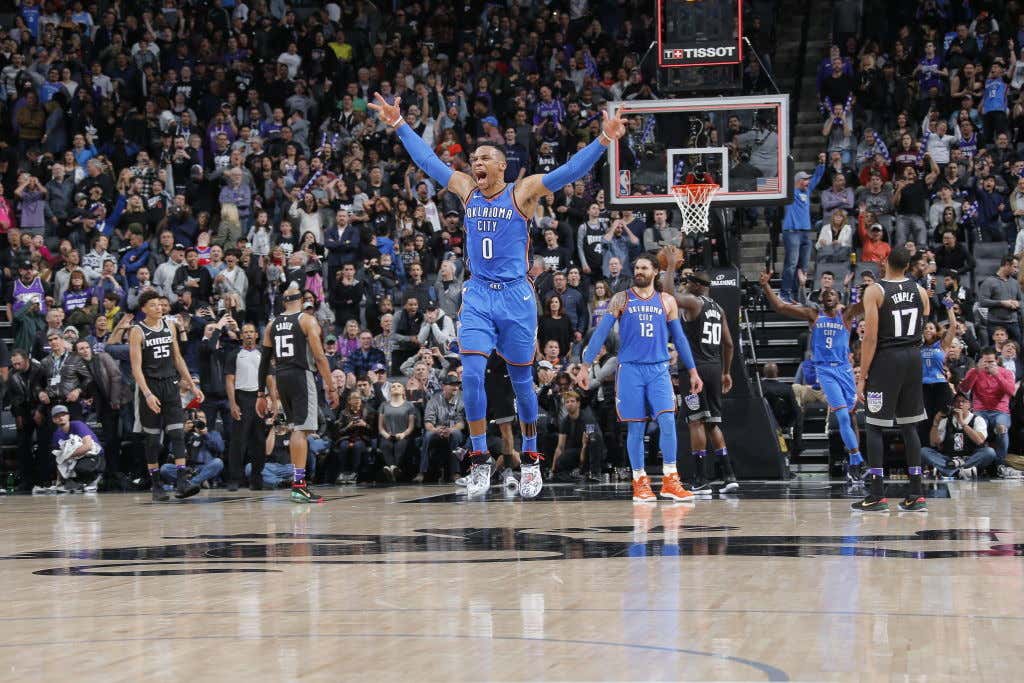 Finally! Welcome back everybody to another edition of Last Night In The NBA where we catch you up on everything that went down from the night before in the association. After what felt like years, the NBA returned to action and boy did it not disappoint. From here on out through the rest of the regular season these games will all be important, whether you’re looking to gain momentum for a playoff run or you are more interested in losing every day to improve your lottery position. We had 6 games last night and all but one of them was close, which is exactly what we deserved after going so long with no basketball. If you missed anything, here’s what happened

The only blowout of the night, both teams are heading for the lottery but there had to be a winner. Despite being a lost season for CHA, they do sit just 5 games back of the final playoff spot so you never truly know. Crazy things can happen. If they want to make the playoffs (I don’t know why they would), they’ll need more performances like what they got from their two best players. Both Kemba and Dwight were absolute forces

It always helps when your team finishes with 48/52% splits and you’re playing the pathetic Nets, and the Hornets have no won two in a row. Things would look a little different for them if they maybe hadn’t lost four straight heading into the break, but that’s life.

For BKN, I’m starting to think they may never win again, I mean look at this shit

They now are slating for the 6th spot, are tied for the most losses in the NBA, and have just 1 more win than the worst record. Remember the whole “the Nets will be better because they have no reason to tank” thing? Yeah, it doesn’t matter, they still stink out loud. I haven’t seen defense this bad since the last time the Celtics took the court if we’re being honest. I’ll give BKN credit, they did keep this close at times during the game, they did only turn it over 9 times which is good, and D’Angelo Russell looked OK and Dante Cunningham did work

but the reality is the Nets have the longest current losing streak in the NBA and it almost makes you think there’s some sort of collusion here. How big of a check did Dan Gilbert write them so that they’d get a high lottery pick in the event Lebron leaves? Everything is on the table for me at this point.

Another matchup between two teams who definitely did not want a win on their record, it looked early like the Magic were going to run away with this game. They came out and scored 41 in the opening quarter, and to me I just don’t think the Knicks have figured out how to tank yet, because it was right there for them to mail it in. Instead they decided to try, the dummies

The Knicks were 3 fourth quarter points away from having every quarter be at least 30 points, which is impressive since Porzingis is out and this team clearly needs to start losing games. That’s an interesting strategy that you don’t see too often.

Once the Magic saw the opportunity to tank, they took full advantage. They were even able to overcome some of their guys having great nights, like Fournier and Hezonja

You really have to be impressed with how Mario Hezonja has turned around his season. A guy most considered a bust given where he was drafted, he has been great in February, averaging 17/6/1.8 om 47/36% splits while making nearly 2 3PM a night. Something tells me this is closer to the player the Magic hoped they were getting when they took him so high in the draft. It’s pretty impressive the Magic were able to score this many points on a night which Aaron Gordon had just 9, but that’s what happens when you have 51/45% splits and make 11 threes.

But enough with the shitty teams, let’s get to the good ones.

Now this is what I’m talking about. The loaded with talent Wizards facing off against the what people were calling greatest basketball team ever assembled in the history of the sport, the new look Cavs. We heard all about how now the Cavs were the team to beat in the East after their trade, these new pieces are PERFECT and have put them over the top.

Then the break happened and guess what, they turned right back into pumpkins. The Wizards dropped nearly 60 points in the first half, and essentially got wherever they wanted. The new look Cavs somehow gave up an 18-3 run, which is weird because I thought since Isaiah was gone all their defensive issues were too? Very strange. Even without John wall in the lineup, the Cavs could not stop the trio of Beal/Oubre/Satoransky

When it came time for the fourth quarter, WSH did not collapse, instead they dropped 28 points. In fact, the only quarter the Wizards lost in this game was the opening 12 minutes. Not bad! This win was important because it now brings them just 0.5 games behind CLE for that 3rd spot in the East and keeps the H2H battle alive if there were a potential tie. Many left this team for dead once Wall went down, but they’ve been anything but. Credit them for keeping their season alive.

For CLE, look it is just one game, I just found it funny how after all the hype they got going into the break that the first game we see them their prized young new assets turned back into pumpkins. Hood/Clarkson/Hill combined to go 8-24 in their home debut, and really as usual, only Lebron showed up

A lot of the same issues CLE had on the defensive end still exist, so by no means are the Cavs fixed in my opinion. They obviously had to make a move to save their season, but I think people got a little overboard. An engaged Lebron is still the most unstoppable player in the league, but remember, they added role players not stars. Rodney Hood and Clarkson are not guys who are going to shoot 50% from three for the entire year. This looked a little more like who they had been all year, so I’d say the reality is they are somewhere in the middle of where they were pre break and what we saw last night. Don’t tell that to Cavs fans though, they declared themselves the best in the East again just a week ago.

Listen the city of Philadelphia is unstoppable right now. Wins after wins after wins, you pick the sport. You have to give them credit for that, and pulling out a win in a game you were losing by 5 with like 30 seconds left is always impressive. Being 6 games over .500 I’m pretty sure is the best PHI has been all year, so they are definitely peaking at the right time. I suppose it helps when your basketball freaks do basketball freak things

and shooting 51% with just 9 TOs is no joke. At this point even though he’s not a true rookie, it will be highway robbery if Simmons doesnt win ROTY, and Embiid is showing no signs of fatigue which you love to see if you’re a Philly fan. The Sixers have now won 6 in a row and are starting to separate themselves from the 8 seed, now just 0.5 games back of MIL for 6th, and really just 2.5 games back of the 3 seed. If they keep playing like this, they could still snag homecourt in the first round.

For CHI, I’ve said it a lot in this blog, but the Bulls are executing the perfect tank. I mean PERFECT. Keep playing entertaining games, get some good production from the young guys, and still find a way to lose so you don’t mess up your lottery chances. All tanking teams should take a look at what the Bulls are doing and try to emulate it. They got a beast performance from Bobby Portis,

and shit even David Nwaba had a career night with 21

This is a form of tanking I think we can all get behind.

Nothing like a game winner to help you avoid a complete disaster loss. As you can expect the OKC Big 3 shook their dick last night, combining for 66 points. Westbrook shot like dick for most of the night, still had a triple double and came up with the biggest shot of the night

and you combine that with Steven Adams who went 9-12 from the field, all the OKC guns were firing

In my opinion this win was big for the Thunder not because of who they played, but because of how they have been playing lately. Just 4-6 over their last 10, they needed this win so they could stay close to SA/MIN, both of which have been playing shaky basketball of late as well. The 3 seed is very much still in play for this team, and the battle with MIN is interesting because of the H2H record. If OKC wants to pass MIN they’re probably going to need a better overall record as a tie would do them no good, so finding a way to avoid dropping a game against the pathetic Kings is important.

For SAC, you really have no business trying to win games, so Kings fans can’t be mad at how this turned out. Not only did you have an entertaining game, but ZBo turned back the clock with a dominant 29

The Kings are currently slated for 5th in the lottery, and with everyone at the bottom of the league so bunched together this was an important loss for them. Now relying on SAC to pick the right young stud is a whole other issue, but at least they didn’t ruin their chances at the possibility of getting the pick wrong. That’s key.

Newsflash that isn’t really news. The Warriors are fucking ridiculous

There is not a team on the planet that can beat the Warriors when they shoot 63/56%, make 14 threes, and also go to the line 35 times. That is like playing 2K on rookie mode or some shit. Utterly ridiculous shot making by everyone involved, if this is what a rested Warriors team looks like then what the hell. Never having a quarter under 32 points just doesn’t seem real, and not that the Clippers are some lock down defensive team, but they are still made up of NBA players right? This looked like the Warriors were being defended by the Chippewas.

For LAC, listen I commend them for keeping things close. Most teams when being shat on by the Warriors like this lose by like 40, so to only lose by 7 was impressive. It’s not even that they played bad, 127 points on 50% shooting wins you the game most of the time when you’re playing a regular team, so the Clippers should hold their head up high. They’re just 1 game out of the final playoff spot so things are still OK for the most part.

Granted if these two teams ever meet in a series, I’m not sure the Clippers win a game so you have to wonder if that’s even worth missing out on a mid lottery pick.

And that’s it! It felt great to have basketball back in our lives again, and we’re right back at it tonight with 11 games on the schedule. Some good matchups tonight like BOS/DET, MIL/TOR, MIN/HOU, MIA/NO, and SA/DEN to name a few, and as always feel free to go live your life on this Friday night and I’ll tell you all about it tomorrow.