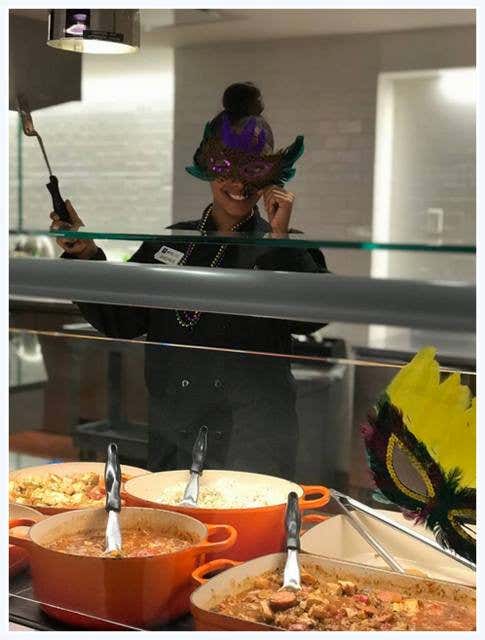 New York Post-New York University served up a “Black History Month” meal at one of its dining halls — complete with watermelon-flavored water and collard greens — and had to apologize when students called the school out for playing into racist stereotypes.

College of Arts and Science sophomore Nia Harris wrote on Facebook she was shocked to learn what was on the menu Tuesday at the Weinstein Passport Dining Hall on University Place.

“This is what it’s like to be a black student at New York University…” she wrote. “In 2018, I literally had to explain why displaying watermelon and koolaid in celebration of Black History Month was not only racially insensitive but just ignorant.”

It is with great sadness and frustration that I even have to send this email. Earlier today, I walked into Downstein, and noticed that the teme was Black History Month.

College dining halls LOVE to have themes. They can’t consistently make good food on a regular day, but don’t worry, that Easter Sunday themed dinner is going to be decent! The unseasoned, dry grilled chicken is undercooked 95% of the time, but when that Thanksgiving themed night comes around you almost getting salmonella is forgotten!

With that all being said, I have never seen anything close to a Black History Month theme. Maybe the dining hall will put up photos of famous civil right leaders like MLK, but I couldn’t even imagine a dining hall offering Black History Month-themed food. For this to happen at NYU, which is also celebrating White Guilt Month, is shocking.

The menu was interesting with ribs, collard greens, cornbread, smashed yams, and macaroni and cheese. However, the most interesting part of the meal happened to be the drinks. As beverage choices today, there was red Koolaid and watermelon flavored water.

Being curious, I went down to inquire about who was in charge o setting the menu for today, and after being bounced around from person to person I was finally put in touch with the head cook. I forget his name. When I asked who was in charge of today’s menu, I was told “I got together the cooks who are black and from here and they put this together.”

This is such a bad response the cook should’ve just said fuck it and hit her with a “you see this isn’t racist at all. I have a bunch of black friends and I got all the cooks who are black together last weekend and we went to Black Panther. After it we talked about the menu.”

“This was confirmed by a cook informing a student that it was red Koolaid. It was also sitting right next to the “soul food.”

Not even trying to hide the racial undertones.

The stupidity here goes beyond the racism. Did Aramark, NYU’s dining provider, think they were at a college in the middle of Mississippi?! Nothing can explain the menu choices, but for this to happen at NYU, a utopia for SJW’s everywhere, is next level crazy. Not only did you not prepare for the test, but the test is worth 80% of your final grade.

Lastly, in response to the watermelon water, he told that they do fruit flavored water all the time. This happens to be true but its usually cucumbers, pineapple, lemon, honeydew melon, and I’ve even seen apples.

“And I’ve even seen apples” got me. Very, very funny comment. She should’ve honestly just said, “yes, there is fruit flavored water all the time, but it’s usually full of white people fruit I aint never heard of.”

So, it seems that the NYU dining hall’s plan for March-January is to make McKenzie with her Louis Vuitton handbag from Scarsdale can feel at home/her country club with cucumber water but when February comes around time to take out the damn watermelons!

Not sure what this controversy will result in, but I can tell you what it won’t result in and that’s the quality of Aramark food getting any better.