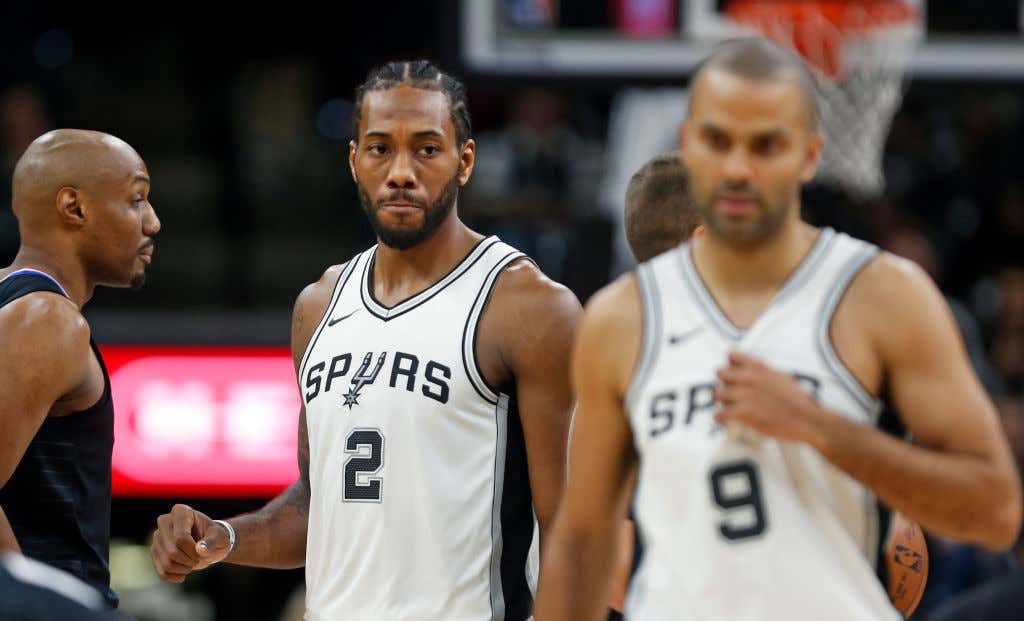 You know how you can tell this has been a crazy NBA season? Almost nobody had really been talking about what was going on between Kawhi Leonard and the San Antonio Spurs. It was kind of like “eh we know he’s hurt, the Spurs are just being the Spurs and resting him for when it matters, seen it a million times”. We as fans but this way down the list, especially with some of the other storylines of the season like the Rockets, everything Lebron and the Cavs, the Fultz situation, Golden State, more Lebron, etc. But then came Woj, who dropped what was a nice little bomb on Wednesday. In that story a few things stood out

Leonard has been medically cleared to return from the right quad tendinopathy injury, but since shutting down a nine-game return to the San Antonio Spurs that ended Jan. 13, he has elected against returning to the active roster, sources said. If Leonard returns, it will be because he has decided he can manage the pain of the injury, according to the sources.

Well hold on a minute. I thought Kawhi wasn’t playing because he was hurt, now your telling me he’s been medically cleared? That’s weird. Then you had Popovich say this in his media session late Wednesday

Done for the season? Make no mistake, Kawhi Leonard is a top 5 NBA player. This is a very very big deal involving one of the best franchises in the league. Basically this situation is the biggest story nobody is really talking about. Here’s why this is so important, later in that Woj piece was this nugget

The injury, rehabilitation and timetable for a return has complicated the Spurs and Leonard’s relationship, causing tension and fraying the fabric of what was once a strong partnership, league sources told ESPN. The uncertainty surrounding this season — and Leonard’s future, which could include free agency in the summer of 2019 — has inspired a palpable stress around the organization, league sources said.

Say what now? There’s being beef between Kawhi and SA and the possibility that it could jeopardize his future is not just something to gloss over. Remember the Spurs have the option of giving Leonard a supermax up to $219 million dollars before he hits free agency in the summer of 2019. Now, do they rethink that option given his injury or potentially look to move the player before they even get to the supermax stage, like what happened with both Boogie and Jimmy Butler? If we’re talking about a top 5 level player hitting the market or being up for sale, that’s a franchise changing occurance. The Spurs are in a really tough spot, ideally Kawhi would be healthy and they sign him to his extension. But if they don’t want to give him that supermax, they have to trade him. You cannot let him leave in 2019 for nothing. That means they basically have this summer to figure it out and potentially strike a deal. The longer they wait into the 2018-19 season the less his return will be. The problem is not a lot of teams have the assets that would justify the trade. That hurts their leverage as well.

It just isn’t every day that a player of this caliber could potentially hit the market. Kawhi is just 26 and in the prime of his career which is why this is such a huge story. The Spurs, who have basically been a model franchise their entire existence is now at a crossroads that could potentially shape the NBA. If I had to guess, I bet they offer him the supermax and this is all for nothing, but it’s definitely no longer a situation we can just sit back and ignore.