The Czech Republic defeats Russia 1-0 in the Winter Olympics to win the Gold Medal in the first tournament with NHL players. Leading the way for the Czech was goalie Dominik Hasek who made 20 saves in the final. Neither the USA nor Canada medal as the USA struggled from the start, while Canada lost the Bronze Medal game to Finland, after their 2-1 semifinal loss to the Czech Republic.

The Olympic Games continue to grow and accept the use of professionals as the NHL season goes on hiatus for the first time to allow their best players to participate in the winter games in Nagano, Japan. The hockey tournament with NHL players was among the most anticipated events at the XVIII Olympic Winter Games, as the top six countries had their own dream teams.

Canada went into the games as the favorite, with a roster full of some of the greatest players in NHL history, including Wayne Gretzky, Patrick Roy, Martin Brodeur, Ray Bourque, Scott Stevens and Steve Yzerman. Russia was without several star players as they refused to participate due to a feud with the Russia Hockey Federation. 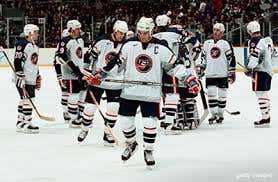 Team USA may have been the biggest disappointment in the 1998 Olympic Men’s Hockey Tournament as they lost two of three preliminary round games, and were eliminated in the Quarterfinals by the Czech Republic 4-1. Making matters worse several Americans including Jeremy Roenick were accused of trashing their rooms in the Olympic Village.

Canada rolled through the early part of the tournament, winning all three games in group play, outscoring their opponents 12-3. In the quarterfinals, Canada beat Kazakhstan 4-1. Looking unstoppable, Canada moved on to face the Czech Republic in the semifinals. Meanwhile, Russia defeated Belarus 4-1, while Finland beat Sweden 2-1.

While Canada had a roster full of NHL stars, the Czech Republic just needed one NHL star to turn things in their favor, goalie Dominik Hasek. For two periods, neither team was able to score as Hasek and Patrick Roy. With just over ten minutes left, the Czech Republic took the lead on a goal by Jiri Sleger, Canada would answer with 63 seconds left in the game on a goal by Trevor Linden. Tied 1-1 the game went to a shootout where Robert Reichel as the first Czech shooter beat Roy, while Hasek stopped all five shooters from Canada, Theo Fleury, Ray Bourque, Joe Nieuwendyk, Eric Lindros and Brendan Shanahan. The Czechs moved on to the Gold Medal Game, while Canada was forced to fight for the Bronze Medal.

In the Gold Medal Game, The Czech Republic would take on Russia, who beat Finland 7-4 in the other semifinal. Once again, Dominik Hasek was masterful stopping all 20 shots he faced. The game was scoreless again at the end of two periods as Mikhail Shtalenkov was nearly as strong. With just under 12 minutes left, Petr Svoboda scored to give the Czechs a 1-0 lead. It would be the only goal scored in the game, as the Czechs won their first ever Gold Medal in Olympic hockey.

Canada meanwhile lost the Bronze Medal game to Finland 3-2, as they appeared to be flat following their gut-wrenching loss to the Czech Republic in the semifinals. When Team Canada got home, Coach Marc Crawford was heavily criticized for not using Wayne Gretzky and Steve Yzerman in the shootout.