Could J.D. Hammer look any more like a J.D. Hammer? He’s obviously got a hammer, and judging by the glasses, he’s probably got a J.D. too. He’s got the kind of look that would make Wild Thing from Major League feel like a bitch. Somewhere Charlie Sheen is banging seven gram rocks just to feel like a man again. 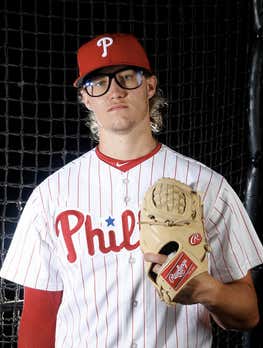 J.D. Hammer (one of those names where you have to say the whole thing) is probably not going to make the roster. The Phillies picked him up in the Pat Neshek trade with Colorado and assigned him to Clearwater, but if his persona and not his pitching ability are any indication of how he’ll ascend through the minors, he should be in Philly by September.

Another interesting development on the young spring training is how jacked our manager is and how pudgy our backup first baseman is.

If Tommy Joseph were born in 1895 he would be going head to head with Babe Ruth to be the best player in baseball. Alas, he he’s alive today and stuck backing up Carlos Santana like a rhythm guitar.

Philadelphia and it’s teams have been on a heater in the last few weeks. It looks like the Phillies are going to pose a serious threat to our hot streak. They are projected to be mediocre, but who knows how powerful this good juju is?

From Jason Kelce to Charlie Manuel, it seems like Gabe Kapler is doing all the right things. If he sneaks J.D. Hammer onto the 25-man roster, we’ll know that it’s real.