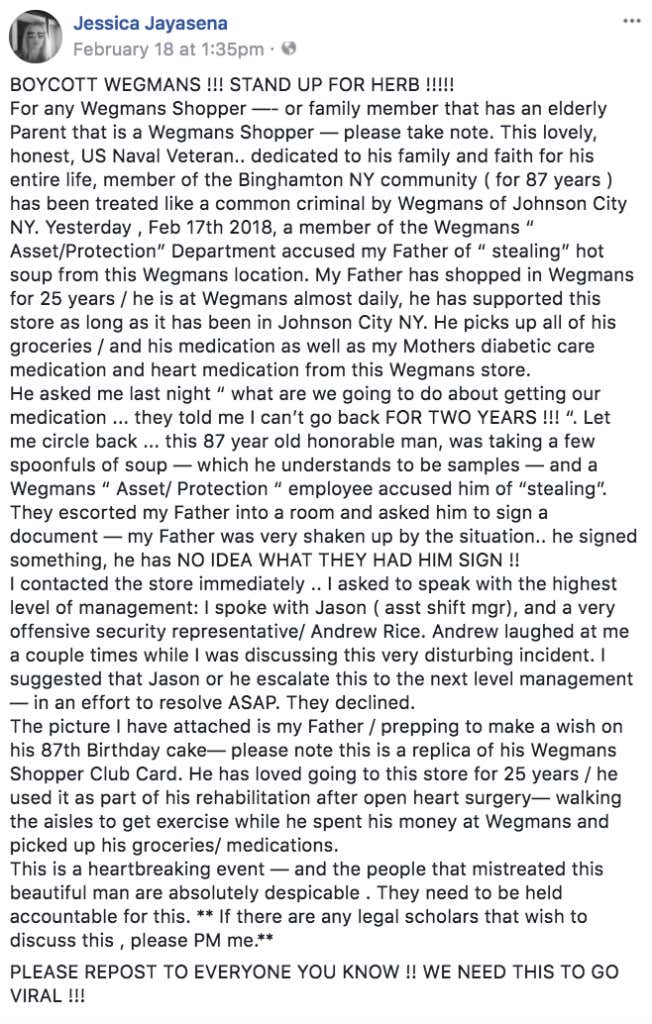 Source- An 87-year-old man has been invited back to an Upstate New York Wegmans grocery store after he was banned from the premises for sampling hot soup last week. In a viral Facebook post that has since been deleted, Maureen Singer said her father, Herb, was booted out of the Johnson City Wegmans after a member of the store’s Asset/Protection Department accused him of “stealing” hot soup. Singer also wrote that he was made to sign paperwork he did not understand, and told he could not return to the store where he also gets his medication from the pharmacy for two years.

She admits that Herb did take a “few spoonfuls of soup — which he understands to be samples.” It was not clear if he was using the same spoon or a different spoon for each sampling. She also describes her father, a military veteran, as a loyal Wegmans shopper who has visited the same store ever since it opened. She said he even had a Wegmans Shoppers Club-themed birthday cake for his most recent birthday.

Singer attempted to resolve the matter by contacting the store, but said she was treated rudely by the security representative she spoke to. After Singer’s post began going viral among community members, she posted a followup, stating that one of Wegmans’ Senior Vice Presidents had been in touch with the family to apologize for the matter. The Wegmans representative assured the family that the team at the Johnson City Wegmans would receive further training to ensure that “every customer is treated with respect and dignity” going forward.

As the resident food (read: fat) guy here at Barstool, I obviously have a lot of lover for grocery stores. While some people like to go in and out, I take great pleasure in my time walking the aisles as some of my favorite 80s easy listening music plays above and absolutely dominating the sales and free samples.

Which is why this story hurts so much. No person on Earth should be punished for free samples. Everyone knows that free samples taste a billion times better than if you made the food yourself. I don’t know if it’s because someone else made the food and it’s free or those little white cups are laced with endorphins. But free samples are better than regular food. That’s a just fact, Jack. Costco can make buttered toast taste like heaven when it’s free and served in a 1 inch by 1 inch square. For Wegmans to go full Soup Nazi and take away this guy’s soup before exiling him from a grocery store for two years is as unAmerican as it gets. I don’t want to get grim here on this comedic blog, but ol’ Herb (classic old man name btw) may be shopping at the big supermarket in the sky soon. Let that man live and enjoy his twilight years. He shouldn’t have worry about finding a new go-to grocery store at the 87 years old. He needs to be on a routine. Do you really want to tell some old man that he has to start driving to places he doesn’t know? Now you are putting everyone else at risk, Wegmans! And even if the soup wasn’t a sample but instead a buffet food that Herb wanted to “try”, that’s not a 2 year offense. That’s not even a 2 day offense. Let he who never ate a piece of loose candy or pistachio nut at the grocery store cast the first stone. How could you get mad at an old man that looks like this? 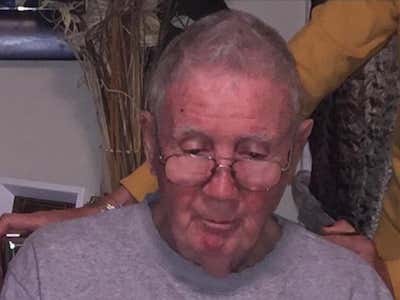 Speaking of Wegmans, how about their role in all this? Everyone I talk to that grew up around a Wegmans tells me how great they are. Best grocery store on the planet. Produce so fresh it’ll tell you to smack it’s ass. The Wegman family is the nicer than the Brady Bunch. Blah, blah, blahhhhhh. Well that perfect little grocery store threw our friend Herb to the curb simply because he wanted to load up on a tiny bit of soup. SOUP. We’re not talking filet mignon or shrimp cocktail. SOUP!!! If you can’t let some sweet old man eat a couple of spoonfuls of free mushy soup, you don’t deserve to have any customers. Add in that this is his stop for medicine and you can pretty much book the Wegman clan for attempted murder. I can promise you that Stew Leonard wouldn’t throw an old man into an interrogation room like he is ancient Pirate Simon slurping on soup instead of pirating porn.

HOWEVA, if Herb was actually double and triple dipping his spoon into a community bowl of soup, he should be banned from all Wegmans for life. Thrown in jail even. We live in a society for Christ sake. No amount of Facebook Keyboard Warriors would be able to spin that type of bad publicity. But unless I hear any different, I am #”Team Herb” for life. 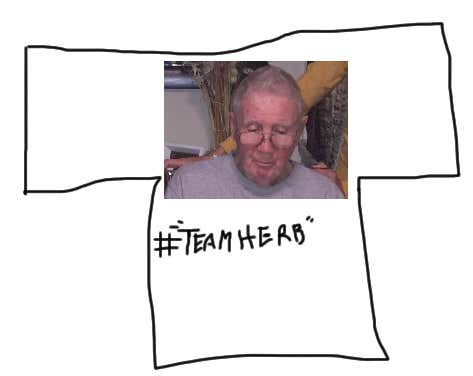