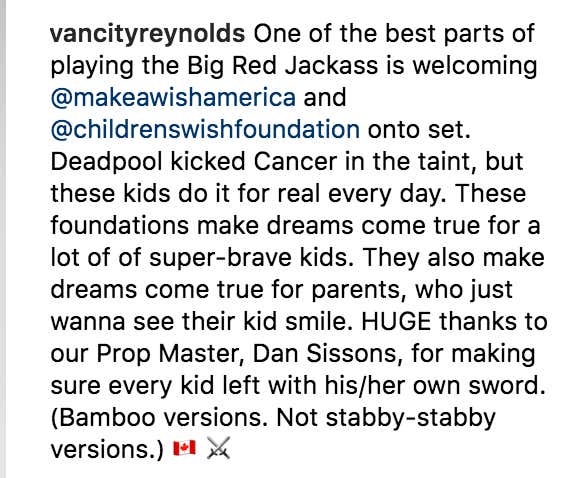 Earlier today Ryan Reynolds posted an Instagram showing pictures of him with Make-A-Wish kids making their dream come true of meeting the hilarious man behind the Deadpool mask. These kids don’t have much going for them unfortunately as they battle cancer every single day with seemingly decreasing hope. Reynolds took the time out of his I’m sure busy day to meet with each and every one of these boys and girls to give them a glimmer of hope and put a smile on their faces. Reynolds’ character Deadpool was dealt with multiple forms of incurable cancer in the movie and overcame it to become a super hero. Sure, it’s a movie, but they do say overcoming these diseases is partly mental. When you give up the will to live it also hurts you physically and makes your chances of overcoming the battle seemingly impossible.  Reynolds might be the perfect inspiration for these boys and girls. When he posted these pics on Facebook and Instagram some commenter decided to post a now-deleted asshole response:

The fan responded, “Guys Deadpool is an R rated movie and those kids are watching it…I think something is wrong here,”

Boy would I hate to be that person’s son. You’re dying of cancer and you can’t even watch an R rated movie? Because why? You can’t give me a real reason for why a kid who has maybe months to live can’t watch Deadpool. Fuck that person. Reynolds noticed the comment and responded perfectly…

“Yup. Deadpool is Rated R. If my kid went through a fraction of the sh*t these kids deal with daily, I think they can watch whatever they like. That’s just my .02 cents.”

That’s my Deadpool. You’ll probably think this isn’t worthy of a blog, but I just can’t believe there’s a person out there that wouldn’t let one of these poor kids watch one of the more entertaining movies out there, one especially that features a dude who defeated cancer. A laugh out loud comedy that would probably make these kids’ days. Let the kids live a little while they can for Christ’s sake. Once again, Ryan Reynolds is the man.