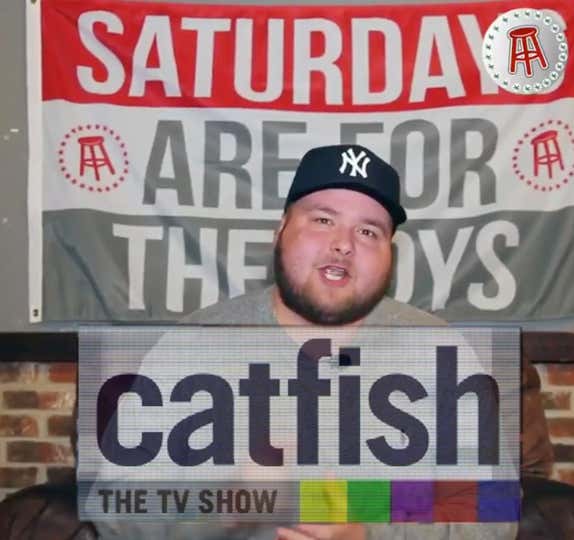 EDITORS NOTE – THE TOP PART OF THIS BLOG IS WRITTEN BY JacMacCFB.  MY EDITORS NOTE IS AT THE BOTTOM

Here at Barstool, we have an awesome viceroy program ran by Tyler O’Day, Kyle Macchi, and Dylan Stone (Tex). They oversee 250 college accounts ran by kids who attend the school. Throughout my time as an intern, I’ve helped out the three of these guys with various small tasks while they take care of the big stuff and grow the program. There are lot of great viceroys, but my personal favorite has been Ohio State’s Big Ev:

I mean look at this guy, electric:

Fast forward to today. I am walking into the office with the voice of Fordham Tom Scibelli and I saw a large man waiting outside the building Barstool offices wearing a Hawaiin shirt and shorts. To my surprise, it was Big Ev. As we took the elevator up to the office, Big Ev mentioned he was here for an interview with Gaz, who created the college program years ago, for “content.” The always inspirational Big Ev gave us a mix of Tony Robbins & Al Pacino in Any Given Sunday as he walked to the office:

“Wake up today and make your motherfucking dreams come true. Don’t take no from nobody….so much can change, so fast.”

Little did Big Ev know that his remix of Dave Walks To Work was very foreshadowing of what was to come. Everybody was surprised to see Big Ev, especially Tex, whose viceroy region includes Ohio State. He does live in upstate NY, so maybe he was here because he came home for the long weekend? Nope, he made it clear he was here for to interview for a “content” position. All of the viceroy managers were shocked when they heard about this interview. Nothing against Big Ev, but Gaz would’ve most likely let Tyler, Tex, and Kyle know that he was bringing in viceroys for full-time interviews. So, Tex asked Gaz about the interview. Turns out Gaz had zero idea about this interview. Why? Well, it never existed. Big Ev was punked. Tex took Big Ev into the radio room to ask him what the hell happened. It turns out some random number texted Big Ev out of the blue a week ago, pretending to be Gaz. 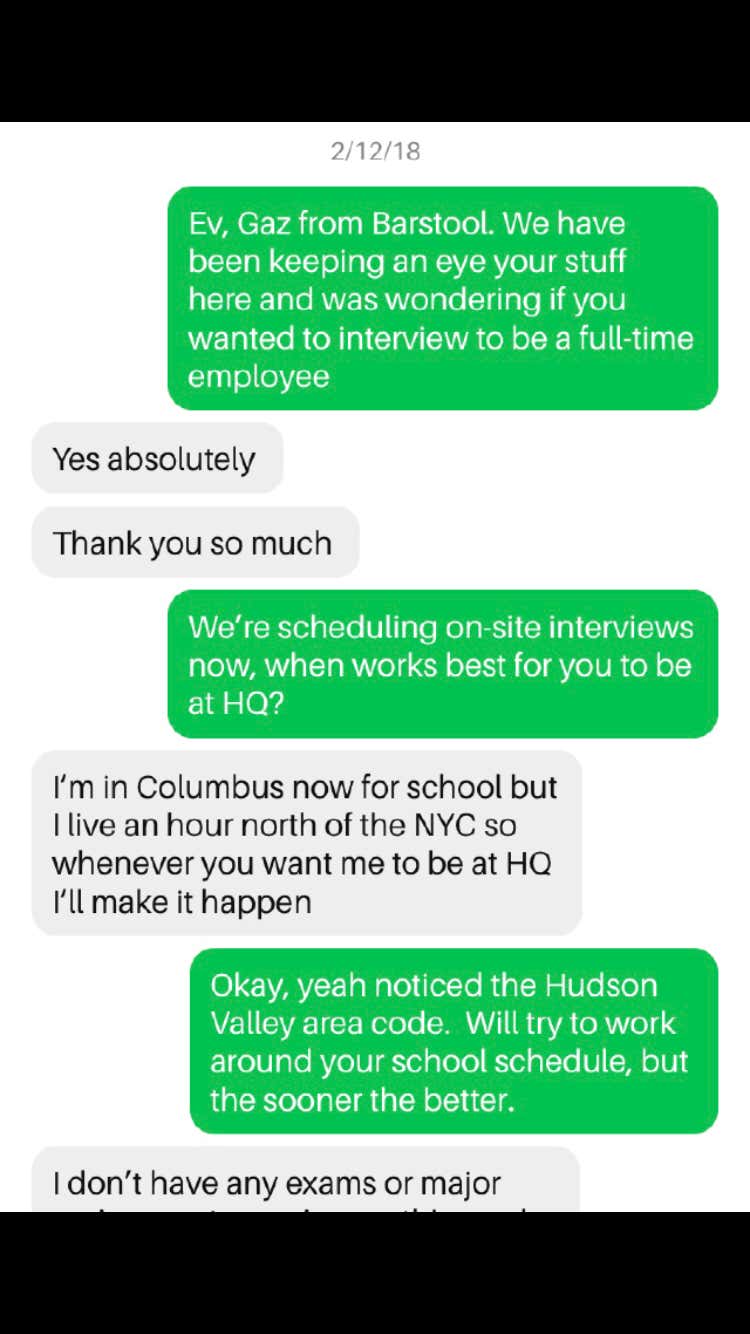 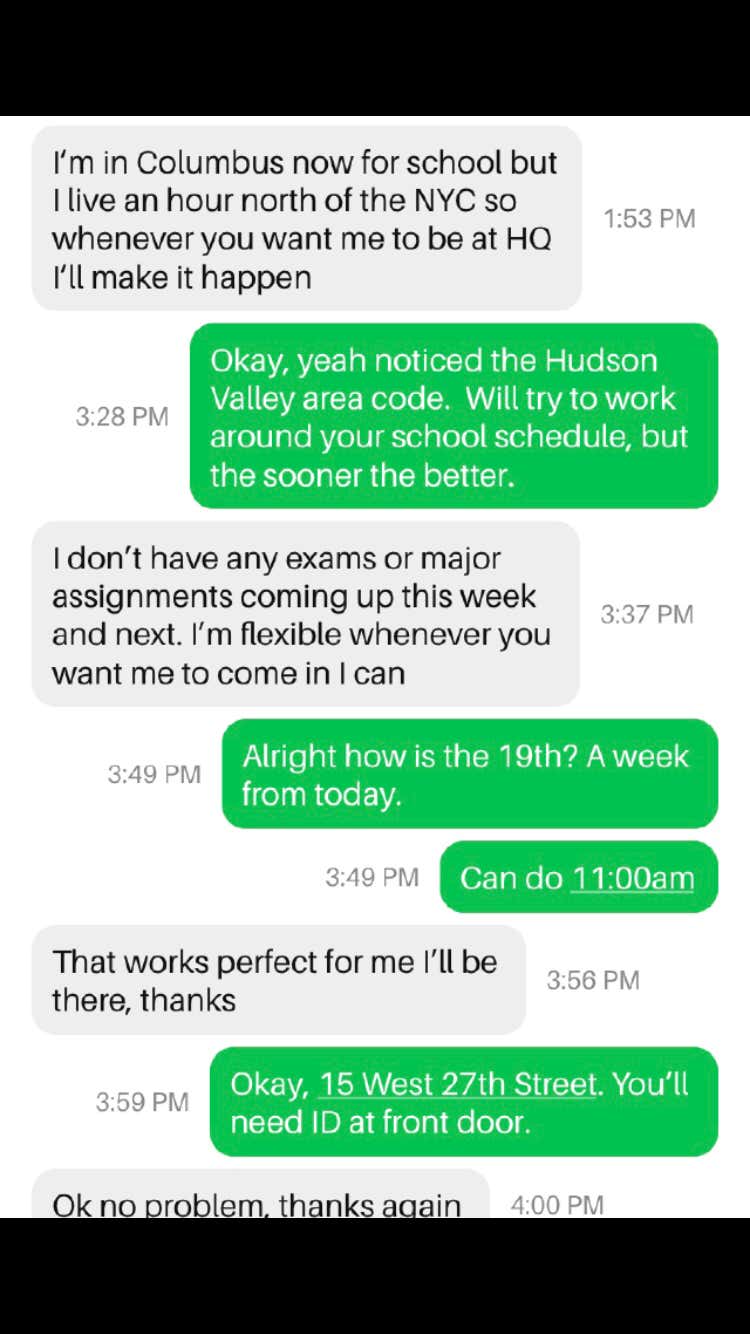 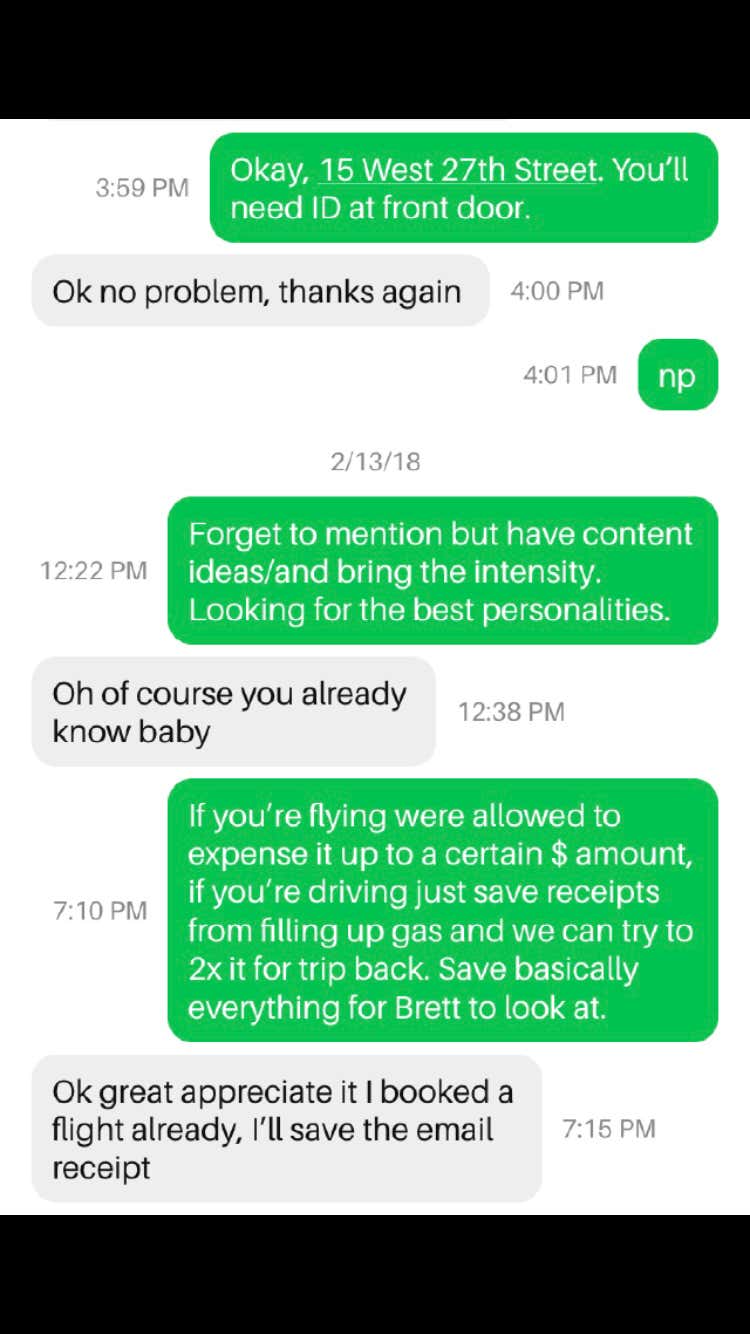 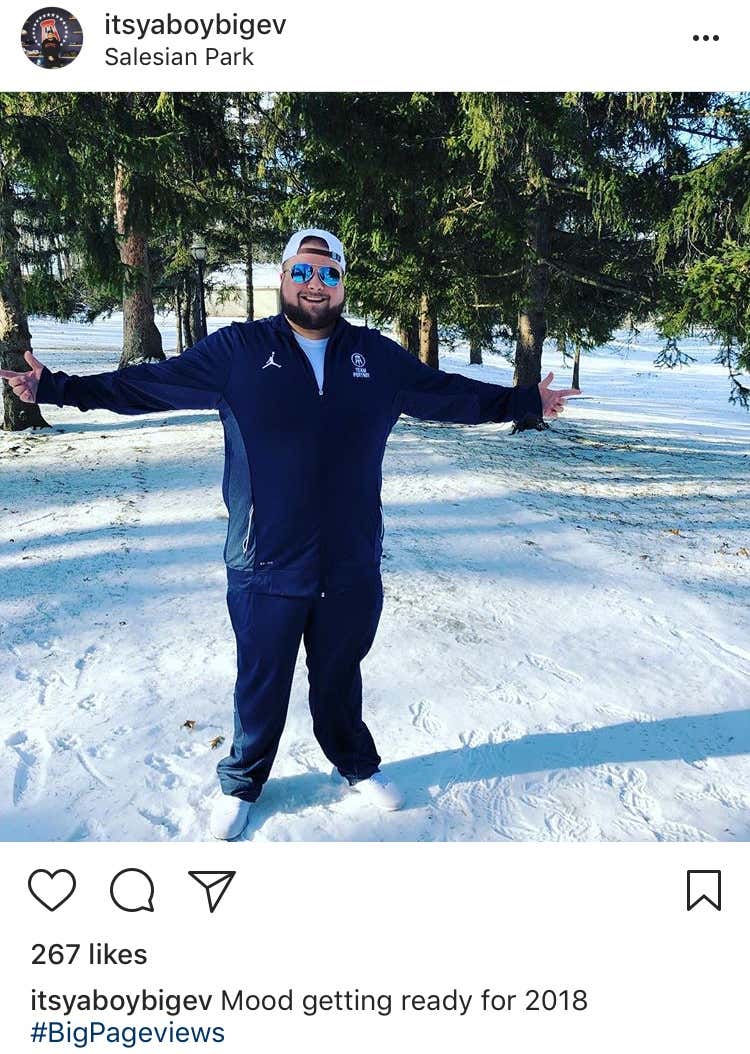 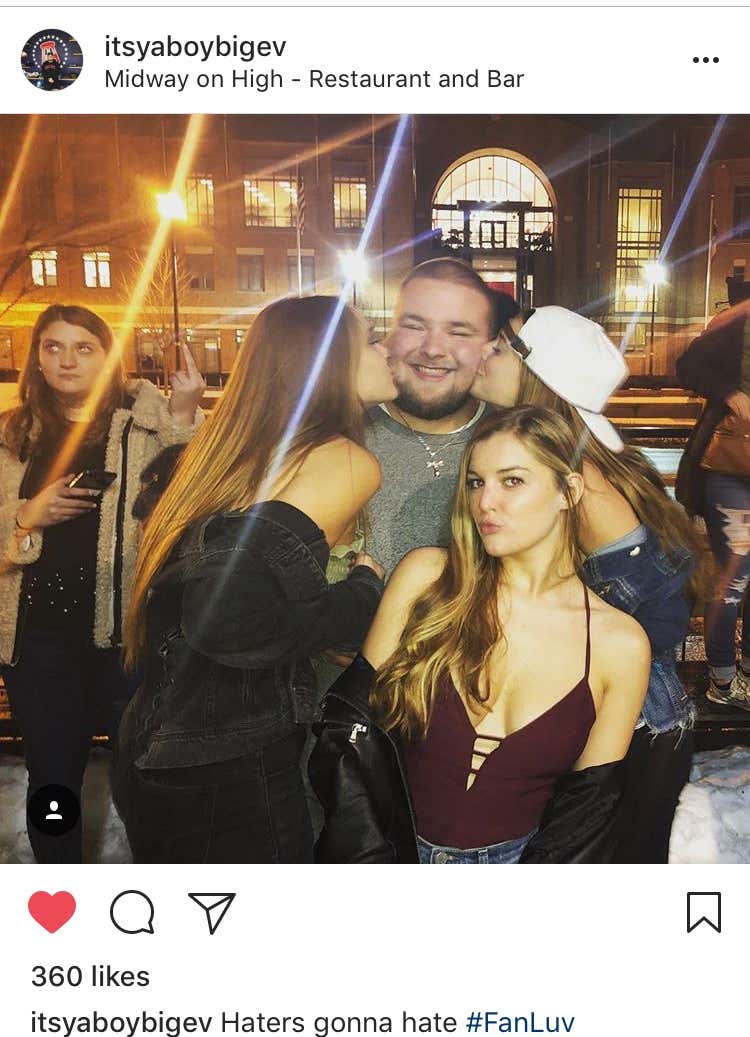 To Big Ev’s defense, the text was from a Boston number. Outside of that, nothing pointed to this being real. The non-iMessages to no phone call to Tex mentioning nothing to you should’ve been warning sign one, two, and three. Nonetheless, Big Ev bought a plane ticket from Columbus, Ohio and flew all the way to New York to have his heart broken into 350 pieces. After Big Ev had the news broken to him, he did only what a defeated man like himself could do: leave with bigger blue balls than Manti Te’o. To make things funnier, it seems the whole thing came from a man from the team up north. When Tex called the number that claimed to be Gaz, his voicemail message was this song:

Then the texts confirmed it: 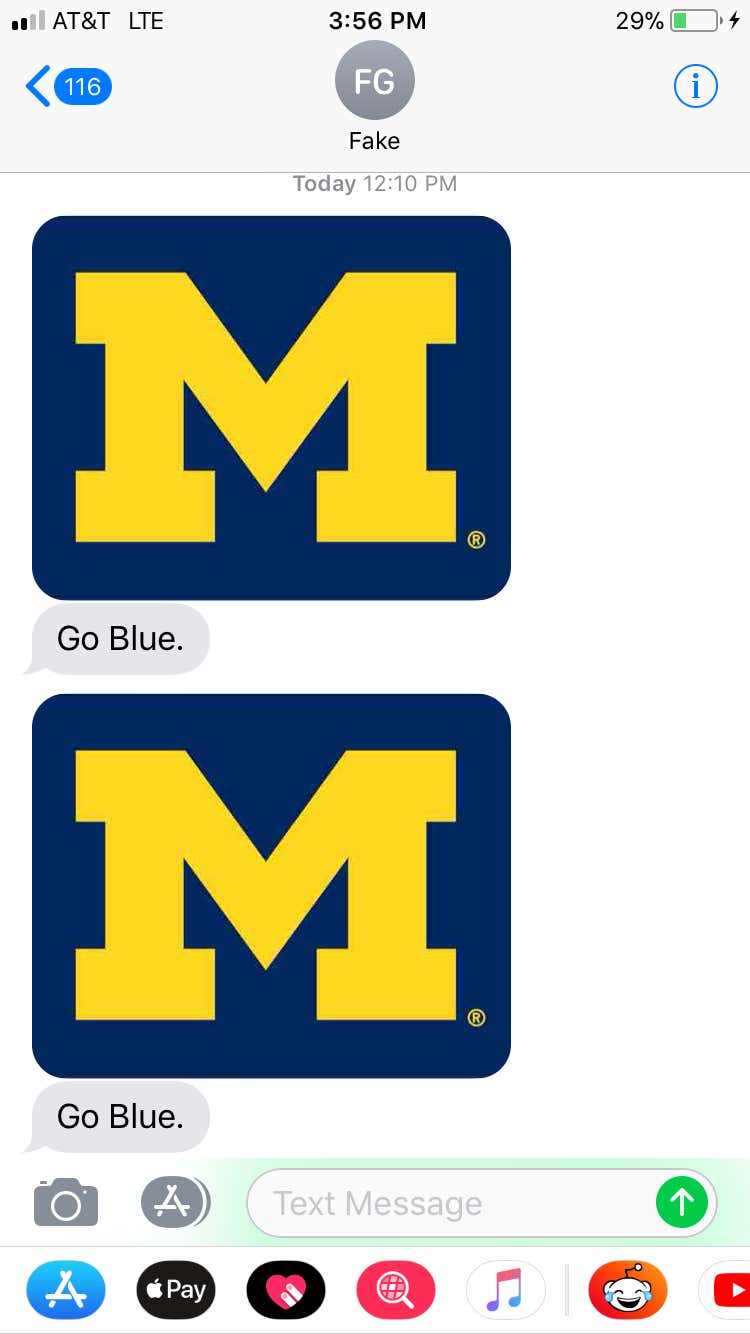 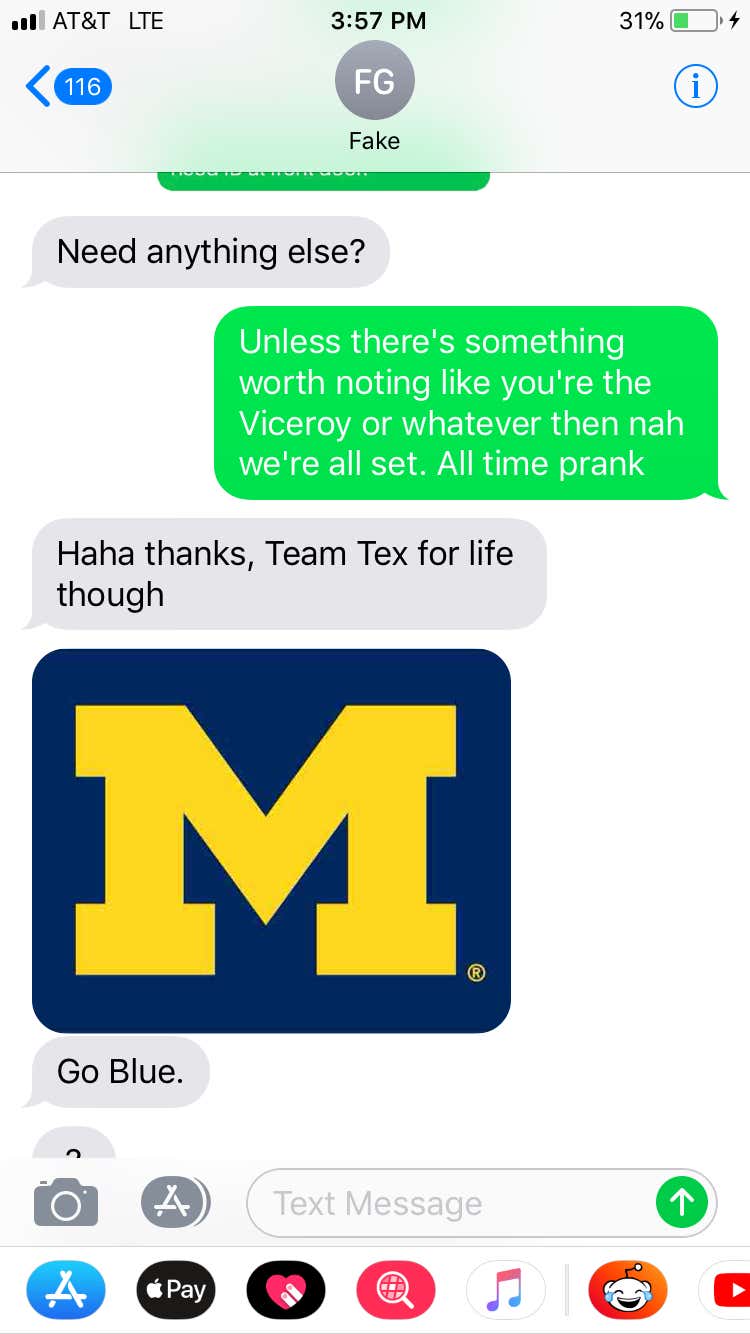 All-time prank. Hate has no off-season. Don’t forget that. Now the question is can Harbaugh claim this as a victory over Ohio State on his Michigan record?! He can take his wins against Michigan’s rival any way he can. Now for Big Ev….he seems to have taken it in stride:

Nothing like checking in on a dead man. In all sincerity, Big Ev works very hard and puts out content left and right for Barstool Ohio State. He has grown the account to over 20,000 followers. He took this better than 99% of the world would have. You’ve got to respect taking it on the chin like that. Repsect. Safe travels, Big Ev…safe travels. @JackMacCFB on Twitter

EL PRES UPDATE   Ok I heard about this story today.  We were going to talk about it on Barstool Radio today, but I told KFC I wanted to blog it tonight first.  Well JackMacCFB beat me to it and it was an unreal blog.  Better than I could have ever written since I don’t know any of the characters involved.  But I’m going to tell you this right now.  Big Ev may get the last laugh here because I loved everything about this kid except the fact he’s an Ohio State/NY Yankee dummy with a wildly overconfident outlook on himself and life.   But I don’t even care.  I mean if you’ll jump on a plane at a moment’s notice to get an interview here and you rant and rave about how Barstool is your dream job only to get your catfished by your arch enemy and then handle it the way he did the least I can do is give you a real interview.   So this prank may have inadvertently landed Big Ev his dream shot after all.   This may end up being a great life lesson after all.  When one door closes another one opens.  And it looks like he’s Team Portnoy too.  Hey Frankie schedule a real interview with this dude.