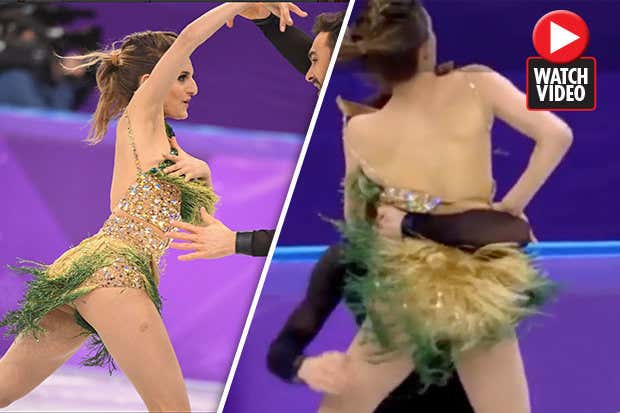 Daily Star – French duo Gabriella Papadakis and Guillaume Cizeron were competing in the short dance ice skating in Pyeongchang earlier this morning, when disaster struck. In the clip, you see 22-year-old Gabriella’s green dress snap at the neck during the early stages of their dance. But the two-time world champion did not let it faze her as she continued the routine regardless. In fact, she completed the act pretty well, considering her chest was left exposed for the majority of it. Speaking afterwards, she said: “It was pretty distracting.”My worst nightmare at the Olympics. I told myself ‘you have to keep going’. “That’s what we did, and we have to be proud of ourselves, delivering a great performance with that happening.” And fans were quick to jump on Twitter to commend her dedication to the sport. One tweet read: “Holy crap they just showed a close up of the French team’s wardrobe malfunction and full nipple exposure. Feel horrible for Gabriella.” And another added: “French ice dancer skates through costume malfunction with nip out for half of the routine. The confidence and poise… wow.”

The greatest athletes on the greatest stage persevere through all sorts of adversity. Jordan played through the flu in Game 6 of the Finals. Kirk Gibson hit a home run on 1 leg in game 1 of the ’88 World Series. And Gabriella Papadakis was figure skating with her titty out. Thats where the greats show their true resolve and rise to the occasion. Gabriella Papadakis knew the risks when she wore a tiny sequined dress for her routine. She knew the risk when she chose ice dancing, a sport where you more or less gotta fuck your partner on the ice. Every ice dancer has to worry about the ever-possible nip slip. They wake up in cold sweats thinking about failing to stick a landing, and failing to contain an areola. Yet the show must go on and she still finished in second despite the malfunction. NBC did her no favors with the slow mo replays, but hey, look on the bright side and think of it this way:

Nobody gives a fuck about ice dancing and now you have an extra few seconds of Olympic fame! Its 2018 a nipple aint a big deal no need to be embarrassed, you know? Its probably a positive at this point.

If I was an ice dancer I’d probably go Janet Jackson and pop that titty out on purpose. Have people talking about my routine for the next 15 years.

PS – I love the people talking about the poise and the confidence like she was out there skating after a death in the family or a tragedy or something. So her nipple was flappin in the wind a little bit. Big whoop.