NY Post — A medal-winning Russian curler is suspected of using illegal substances at the Pyeongchang Winter Games, in another blow to the country dealing with a drug-cheating scandal, according to a new report.

Sources at the games told Reuters bronze-medalist Alexander Krushelnitsky is suspected of testing positive for meldonium.

All of Mother Russia was embarrassed when the Olympic Committee banned anything even remotely resembling the colors of Russia from the Olympic Games for doping. Russian flag, Russian anthems, vodka.. all banned (I don’t know if vodka was banned but it should’ve been, just to be safe). Stalin turned over in his grave at the news. A deep, lingering black eye on the international athletic image of Russia.

Of course, not all of Russia’s athletes were banned. A few were OK’d, and they entered the games under a strong microscope. They entered with a spotlight upon their performances, their conduct, and – naturally – their drug tests.

And boom, a Russian curler fails a doping test. A curler. One who curls. What’s that old saying, if you’re not cheating you’re not Russian enough?

It’s so preposterous that many are suspecting sabotage.

I reached out to Barstool Sports’ curling expert, All Business Pete, for comment. 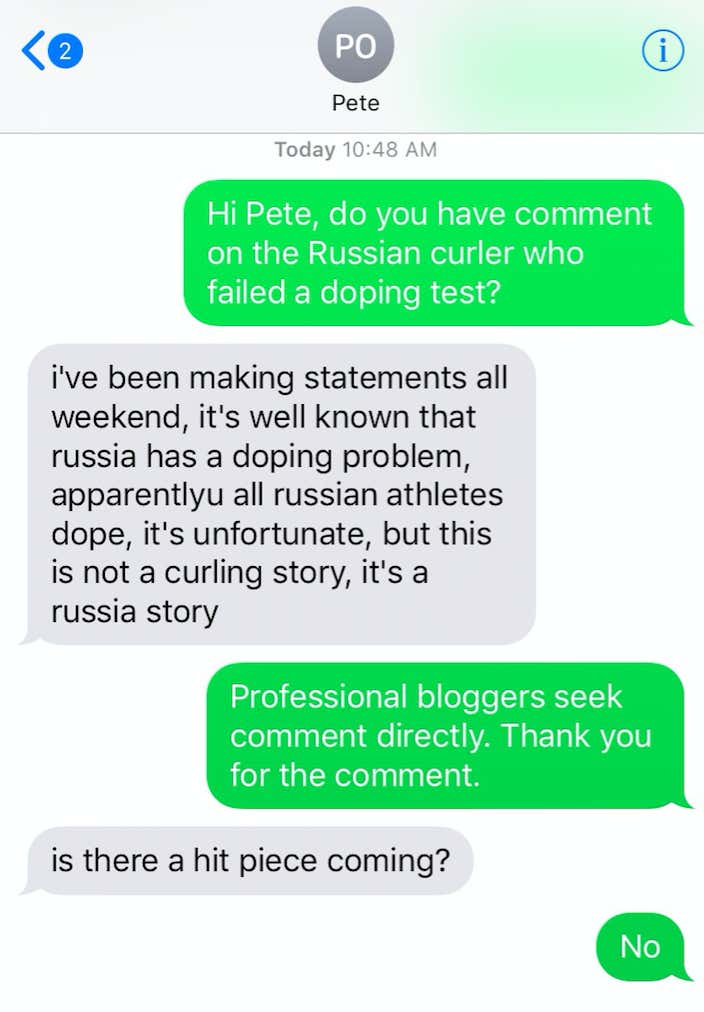 Pete, clearly, is accustomed and comfortable making coherent curling-related statements at this point.

I don’t know what happened, but if somebody sabotaged this Russian curler in an effort to embarrass Russia, well I’m all here for that. Just the spark the Olympics need to elevate the games from their current status to “alright I’ll go to the website every other day to see what’s going on.”