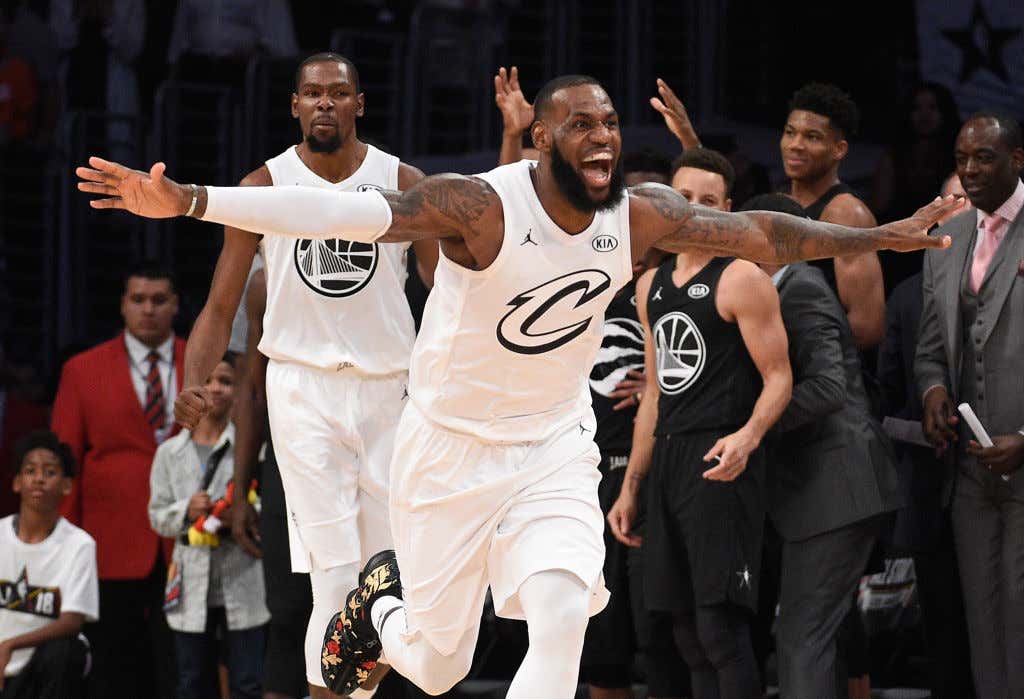 When the NBA changed up the format of the All Star Game, they did it in hopes that they game would be more competitive. Well, after a thrilling 148-145 game that was actually entertaining from start to finish, I’d say they got their wish. The players talked about how they were going to take this game more seriously, and you could tell right from the opening tip. Guys actually played defense! Maybe not playoff defense but definitely the type of defense you might see on a random night in February during the season. The point is they were trying, and while I do think the AS game should consist of crazy dunks and all that, it was also refreshing to see the best players on the planet actually, you know, play a basketball game rather than just go through the motions.

Heading into the game, based on the roster I went with Team Lebron, mostly because while I thought Team Curry had the shooting, the combination of talent/size would be too much to overcome. Well that’s exactly how it played out. Team Curry led for a majority of the game and was able to do so because of how they shot the ball behind the arc and by getting to the FT line. Not many teams can overcome a 22-6 FTA difference where a team also makes 17 threes, but Team Lebron was up for the challenge. They actually made more threes (19) and shot 51.7% from the field.

Aside from  the general highlights, I also want to focus on a couple guys that played really really well. It starts with Lebron and his MVP with 29/10/8, marking the third time he’s received the award

It was clear right around the 6 minute mark that Lebron clicked into another gear. His team was down something like 6 or 8 points and in a blink of an eye, they were tied. We all know the players try their hardest down the stretch of the game, and Lebron legit willed his team back by himself. Hate him all you want but watching him completely dominate a court that had the best players from the best league on the planet in Year 15 was something crazy.

But there were also a bunch of first time All Stars that played really well too. Like Joel Embiid for example. He looked unstoppable in his 20 minutes with 19/8 on 8-13, he even made a couple threes and down the stretch went right at Lebron in the post where he just used his size to shed all defenders like they were children. He’s going to be in quite a few more of these if I had to guess

If you’re a Timberwolves fan you are probably pretty happy with the way things went. Karl Anthony Towns looked great with a nice little 17/10 on 7-11 shooting in his 18 minutes, and you may be confused because you knew Jimmy Butler was an All Star, but he played exactly 0 seconds in this game. I’m going to say this was a good thing because his body 1000% needs the rest given how Thibs plays him, and also because he was 100% hung over as shit. That LA nightlife got him and you can’t convince me otherwise.

The only downside of this is Thibs is going to see KAT took 11 shots and decide that’s enough for him this month, and he’ll see Butler didn’t play a second and play him 48 minutes for 5 straight games because he’ll think he’s rested. Mark my words.

I also want to shout out some of the guard play from both sides. On Team Lebron there was Kyrie, who did Kyrie things and finished with 13/7/9 and just 1 TO

and along with Kyrie I was really impressed with the play of Dame Lillard. In fact, had Team Stephen won, he’d be my MVP. The guy was nails from deeeeeeeeeeep

It was fitting too that the game came down to a great defensive possession. Call me crazy but a late game winning play that Casey called for his own player in DeRozan seems like a bad idea. Maybe let Curry ya know, get the shot off. I’m not sure what you are supposed to do when you have Lebron and Durant draped all over you, that seems pretty terrifying.

Outside of then basketball, the halftime performance from N.E.R.D not only made me feel like I was back in 2005, but it was a performance that definitely made Jerry West and other old white guys uncomfortable

All in all I’d give this game a solid A- and the overall All Star weekend a B+. I honestly enjoyed it from start to finish and next year it should be even better because the NBA isn’t stupid enough to not give us the Draft live. In my dream scenario all the players are standing at mid court and they are picked right in front of everyone. Let’s give the people what they want, and that type of drama can’t be beat.