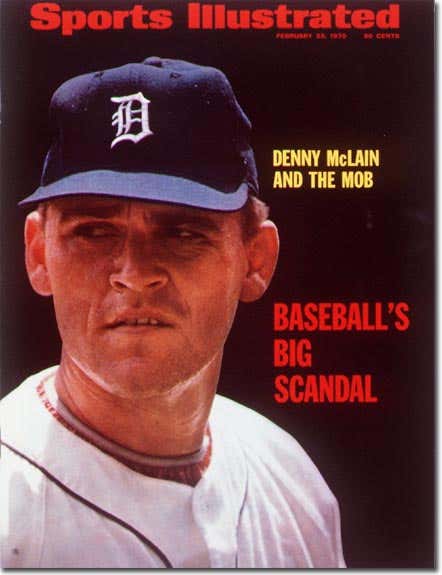 Two-time Cy Young Winner Denny McLain is suspended indefinitely by commissioner Bowie Kuhn for his connection to bookmaking and gamblers. The move comes after articles in Sports Illustrated and Penthouse linked the Detroit Tigers hurler to bookmaking activities in the off-season. McLain, would miss half the season and post a record of 3-5. The suspension would be the beginning of a rapid fall for Denny McLain who was out of baseball within three years.

Dennis McLain was born on March 29, 1944, in Markham, Illinois. Signed by the hometown Chicago White Sox out of high school, McLain threw No-Hitter in his professional debut, but was not protected the following spring and was claimed by the Detroit Tigers. Making his major league debut with the Tigers against the White Sox on September 21, 1963, Denny McLain earned the win allowing one run on seven hits and hit the only home run of his career. Splitting 1964 between AAA and the majors, Denny McLain made it up to stay in 1965 as he posted a 16-6 record. The following season saw McLain win 20 games and pitch in the All-Star Game for the first time in his career. In 1967, Denny McLain had a somewhat disappointing season, posting a record of 17-16 as a foot injury near the end of the season led to a poor finish and likely cost the Tigers a chance to win the pennant.

The 1968 season was known as the year of the pitcher throughout baseball, and Denny McLain was one of the reasons why. After losing the season opener, McLain went on a memorable run collecting wins at a rate that has not since been duplicated. While he often had a love-hate relationship with the fans of Detroit, McLain helped guide the Detroit Tigers to the American League Pennant, winning both the Cy Young and MVP awards, by posting a record of 31-6 with an ERA of 1.96 and 280 strikeouts. The 31 wins made McLain the first pitcher to top 30 wins in a season since Dizzy Dean of the St. Louis Cardinals in 1934. No pitcher has won 30 games since. The Tigers would win the World Series, but McLain’s season was not without controversy as he served up a home run pitch to his boyhood idol Mickey Mantle late in the season. It was Mantle’s penultimate home run in his major league career.

Denny McLain followed up his super season, by posting a 24-9 record with a 2.80 ERA in 1969. The 24 wins were best in the American League, as he split the Cy Young Award with Mike Cuellar of the Baltimore Orioles. At the age of 25, it appeared McLain was on the way to a Hall of Fame career holding a career record of 114-57. However, he would never again reach such heights as his career and life would begin to unravel with the start of the 1970 season.

As spring training was beginning, Denny McLain’s life away from the diamond went public in a pair of articles that appeared in Sports Illustrated and Penthouse. The articles alleged that McLain who had a passion for gambling worked for bookmakers in the off-season to help pay for his habit. It also revealed that the foot injury McLain suffered at the end of the 1967 season was carried out by an organized crime figure who stomped on his foot for not paying a lost bet. Commissioner Bowie Kuhn who had a no tolerance stance towards gambling, suspended Denny McLain indefinitely as the spring training began. McLain’s suspension would eventually end after three months, as was reinstated on July 1st.  However, when he came back, McLain was infective, posting a record of 3-5 with a 4.63 ERA, earning a second suspension after throwing water on Detroit reporters after a game. As that season was coming to an end, McLain got in more hot water when he was caught carrying a loaded gun on to a team flight.

After the tumultuous 1970 season, Denny McLain was traded to the Washington Senators in a multiple player deal. Even when he was at his best McLain often clashed with Tigers manager Mayo Smith, in Washington he would spend the entire season in a personal battle with Senators skipper Ted Williams. The hatred was mutual as Williams once called McLain the “Dumbest person he’d ever met”. The 1971 season was disastrous for McLain, as he posted a record of 10-22 with a 4.28 ERA. After the season McLain was traded again, this time to the Oakland Athletics. McLain made just five starts in Oakland, with a record of 1-2 with an ERA of 6.04, before he was traded to the Atlanta Braves for Orlando Cepeda. With the Braves, McLain posted a record of 3-5 with an ERA of 6.50. The following spring the Braves would release Denny McLain, ending his career with a record of 131-91. 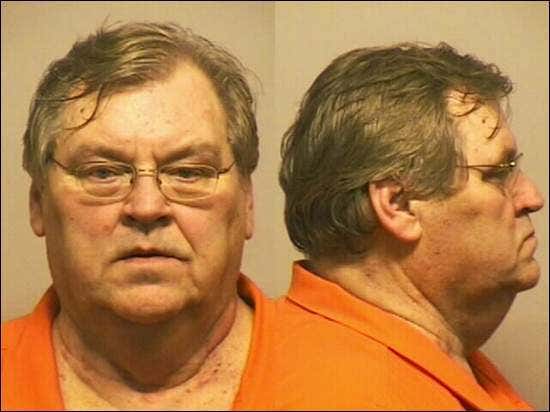 Denny McLain bounced around the minors in 1973 as his career ended with little fanfare. His life would continue to spiral out of control as he was later convicted of drug trafficking. It would be one of two prison stints for the troubled pitcher that once appeared ticketed for the Hall of Fame.