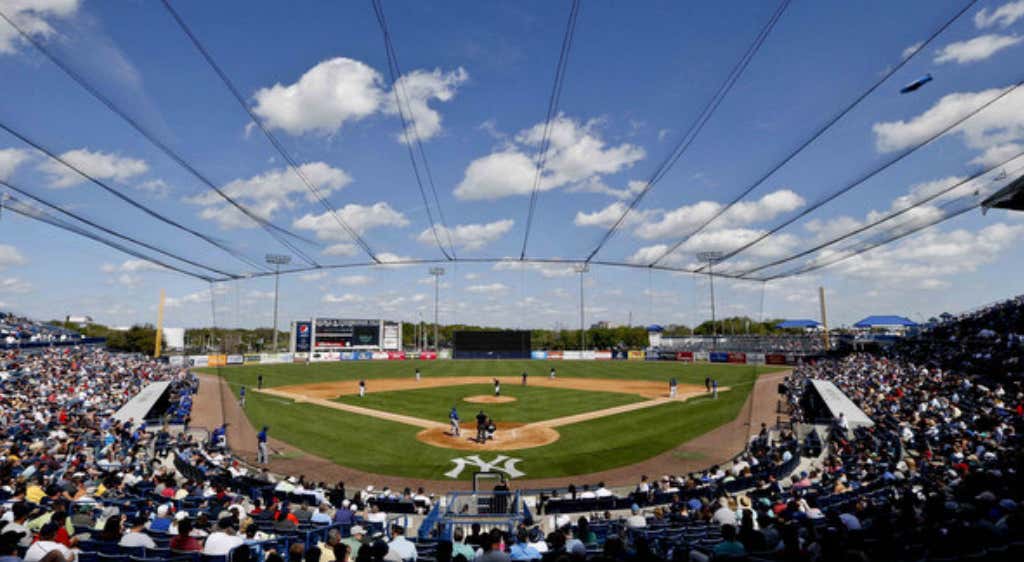 The date is February 19th. Every player on the 2018 New York Yankees has migrated to sunny Tampa, Florida where the Evil Empire begins their quest for World Series championship number 28. Today the entire Yankees squad will take the field for their first full-team workouts of the new year. For the first time in a few years, this feels like the New York Yankees everyone should hate. They enter the season World Series favorites, bolstering an offensive lineup that will scare even the best pitchers on the planet. They return the same exact bullpen that dominated last season, essentially ending baseball games in the 6th inning. The starting rotation returns the same as last year too, one that will certainly get better as the younger arms gain another year of experience while the vets keep on trucking. Adding insult to injury for the rest of the league, the young guns keep on rising from the minors. There’s reinforcements on the horizon in the shape of Gleyber Torres, Miguel Andujar, Chance Adams, Justus Sheffield, and plenty more. It’s fucking ridiculous. There are tons of Spring Training storylines to get into so let’s dive in…

I have a secret I’ve been wanting to share with you guys, but I’ve been a little insecure about it lately….

You promise not to tell anyone else?

Seriously, I don’t think Carrabis knows yet so I don’t want to hurt him this early in the season…..

Giancarlo Stanton is on the New York Yankees

I still won’t believe it until I see Judge and Stanton called onto the field in Toronto when the Yankees open the regular season. But for now I’ll take their word for it. We thought watching Judge bash balls all over major league stadiums was fun. How about when Stanton and Judge are doing it back to back and belly to belly? The trio of Judge, Stanton, and Gary will take over the sport of baseball this summer and we have a front row seat to all of the madness. This Spring the biggest thing to look at for Stanton and Judge will be how they handle left field. Aaron Boone will have to get a little creative to maximize playing all of his heavy hitters at once. With Gary behind the plate on a regular basis, Hicks in center, Judge in right and Gardner in left, that’ll leave Stanton to DH. This will be rotated in with Judge DH and Stanton in right no doubt about it, but what about when Gary goes to DH and there’s a lefty on the mound. Ideally you’ll want to sit Gardner in that case and move one of Judge and Stanton to left, a position they haven’t played in there professional careers. It’s not a crazy task to ask two extremely good fielders to learn a similar position, but it’s worth watching how they handle it leading up to the season.

Rookies in the Infield

Last year the names to watch were Judge and Greg Bird in terms of new guys on the scene. This year the focus shifts to second and third base. Gleyber Torres, my adorable Venezuelan superstar, is ready to take over for Starlin Castro at second base. He’s fully healthy after recovering from Tommy John surgery due to his freak injury on a slide last year. Without that injury, we would’ve already seen him in the majors last year no doubt about it. But the wait is finally over. It’s time to unleash Gleyber and if he mashes just like he did last Spring, Cashman and Boone will have no choice but to make him the Opening Day starter. I would personally Tyler Wade at second for the season’s first two weeks, keep Torres in AAA and get that extra year of service time like the Cubs did with Kris Bryant. Service time is not something the Yankees care heavily about usually, but with Gleyber I think they have a change of heart.

Over at the hot corner, Miguel Andujar appears to be the leader in the clubhouse to take over for the departing Chase Headley and Todd Frazier. We got the quickest of looks with Andujar last year when he was called up against the White Sox and went 3 for 4 with 4 RBIs. After that game he was sent back down and was not seen again until mid-September for three more at bats. The kid can absolutely rake, but his glove has been shaky at best in his time in the minors. Cashman did not go out and get another third baseman in the offseason (yet), so it appears that he’s our guy. Frazier and Headley were not great at all defensively last season while putting up underwhelming offensive numbers. If Andujar can stay up to par with their efforts last year with the glove he’ll blow them away with his bat and become a weapon at the bottom of this lineup. There’s lot of talk of Gleyber Torres and rightfully so. But Miguel Andujar is the bigger X factor in my opinion nobody is talking about.

Give Him a Goddamn Chance

So about Chance Adams? Will he just remain in AAA his whole life and put up great stats year in and year out? This has to be the year right? Whether it’s in a starting role or in relief Chance Adams needs to be on the major league roster. Prove to me he doesn’t belong at the highest level and then you can send him down. Don’t tell me he needs work on his third pitch and that’s what’s delaying him from a promotion. Let him come up and prove he belongs. I’ve always been a Chance Adams guy. I watched his origins video a few days ago and further fell in love with him. He just wants to help this team in any way possible. Give the man a chance.

I’m officially concerned with what the plan is for Chad Green. Why on Earth are we giving him a shot at becoming a starter this year? I’m hoping it’s just to give him his wish of a “shot”. But at the end of the day in Cashman’s mind, he’s going to be a reliever for this team. Chad Green was arguably a top 5 reliever last season. The movement he gets off his fastball when he comes in for just an inning or two is ridiculous. It just has a different feel to it than any other pitcher and there’s pretty much no reason for it. Last season Green’s spin rate was amongst the top of the charts amongst all pitchers. Chad Green was Girardi’s Weapon X as he could be inserted into any game situation 6th inning and on and shutdown opposing lineups. 69 innings pitched (nice) 103 strikeouts and just 17 walks with a sparkling 1.83 ERA. Green was not a bad starter by any means in 2016, but as a reliever he was All Star worthy. When you get that out of someone, you don’t fuck with it. We went through this with Joba Chamberlain years ago and I don’t want to go down that road again.

Let’s make things simple and keep Green in the pen.

Will Dellin Throw a Strike Ever Again?

Completely up in the air. He lost around ten pounds in the offseason and says he has gotten past last postseason’s demons, but can we trust him? When he’s on, he is one of the more unhittable pitchers in all of baseball. When he’s off, he looks like Rick Ankiel on the mound. October was a tipping point for me. I lost all the trust I had in the big fella and shifted that trust to Green, Kahnle, Robertson, Warren, and Chapman. If Dellin comes out shaky in the Spring there’s no way he can be gifted the 8th inning in 2018. He needs to earn it in the next month.

I’m looking at you, Greg Bird. Stay off your feet. The one thing that can derail this season is a major injury. I don’t need Didi Gregorius sitting out the first month. I don’t need Greg Bird having seven surgeries by August. Have fun in Tampa, but don’t kill yourself. Are we going to overreact to Stanton spring training homers? Absolutely. It’s going to be so much fun. But it’s also Spring Training. The things I listed above are important to monitor. But I couldn’t care less what Judge hits against these guys or what Severino’s ERA is in March. Greg Bird hit .451 last Spring with eight homers and 15 RBIs. Now I love Greg Bird don’t get me wrong. But I think a lot of us got carried away with that performance he put on in March. Just get back in your rhythm, shake off the rust of the offseason, and stay the fuck healthy.

Let’s have some fun

Every Friday me and Tom Scibelli aka Alarmingly Stupid aka The Voice of Fordham will be in your kitchen breaking down the week that just was with the Yankees and previewing the weekend ahead. DM any questions you wanted answered on the podcast and I hope we can give you the best show possible. We’re on iTunes right now along with Google Play with Spotify on it’s way in the coming days. First full episode coming to you this Friday. I can’t wait, the support so far from you guys has been AWESOME. We even passed that scum Rapaport in the podcast rankings for a little bit over the weekend. First Spring Training game is Friday. We made it boys and girls! The winter has ended.