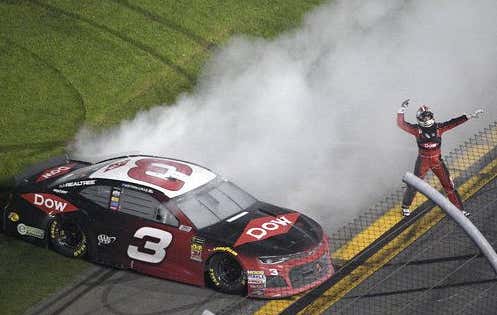 Source –  Austin Dillon put the No. 3 back in victory lane at Daytona International Speedway. Dillon won in the car number made famous by Dale Earnhardt, and he won 17 years to the day after the Hall of Fame driver was killed in a last-lap accident at NASCAR’s famed track.

“It was so awesome to take the 3 car back to victory lane,” Dillon said. “This is for Dale Earnhardt Sr. and all those Senior fans.”

Dillon even replicated the slide Earnhardt did in 1998 and did a burnout in the shape of a 3 in the infield grass.

Dillon is just the second driver to win the Daytona 500 after leading only the final lap, following Kurt Busch last year, according to ESPN Stats & Information.

What a weekend! The NBA All Star Game, Rappaport getting fired and of course, the Daytona 500. I know what you’re thinking, “Pat- this isn’t your brand! Shouldn’t you write about Gus Kenworthy and his boyfriend PDA-ing on-air?” Yes, I probably should, but after watching two-and-a-half hours of racing this weekend I feel compelled to write this blog. Mostly because of how much I actually enjoyed watching the race. Not only were there TWENTY-SEVEN total collisions, there were some pretty cool storylines. Austin Dillon won the race in the Dale Earnhardt number three car. Which hasn’t been done since Earnhardt himself won it twenty-years ago in 1998. I guess the number three car in racing is like number twenty-three in basketball. You can use it, but you better be fucking good. The victory came after a MASSIVE crash that occurred during the final two laps of the race.

After the race he paid homage in an emotional interview and by doing a number three burn out in the grass.

In addition to the Austin Dillion story there was the Danica Patrick situation.  Who before the race told reporters it would be her last run. Then this happened:

There were also tons of other smaller crashes that seemed to occur every few laps. I don’t want to say crashing is good for racing in the same way fighting is good for hockey, but it might be. They’re like intermissions in the sense that they break up the six-hour stretch of driving. I couldn’t take my eyes off the television. It was the trashiest I’ve felt since my mom bought me Fox Racing shirt in fifth grade. Not that there’s anything wrong with that.

The whole thing got me thinking, racing doesn’t get the love it deserves. Maybe it’s because they don’t have the personalities like say the NBA or NFL. Regardless, the actual event looks like a blast. Think about it, a hundred thousand people drinking beer and watching cars drive in a circle. What’s not to love? It’s a low pressure, high fun environment. You can get up and walk away for three hours and not miss a thing. If they had them in a more geographically convenient location I’d be at every race. The only downside would be getting your ear drums blown out for a half-a-day. But we do that with ear-pods anyways. At any rate, congratulations to Austin Dillon and all the other drivers who managed to survive the race. I’m looking forward to the next one.