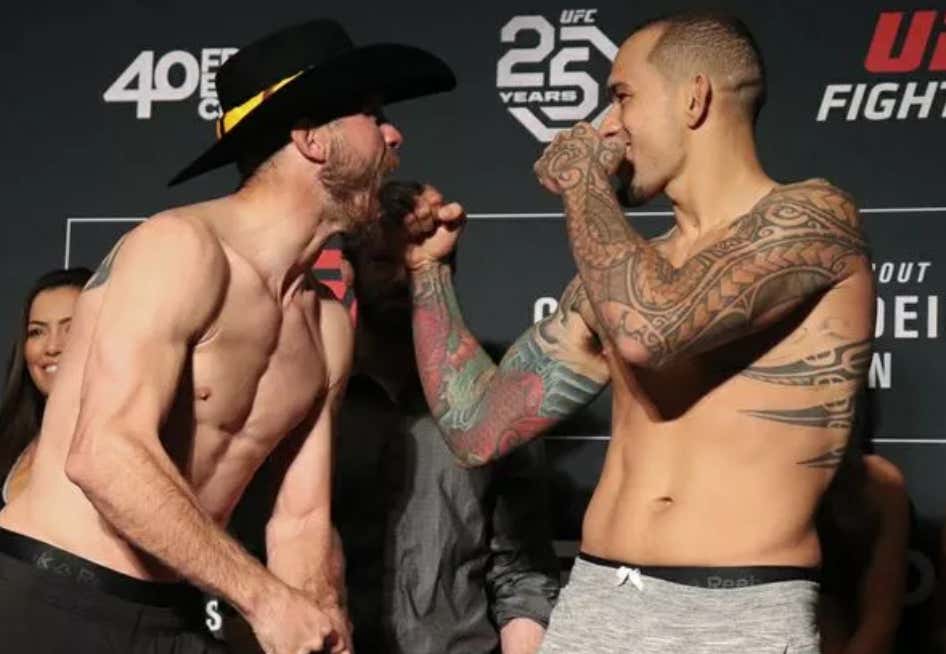 Real quick, elephant in the room, RAPAPORT’S FIRED LET’S GOOOOOOOOO! I’m sure we’ll all have more on that subject tomorrow. Let’s talk a little bit about fights now though, because tonight’s FREE card on FS1 (main card live at 9pm) is actually really great! I’m looking forward to this more than I was UFC 221, which, by the way, did an estimated 130,000 pay-per-view buys. Rough N Rowdy 2 headlined by Smitty vs Chef did 41,000 buys. We’re comin’ for dat ass Dana White. ANYWAY,,,

UFC Fight Night 126 is headlined by fan favorite Donald “Cowboy” Cerrone and noted lunatic Yancy Medeiros in a Welterweight bout, which shouldn’t last very long, but will be awesome while it does. Both guys have been in the UFC for a number of years and started at Lightweight, later moving to 170, making it a little surprising their paths have never crossed prior to tonight. Yancy has such a wild style that makes for chaotic fights every time he steps into the octagon, and has recent wins over Sean Spencer, Erick Silva, Alex Oliveira. He’s currently on a three fight win streak against those guys, and he didn’t let any of those fights go the distance. Cerrone is looking to bounce back from a three fight LOSING streak against Jorge Masvidal, Robbie Lawler, and Darren Till, and with 42 pro fights under his belt at 34 years of age, he better. It’ll be absolute mayhem from the opening moments up until somebody’s finished, and personally, I’m rooting for the Cowboy to ride another day. I think Yancy’s gonna leave himself open against the wrong guy tonight and Cerrone will remind him he’s not to be taken lightly.

Also on the card, we’re looking at some great matchups like Derrick “The Black Beast” Lewis vs Marcin Tybura (where I actually favor the underdog), the always exciting James Vick vs Francisco Trinaldo (I’ve got Vick), Thiago “Pitbull” Alves vs Curtis “Curtious” Millender (Millender’s my pick), and the return of Sage Northcutt (of course I’m taking Super Sage)! As always, I’ll be watching and tweeting along with the action, so please join in on the barbaric human cockfighting fun.