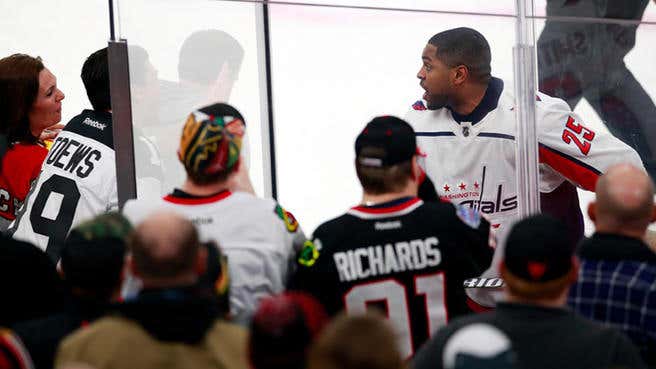 “Last night in Chicago, individuals directed racial taunts and abuse at Washington Capitals player Devante Smith-Pelly,” said NHL Commissioner Gary Bettman. “The National Hockey League condemns this unacceptable and reprehensible behavior. The League fully supports the actions taken by the United Center and the Blackhawks to eject the offenders and would expect the same response to any similarly unacceptable behavior at any of our arenas.

“While this incident was isolated in nature, no player, coach, official or fan should ever have to endure such abuse at one of our games. The League will take steps to have our clubs remind all stakeholders that they are entitled to enjoy a positive environment – free from unacceptable, inappropriate, disruptive, inconsiderate or unruly behaviors or actions and may not engage in conduct deemed detrimental to that experience.” 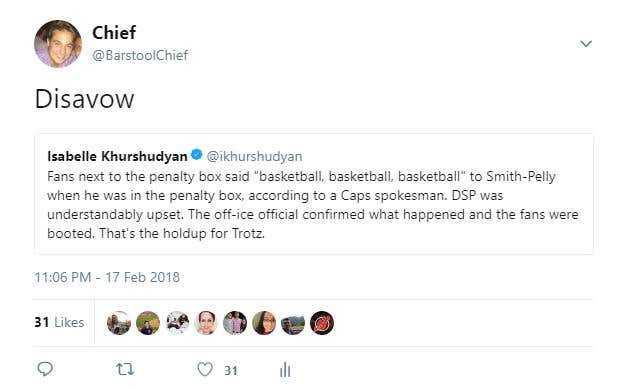 Why is it so hard for some people to be decent humans? The NHL and the Blackhawks hit the right tone with their responses last night. The Blackhawks acted swiftly to remove the assholes who were chanting “basketball” at Smith-Pelly and I hope they add a lifetime ban(even though its probably impossible to enforce) on these people. Like the NHL said, this type of taunt is completely unacceptable and reprehensible. It was also an isolated incident and not indicative of the entire fan base. Every fan base and every city, across the entire globe, has assholes. Ours assholes just had front row seats and showed themselves to the world. Its embarrassing, but I am proud of the way it was handled.

Full disclosure, my dad has had season tickets in Section 112 for about 10 years now. I am all for a little heckling, booing, and jeering of the opponents as they make their way to the penalty box. It’s one of the perks of sitting next to the opponent’s penalty box. Who doesn’t love a good boo? Feels great. There’s a line though, and these assholes were so far beyond the line that they needed a telescope to see it. Jeers should be directed at players based on the color of their uniform, not their skin. I wish that instead of security escorting that guy out of the stadium they simply could hit a button that removed the glass separating him from Smith-Pelly. It’s easy to have a big mouth when you’re protected by 9ft of plexiglass.

I think the overwhelming majority of people, maybe even 90%(I’m an optimist by nature) are against using language that is meant solely to degrade an individual. There’s no place for that. Hopefully this doesn’t happen again and people will think of both the immediate consequences(getting thrown out) and the grander consequences of what comes with demeaning another human.