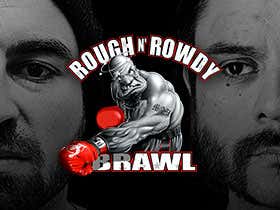 See, this is Nate’s deal. He’s slime. “Donovan McNate” maliciously slimed Eagles pageviews under the bullshit guise of “helping the company”. Spider Monkey Nate is again sliming in last second to steal referral clicks and try to benefit himself in someone else’s territory. Just like Donovan McNate, he’ll claim “Oh, I’m just helping the site! Why wouldn’t you want it promoted!”, when in reality he just wants the % of every click that goes to the person who posts the link to get the fight. Slimeball Nate could’ve helped GREATLY by being my manager, but doesn’t love this company enough to go through with what’s best for Barstool. Meanwhile I’m here literally taking punches to the face for the powers that be. Nate posted a blog last time at the midnight hour to be on the forefront on the homepage to get links when he did NOTHING to help promote the fight. He’s doing it again. Not here, Slime Monkey. Not now. Not tonight.

As for me, we all we got. We all we need. See you in the winner’s circle.