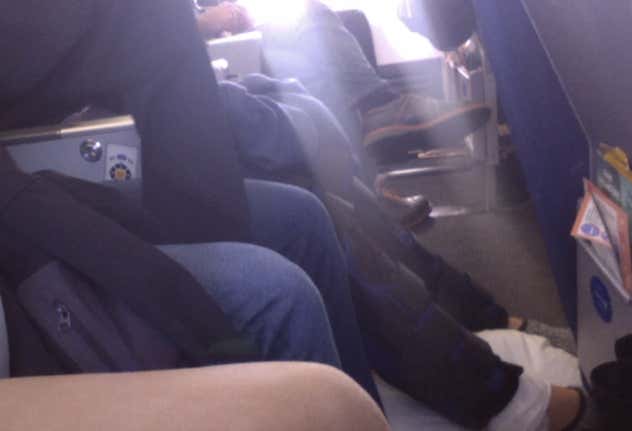 I’m on a flight right now. Just going to see my folks for the weekend. Had a slightly stressful week, what with a home invader and testifying in front of the grand jury. I figured some of momma’s chicken noodle soup would set me right. So about an hour ago, I boarded my flight and purchased an emergency exit seat because I had a middle seat in the back and I hate rubbing shoulders with peasants. As I approached my row, I noticed that the woman in the aisle seat of our row had two leg braces on. Upon indicating that I was in the window seat, she said, “oh you’ll have to climb over me. Both my legs are broken.”

Now, I don’t know if you guys have ever had the pleasure of sitting in the emergency exit row, but there is one defining rule that we exit-seaters have to abide by: you must be willing and able to assist in the event of the emergency. The flight attendants come by and ask every person individually if they are willing and able to assist, and every person has to say yes. I look forward to this quiz and say yes so eagerly that sometimes the flight attendant will reward me with a pair of wings to pin on my shirt pocket. It makes me feel like an honorary captain for the day, and it’s no less than I deserve given how clearly and enthusiastically I agree to assist in the event of an emergency. I’m the hero on the plane and people should know.

Now, truth be told, would I assist in the event of an emergency? Nope. If we go down, it’s every man, woman, and child for him/herself. I don’t spend 5 days a week doing overhead presses to help people out of burning airplanes; I do it because babes love shoulders. Of course, I’d probably help?one or two?children out of the sinking wreckage and onto the life raft. Once we’re adrift at sea, there’s no telling how long our food supplies will last, and I’ll need something to eat once we run out of canned peaches. I’ve heard that children are much easier to chew, and they’re typically more nutritious because they make for leaner steaks (I’m not going to eat the meat off the bone, I’m not an animal). Unless they’re kids from like, Alabama, in which case they’re super fatty. Sure, meat fat is flavorful, but the texture?makes me gag. And cutting around it is such a hassle without a steak knife. So, I’d make sure I only saved the middle-weight kids. Not too lean, not too fat. Delicious.

The point is… how the FUCK is a woman with two broken legs going to assist in the event of an emergency? How is she qualified to sit in the EER? The flight attendant asked her about her legs, and, I’m not kidding you, her response was: “they’re weight-bearing, but I can’t move them.” Ok, so that means that every single person trying to exit this plane during an emergency will have to climb over your lap. You’re trying to tell me that you can stand on your legs, but somehow, you can’t move them for me to get to my seat? What kind of backwards-ass, third-world rehab are you doing? Get some mobility first, then we’ll talk about walking! Hey lady, 3 minutes ago you told me I had to climb over your crippled shins because you couldn’t stand up. And all of a sudden,?you’re the one who will pull burning passengers from the plane and save lives? Fuck. That. Shit. You can’t have it both ways. You better order a fucking glass of milk when the drink cart comes around, you sawdust-shinned nincompoop.

And how about United’s flight attendant giving her the green light despite the fact that she announced that her legs are broken? I thought United ran a tight ship. You guys are famous for kneecapping Asian doctors who won’t give up their seats. But when some lady tells you her broken legs are “weight bearing,” you’ve done your job? Be consistent.

Speaking of breaking legs, I can’t wait for #RNR2 tonight. So much on the line!! Have a weekend folks!

PS- I know it’s a blurry picture but I had to take it with my computer while she wasn’t looking. You can still see the braces though. Sheeeesh.