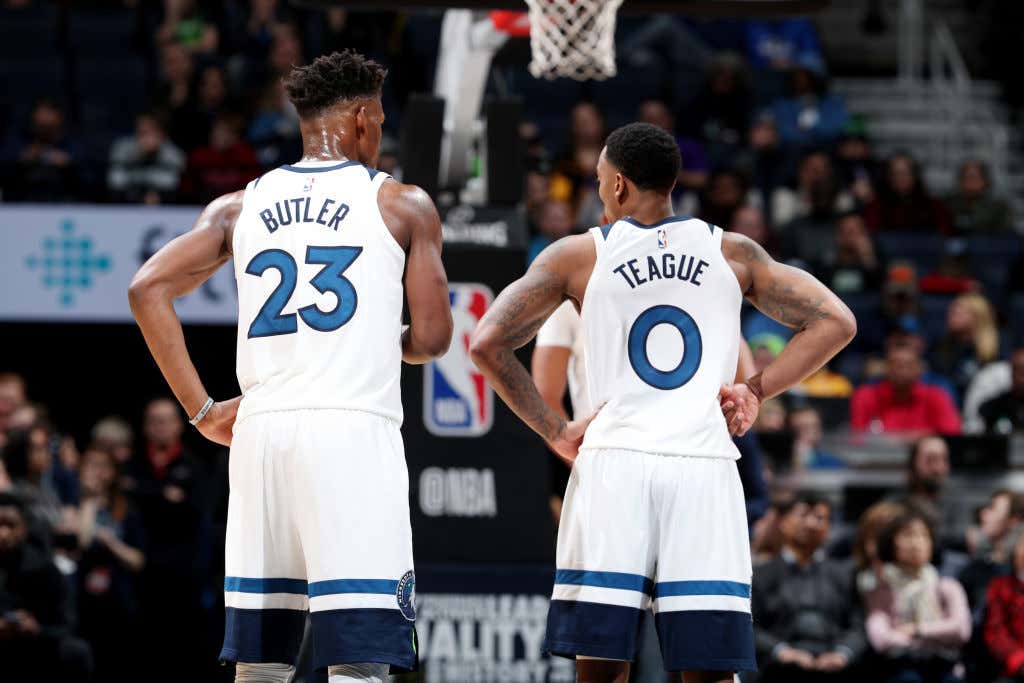 Happy Friday everybody and welcome to another edition of Last Night In The NBA where we catch you up on everything that went down last night in the Association. With the All Star break this weekend we had just 2 final games to get to until the NBA officially goes on break, so while I won’t be able to help you kill a lot of time on this Friday at work, it’s still better than nothing so don’t complain. I’m not sure what else you could have been doing other than watching these two games, but if you missed anything, here’s what happened

By now, you probably heard that Jokic notched the fasted triple double in NBA history with his 30/25/17 with 2 blocks on 11-14 shooting in his 34 minutes. He snagged it in just over 14 minutes which is pretty insane, and people forget Jokic is only 22. Twenty two!

I’ve been putting it in the blogs for weeks now, but I am all in on Denver. If your favorite team is done playing or has the night off and the Nuggets are one, do yourself a favor and watch them. They are fun as hell, can drop 130+ in regulation like it’s not problem whatsoever, and they don’t even have their All Star talent back from injury yet! So who else played well? How about Gary Harris going for 28 on 10-18 shooting

Not bad not bad. But then there was also Jamal Murray who went for 26/5 on 9-12 shooting

None of those games went into overtime and they consist of wins against OKC, GS, SA, and MIL. All teams that are supposed to be pretty good at defense, but like I’m saying when the Nuggets get hot they get HOT. As a result they enter the break in a pretty good spot in the West, currently in the 6 spot but just 0.5 behind OKC for 5 and just 2.5 games behind the 3 seed. They’ll be getting Millsap back at some point and it would not shock me to see this team pull off a first round upset. If they can somehow snag the 4 seed and get home court where they are 23-7 right now, I’m buying that even more.

It’s hard to win when you give up as many points as MIL did, but they did their best to keep pace mostly because Eric Bledsoe was also up to the scoring challenge. He finished with 27/8/5 on 9-14

and hell, even Tyler Zeller showed some life off the bench!

The Bucks who had been playing much better over their last 10 (7-3) are in an interesting position. Given the talent they have being a 6 seed and just 2.5 games out of being in the lottery doesn’t feel right. I suppose it may have something to do with their 0.0 point differential, but just like when every team it seems, a quick winning streak can have them as high as 4th in no time. I think they eventually pass IND/WSH, but in order to do that they have to start playing defense. This Nuggets score was the highest they’ve given up all season and the only team that’s come close is TOR, who has scored 131 and 129 against MIL but one of those took overtime.

And I don’t want to get too sappy, but after the Lakers pretty much dominated the first three quarters, I’m going to say Flip had something to do with the 35-20 finish in the fourth that helped secure the win after falling behind by 15 points. Pretty wild that MIN could score this many points when KAT and Wiggins combined for just 18 points, but thankfully others like Gibson, Butler, and Teague stepped up

This was an important win for MIN because with SA sliding this now ties them for that 3rd spot in the West. They’ve been 5-5 over their last 10 and pretty inconsistent as of late so the break is coming at the right time for them to regroup and come out firing in the second half.

It is a little wild that KAT had just 9 FGA, but that’s pretty normal at this point. Thibs continues to make no sense to me in that regard. Not like he’s your best young talent or anything. Before we move on the the Lakers I just want to say that I hope Jamal Crawford never retires and is getting buckets on people until he’s like 50. What a fucking beast

For LAL, good job good effort. Hard to win on the road in MIN where the TWolves are 24-7. Dropping 111 points int hat arena is nothing to hang your head about even if you came up short and blew a 15 point lead. That happens. There are some positives to take away, for example Julius Randle who they decided not to trade looked great with 23/9

and while Isaiah’s shot is still big time struggle city, he is starting to look more and more like himself as a playmaker

Young guys like Brandon Ingram are continuing to improve, he had 17/4/5 on 6-14 and remember Lonzo Ball isn’t even playing yet, he’ll be back after the break. For most teams I’d say all this winning they did a few weeks ago is actually hurting them, but considering they don’t own their first round pick (goes to PHI or BOS) I commend them for actually trying to win.

Bad news is they are 8 full games out of the playoff spot and have lost 3 in a row sooo the Lakers are in a weird spot. How unfortunate for them.

And that’s it! You’re now all caught up on everything that happened last night in the NBA. Despite the break there are still going to be games/events this weekend starting with the World vs USA game which happens tonight. As always I have you covered for everything that goes down this weekend so feel free to go live your life. I got you.