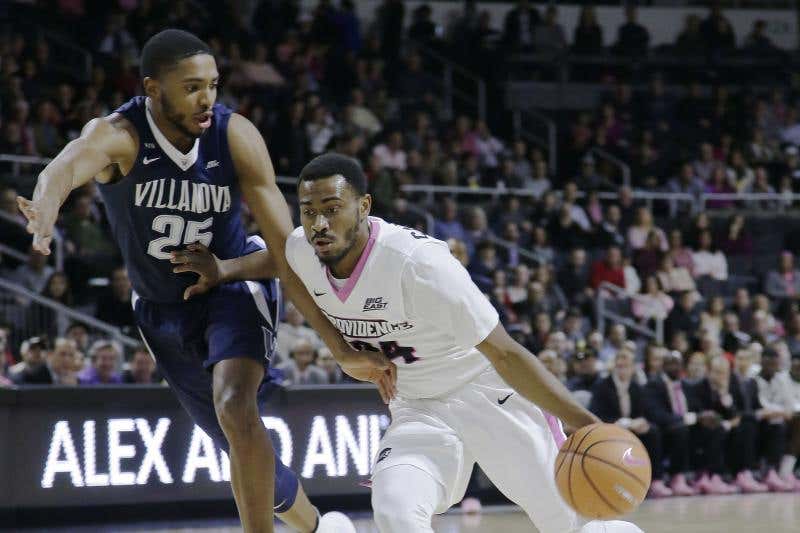 I mean they already showed their hand didn’t they? It’s good wins. It’s why Duke was a No. 2 seed and UNC a No. 3 seed on the top-16 reveal. The wins they had outweighed the losses to Boston College, St. John’s and Wofford. It’s the same reason Oklahoma was in the top-16. That’s not to say bad losses don’t matter, but they become easier to forget when you start getting good wins. As for Providence, they should be fine. They have 2 really good wins (granted both at home) over Nova and Xavier. While the committee does love road/neutral court wins, it’s hard to look past beating two No. 1 seeds, even with the home loss to DePaul and Minnesota.

I don’t think Penn State put out the blue print, it’s just one of those teams that matches up really well against Ohio State. We’re seeing that this year across the country. That’s part of what happens when there’s not a dominant team in the country. Certain teams are able to exploit good teams due to roster makeup, etc. Penn State happens to have one of the five best defenders in the country in Josh Reaves, which shows in games like this. One thing to remember too is Ohio State is wildly exceeding expectations. It’s not like they have this unreal roster that people were salivating over, so games like this can happen when a team has a defender like Reaves.

I don’t see it happening. I think people try to reach on how to get to the bubble while just looking at certain teams in a vacuum. It’s way too hard to say things like that without looking across the country. The only teams that you can talk about in a vacuum are Xavier, Virginia and Villanova because they are three No. 1 seeds. You know if they win, they stay where they are. As for the bubble, you have to remember bids will be stolen. There will be teams that get bumped to an at-large that many think would be conference tournament winners. As for Indiana, they are 15-12 and 8-7 in a pretty bad Big 10. They have 1.5 quality wins over Notre Dame (neutral) and home to Penn State. That doesn’t forgive the losses to Fort Wayne, Indiana State and Illinois. They are an NIT team unless they win out.

I mean, perhaps? The program right now is dependent on Chris Mack and his staff. Their ability to recruit and win consistently is what’s making this program at this level. The facilities are great. The fact the Big East has been a top-3 conference is great. A Final Four trip, just adds exposure, but Mack will continue to recruit the guys that fit his system. Perhaps he lands a top-20 guy or a McDonald’s All-American at some point, but that’s also not who Mack is going out and recruiting. He likes to recruit big, athletic guards. He likes to get wings that can shoot. It’s fair to say Xavier has been one of the 20 best programs in America over the last 15 years, so a trip to the Final Four just likely means the more casual fan starts agreeing with things like that.

I think you have to see if they can sweet UCLA and USC at home next week. Right now the Utes are 16-9 overall and 8-6 in a weak Pac-12. They do hold a nonconference win over Missouri (in Utah) and a win at Arizona State. Assuming they don’t lose to Washington State or Colorado and can sweep USC and UCLA (two bubble teams) that pushes them to 12-6 in the conference and a 20 win season. They’d still likely have to win a game in the Pac-12 Tournament, but they are then closer to the bubble. The nonconference didn’t do them a ton of favors nor does the Pac-12 being weak this year.

I’ve been out on Temple as a tournament team for a little bit now. They are 15-11 with losses to La Salle, George Washington, Tulane and Memphis, two of which happened at home. That doesn’t outweigh the wins over Clemson, Auburn and Wichita State. They are 7-7 in an American Athletic Conference that we’ve seen the committee have a lack of respect for. If they didn’t have those four just awful losses, then perhaps we’d be talking about them differently. Let’s not forget they close with one decent game, a home game against Houston. Even if they win out, 11-7 in the AAC with those losses don’t do it for me. Way better resumes across the country on the bubble.

I don’t think they can fall out of a tournament bid unless an epic collapse happens. They have enough quality wins, at Kentucky, Missouri and Texas A&M to go with vs Gonzaga to keep them alive. They’ll likely fall in that 6-10 seed line area, but there are three games coming up that can really push them one way or another. They go to Tennessee and host Auburn and Kentucky. Win those three or 2 of the 3 and you’re more a 6 seed. Lose those 3 and you’re more a 10 seed. Now if you lose those three and drop one to Alabama or Vanderbilt and you’re starting to sweat.

Yes, they can legitimately win a national championship. That defense is good enough to win one. However, HOWEVAH, they need Kyle Guy and Ty Jerome to snap out of this funk they are in. Since the Georgia Tech game on January 18th (last 9 games) Guy is shooting 30.5% from three and Jerome is shooting 28.9% from three. That can’t happen. Not with how much they can struggle offensively. What made Virginia so good to start the season is these two combined with Hall were shooting the ball extremely well and attacking offensively. That allowed for guys like Hunter and Wilkins to get easy buckets. With Virginia wanting to run Guy off a bunch of screens late in the shot clock to get him a look, you need to be shooting better than 30%. That’s the reason they won’t win the national title – not the tempo factor, which is still a thing, but it’s more the fact they are laboring offensively.

So factoring in everything from recruiting base, facilities, money, job security, history, etc. In no order I’m going: Kentucky, Kansas, UNC, Duke, Louisville, Texas, Michigan State, Ohio State, Arizona and Indiana with UCLA being the next one out.

So, I think you’ve seen me talk about this if you follow me on Twitter – but I’m on the committee to select the teams for the 3×3 at the Final Four this year. The teams will be made up of seniors who exhausted their eligibility since there money involved for the prize. Teams will be made up of 4 guys from the same conference to make 32 teams (one for each conference). As for the ultimate 3x3u team of four seniors I’d go: DeVonte Graham, Trevon Bluiett, Jock Landale and Grayson Allen.