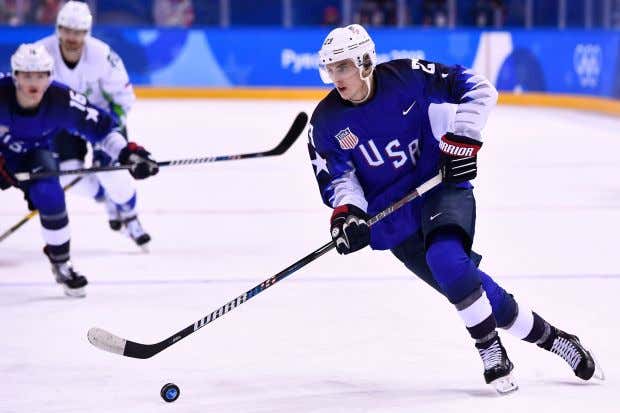 I gotta be honest. I totally thought this game was tomorrow morning. But here we are. Little late night puck drop for the Americans to get their shit together after a disappointing loss to Slovenia in overtime to open up the tournament. Luckily Slovakia was able to knock off OAR in regulation on Tuesday so Team USA is sitting in 3rd place in their group with 1 point. A win here today is going to be huge for them moving forward. Forget about Tuesday and let’s fuck up some Slovaks.

You can stream the game at home right here

Imagine this for a moment. You’re in college so life is still awesome. You get picked to play for the US hockey team at the Olympics so life is about as dope as it can get. Then imagine you’re Troy Terry and Ryan Donato. Couple of cawlidge hawkey boys playing for the US of A in South Korea and you boys link up to open the scoring against South Korea. You think they’re gonna be legends when they get back to school? Next question.

Unfortunately, this USA team is still not quite… well they’re not quite good. So less than 30 seconds after the Ryan Donato goal was scored, Slovakia scores to get this game tied up at 1.

Zapolski might want to have that one back but whaddaya gonna do? This team is a workout to watch. Still got faith in the boys though.

No matter who ends up winning this game, though, this ref deserves MVP of the game. Fucking gritty effort here from the zebra.

USA getting a decent amount of chances so far. Still struggling to find that scoring touch but they look like they’ve been controlling most of the period so far. Which–if I know anything about being a sports fan–means that they’re going to get scored on relatively soon here. But decent first half of the period of Freedom.

Few more chances for Team USA. Few more huge stops from Zapolski between the pipes. But nobody was able to score this period and we’re heading into the third tied 1-1. But if we learned one thing in the 2nd period, it’s that nobody wins if you try to hit Jordan Greenway.

20 minutes to go. Legs feed the wolf. Get after it here, boys.

Team USA catches a nice little break as the refs call an absolutely bruuuuuuutal Too Many Men penalty on the Slovaks. On the ensuing powerplay? It’s Ryan Donato again getting his 2nd geno of the night.

Beauty of a move down low from the Harvard kid. He’s gonna get so many girls offering him their dad for free legal counsel once he gets back to campus after this tournament. What a stud.

Quick Sidenote here: Nobody has to be enjoying this Olympic hockey tournament more than NHL refs. The stripes in South Korea have been pretty damn atrocious all around so far. No idea who these bozos are but they’re making the NHL refs look bizarrely competent.

Zapolski may have let in a weak one earlier on in the 1st period. But he’s been lights out ever since. Sure, it would be better to have a guy like Johnny Quick or Corey Schneider or John Gibson between the pipes here. But Zapolski looks dialed in enough to get the job done.

Let’s fucking goooooooooooooooo. Huge huge huge win for the boys right there. Getting that W in regulation gives USA 4 points in the tournament so far which has them in 1st place in the group. At least for the time being. Huge night for Harvard kid Ryan Donato. Had both goals for USA and looked extra silky with the puck on his stick all damn night. Now bring me those damn Olympic Athletes From Russia right the frig now. Miracle on Ice part deux.