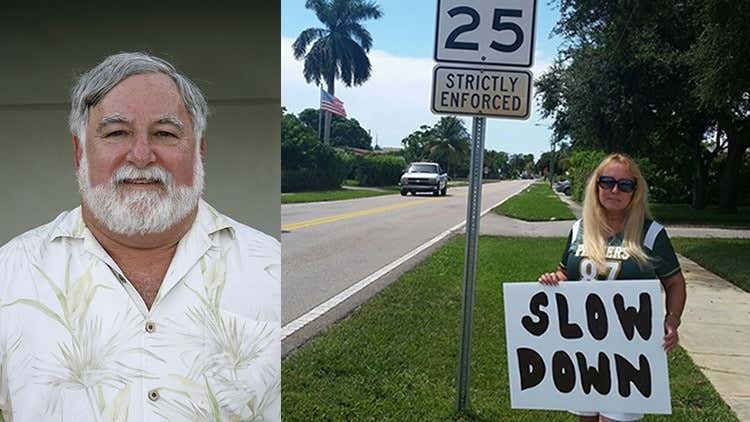 Palm Beach Post – A Lantana resident filed a complaint with the Florida Commission on Ethics in January claiming the town’s mayor said if she had sex with him he would make sure her neighborhood would receive speed bumps — a safety measure she had asked the town to install.

Catherine Padilla also said the mayor, David Stewart, about three years ago drove her to a motel one day after they had lunch and wanted to “occupy” a room with her, according to her Jan. 2 complaint. She later told The Palm Beach Post the mayor said he wanted to have sex with her in the room. She told him “no” and did not get out of the car. …

He said in all his years as mayor he has never asked for or accepted anything in exchange for a vote. …

Padilla said she didn’t feel strong enough to make a report until now. Her ex-husband, Herminio Padilla Jr., died in January 2015 while working at the East Central Regional sewage plant in West Palm Beach. Padilla, a plant worker, fell through a metal floor grating, plunged into sewage and was lodged in a 42-inch pipe.

Catherine Padilla and Stewart became friendly about five years ago from Kiwanis Club meetings, she said. She said the motel incident happened when she was working to get her neighborhood speed bumps around 2014 and 2015.

This seems to be your classic he said/she said right now. Mayor Stewart denies Padilla’s claims as his is right and I’m as big a “innocent until proven guilty” guy as you’re going to find. I’m all about #MeToo, but in the great Rock-Paper-Scissors game of justice, it doesn’t beat #PresumptionofInnocence.

On the other hand, Catherine Padilla is a widow who lost her husband on the job falling into a pipe of raw sewage. Stewart is a politician. Nothing will tip the scales like a woman whose husband died in literally the worst way imaginable over some middle aged man who holds public office.

I’m sorry Mr. Mayor, but there’s a natural bias in play here. It comes with the territory. Nothing makes me lose respect for someone faster than hearing them assign all these noble attributes to a politician. He cares about working families. She fights for equality. Blabbity blah blah. Like somehow because you run for office somehow you’re not motivated by the same things that human beings have been motivated by since we started walking upright. Greed. Lust. Power. Wealth. Prestige. Lust again. Guys want to be mayor precisely because it gives them the power to build speed bumps or not build them. And that power isn’t wielded with nothing in return. Whether that’s a cash bribe, getting out the vote in the neighborhood or “occupy”ing a motel room after the Kiwanis Club meeting. What else can we assume? That he’s super interested in the Padilla kids’ pedestrian safety? Right. And JFK got elected so he could go after the Mob and not bang interns in the White House pool. Sorry, Mayor Stewart. I’m with Catherine on this one.

P.S. I’m pretty sure this was the plot of a Modern Family episode. Although I don’t recall if David Cross asked Claire Dunphy to bang him in a hotel and I’m too lazy to look it up.