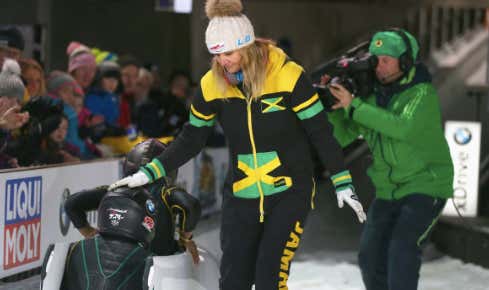 Source –   When Jamaica announced in January that it would be sending a women’s bobsled team to the 2018 Pyeongchang Olympics, it marked not only a historic moment for the Winter Games but a nostalgic one.

Just days before their South Korean debut, the women’s bobsledders have lost their coach.

Sandra Kiriasis, a former gold medalist for Germany, quit her post at the helm of the team’s staff this week after she says she was “forced out” by the Jamaican Bobsled Federation, as BBC reported. And she’s apparently threatening to keep the sled that was to be used by Jamaica in the 2018 Winter Games.

Kiriasis has also claimed legal ownership of the team’s sled, requesting compensation for its use despite statements by the Jamaican Bobsled Federation (JBF) to the contrary.

The determining factor for any teams’ success is cohesion. If one person decides to zig when everyone else zags it makes winning nearly impossible. Take the Cavs for example, a few weeks ago no one was on the same page and they sucked. Too many cooks in the kitchen. So, they cleaned house, got everyone on the same wave length and now things are running smoothly. The Jamaican Bobsled Team is trying to do the same thing. Except instead of cleaning house like the Cavs, they got rid of the one person who was (allegedly) fucking things up: Sandra Kiriasis.

Statement by the JFB:

“The lady was a hugely destructive force on the team. Now that she is off the team, synergy is much better, tension is down and athletes are now able to focus in a much healthier environment.

We have our high performance director, Jo Manning, and coach, Dudley Stokes, who have been with the team all season and who have been the ones driving performance, so, frankly, things have only improved with her departure.

If you come on the team, you have to be a team player. There are no gods and goddesses here.”

Sounds like a real bitch. If I were her I would’ve taken the high performance role and finished out the season but it sounds like that job was already taken. Given the situation, I have nothing but respect for the way she’s handled the situation. “You wanna fire me? Fine. But I’m keeping the sled.” Which is super embarrassing for the Jamaican bobsledders. I get that bobsleds are expensive but still, you’re on an Olympic team. You can’t be borrowing equipment from people. It’d almost be better to eat the season and start fresh just so this story doesn’t get out. Hopefully they can get the funds together to rent their sled back. Overall, it’s some bad PR for the team.