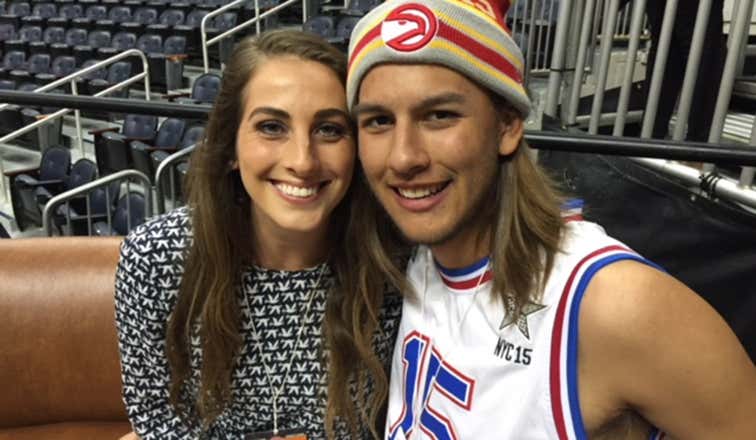 NBA.com- The Atlanta Hawks have announced that ‘Swipe Right Night’ couple Ben McCleskey and Avery Armstrong will say their vows and get married center court of Philips Arena on Saturday, March 3. Nearly two years ago, Hawks Chief Executive Officer, Steve Koonin offered to host and pay for the couple’s wedding should they ever decide to get married. The ceremony will take place on the hardwood at Philips Arena and will be followed by a reception for more than 200 guests in the arena’s newly-opened, exclusive Courtside Club.

In 2015, McCleskey and Armstrong, both Shorter University students at the time, began their relationship at the Atlanta Hawks’ first ever ‘Swipe Right Night’-themed game where fans had the opportunity to meet up with matches from the popular Tinder app in real time. In 2016, the couple returned to Philips Arena as guests of the team for ‘Swipe Right Night 2.0’. It was then the offer of Philips Arena was extended as the future wedding location for the pair. After several Hawks games, two years of dating and a newborn baby, the couple took the team up on its proposition. David’s Bridal has partnered with the Hawks to provide the soon-to-be bride with dresses for the wedding day.

Following the ceremony, the couple will treat their guests to an early evening reception in the arena’s exclusive Courtside Club for a night of dining and dancing. Located just behind the basket, the club recently opened as part of the first phase of the arena’s $192.5MM transformation project. The space is the most exclusive club in the arena, usually reserved for floor seat ticket holders and features the signature Hawk Bar, the only on-the-floor bar in the NBA.

Look at the Atlanta Hawks continue to stack Ws as a franchise while their team continues to stack Ls. Not only can you find someone to hook up with at a Hawks game, but you may just find the love of your life while Hot Sauce breaks ankles during game breaks and Gucci Mane sits courtside.

Now I’m sure some people will say that it’s weird or lame getting married at an NBA arena. But those are people that have never paid for a wedding in their lives. My favorite game to play is when I tell my wife all the shit we could have bought with the money we blew on our wedding which results in both of us crying and wondering what the fuck we were thinking. Yeah it’s the greatest party you will ever have for yourself. My entire wedding day was in fast forward because every time I turned around, another close friend, family member, or long-time family friend was congratulating me as we celebrated and drank top shelf booze. But once everyone is awkwardly shuffling into breakfast the next day with a hangover and sore feet, that night is just a memory and a bunch of credit card payments for the happy couple.

But if the Atlanta Hawks are just gonna give away weddings for the cheap price of absolutely nothing, I would sign up for that shit right now. ESPECIALLY since these two already have a kid. Life isn’t real from the time you start making real money until the time you have a kid. But once that kid is born, money is more a thing in theory than something you can actually touch. To pay for the food, the open bar, AND the dress is too good to pass up.

There are a few caveats to this, however. One, I need real food at this wedding. No chicken fingers and french fries unless we are talking about cocktail hour. Steak, chicken, fish, and vegetarian (read: pasta). Two, pigs in a blanket are a must. If Philips Arena doesn’t have the greatest wedding app ever created, they don’t get to pay for my wedding. You can choose the cheeses, the fruit, alcohol, and the butlered hors d’oeuvres. But pigs in a blanket is as much a must to the wedding as the bride is. And three, Hot Sauce needs to be at the reception. Fuck a guest book or a photo booth. Every guest that is at my wedding has to attempt to guard Hot Sauce while being videotaped. I don’t care if you are the Father of the Bride or the groom’s great great nana in a wheelchair. Everyone has to enter Hot Sauce’s House of Horrors and if that video is deemed a Must Watch, it’s going on the Hawks Twitter account.

P.S. I can’t lie, I respect the groom’s wedding gift list. Asking for a full Playboy magazine of your wife and burying it at number 4 is savvy as fuck.

Regardless of if this guy gets a magazine full of nudes or not, you know his wife is going to be beaming just because he asked. And as we all know, the first rule of marriage is happy wife, happy life.

P.P.S. Even though I love everything about this idea and would do almost anything to not pay for a wedding, if the Knicks offered this deal to me, I would kindly decline and also ask whoever the event planner was that reached out to hiss at James Dolan for me. A man’s got to have a code.