By now, everyone knows the story of Genie Bouchard and mystery man John, her Super Bowl date. They’ve been intertwined in a weird “are they or aren’t they” public relationship for the last couple of years. People have been wondering- are they together? Do they hook up? Is he ultimate friend-zoned? Is it all a publicity stunt for her? Is he in on it? Does he just accept the friend-zone and just go with it because of all the perks like going to the Super Bowl for free? Is it a combo of a bunch of them? So many possibilities.

My final theory on them is they have in fact hooked up, but aren’t in a relationship. Just two good looking people, no strings attached, they do what they do when they see each other every few months, but it’s not serious.

And my theory was more or less confirmed today when she posted the above Instagram with the caption: 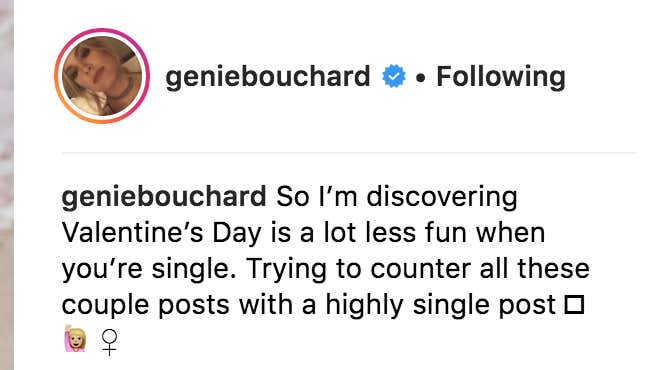 Were they ever a couple and now they aren’t? Is it still a casual thing? Is this post announcing she is no longer connected in any way to John? And where does John go from here? Just back to being a normal dude, or is he already on to his next smoke athlete? So many questions.

Regardless, it’s abundantly clear Genie wanted EVERYONE to know she is single and ready to mingle. She isn’t posting that without reason. So I’d venture to say whatever was happening with John is officially over, done, and finished with.