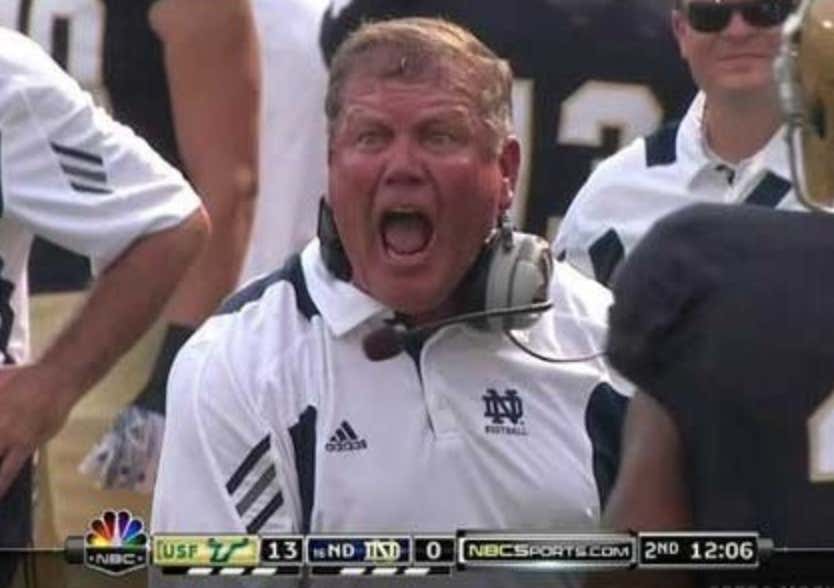 Back in 2016, the NCAA’s committee on infractions ruled on Notre Dame’s self-reported academic infraction from the 2012 and 2013 season: we are taking away the 21-combined wins you had over those two seasons. Poof, they are gone! I know you saw them happen with your own eyes and there are videos of the games happening, but in our corrupt, make no sense world you are now 0-5 over the 26 games you played in those two seasons!

ESPN-The NCAA has denied Notre Dame‘s appeal of a decision to vacate 21 football victories because of academic misconduct, including all 12 wins from the school’s 2012 national championship game run.

The academic misconduct, which was self-reported by Notre Dame, was:

NCAA.org-In the NCAA Division I Committee on Infractions’ decision, the panel found a former Notre Dame athletic training student violated NCAA ethical conduct rules when she committed academic misconduct for two football student-athletes and provided six other football student-athletes with impermissible academic extra benefits. The panel prescribed the vacation of records, along with a probation period and a show-cause order for the former athletic training student.

Your guess is as good as mine on why it took 2 years for the NCAA to rule on Notre Dame’s appeal.

The decision makes little to zero sense when you consider the consistency to which the NCAA has ruled on similar cases in the past. As you’ll see with their ridiculous commercials, the NCAA loves jerking themselves off when it comes to “academic integrity.” It’s one of their main arguments when it comes to keeping “amateurism alive” and not allowing players to make money off of their name. I will not pretend to know a lot about “academic integrity,” but taking away 21-wins from a school who self-reported a minor infraction but letting North Carolina, who has allowed their athletes to take fake classes for decades, get off free makes about as much sense as praising a dictators sister for giving the Vice President of the United States the “side eye.”

Notre Dame’s president wrote a letter tearing apart the NCAA for their decision on the wins being vacated:

There is no precedent in previous NCAA cases for the decision to add a discretionary penalty of vacation of team records in a case of student-to-student cheating involving a part-time student worker who had no role in academic advising.

“There is no precedent” in a professional letter like this is the old white guy way of saying, “ya’ll got no idea what the fuck you are doing over there, huh?” ND’s president even went on to subtly mention North Carolina’s case:

Notre Dame’s case stands in striking contrast with another recent high-profile academic misconduct case in which the NCAA Committee on Infractions chair explained that even though certain classes “more likely than not” were used to keep athletes eligible with fraudulent credits, the legitimacy of those classes was beyond the jurisdiction of the NCAA’s enforcement process precisely because that question must be left to the determination of the university in the exercise of its academic autonomy. The notion that a university’s exercise of academic autonomy can under NCAA rules lead to exoneration—or to a severe penalty—without regard to the way in which it is used defies logic and any notion of fundamental fairness.

Yeah, so this guy pretty much went as scorch earthed on the NCAA as an old, white dude who is the president of Notre Dame could.

Why does Notre Dame care? Well, just like everything in Notre Dame’s world, they care about this because of tradition and being better than Michigan.

SB Nation-A win by the Irish on Sept. 1 would have bumped their percentage up to .7296 and Michigan’s down to .7286. Not anymore. By nixing 21 wins between the 2012 and 2013 seasons, the decision drops ND to 885 wins all-time, and a .7123 all-time win percentage. That’s also behind Ohio State, Boise State, Oklahoma and Alabama, for sixth all-time among FBS programs.

It’s, also a reminder to Notre Dame that the 2012 season happened, which means they have to think about two things. One, Manti Te’o: 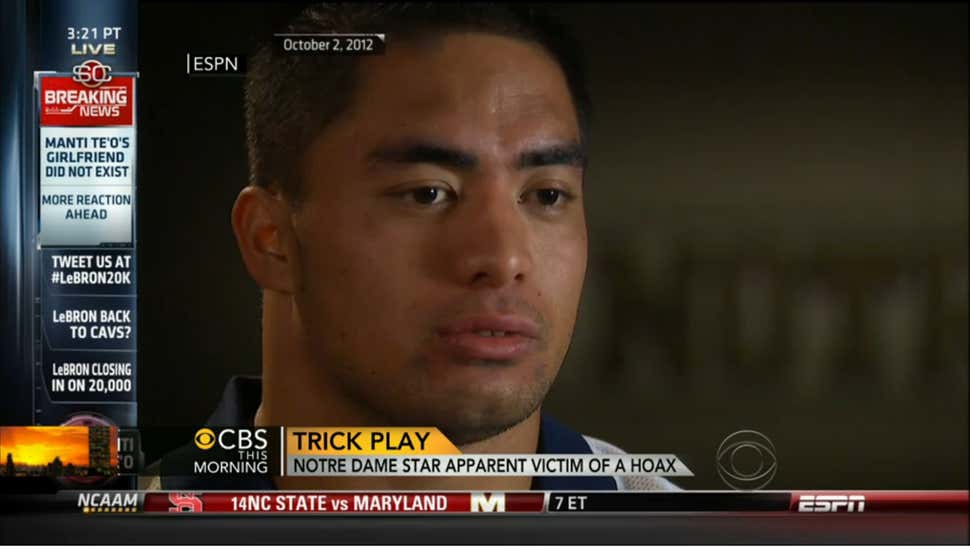 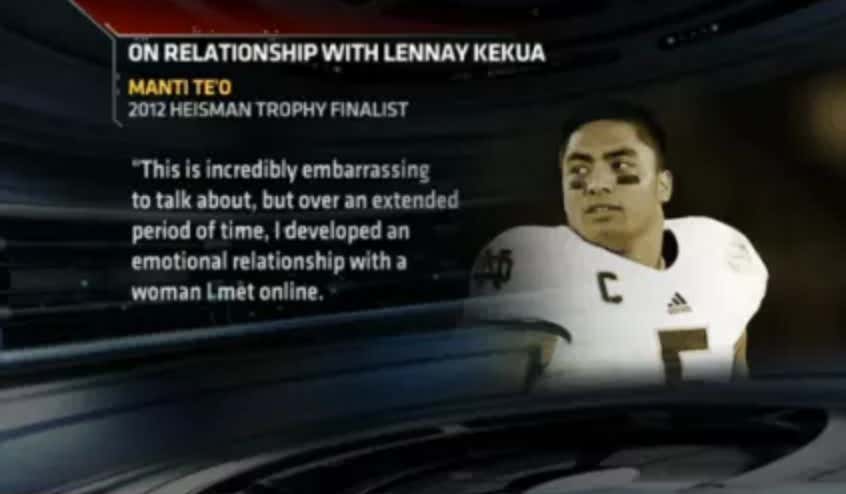 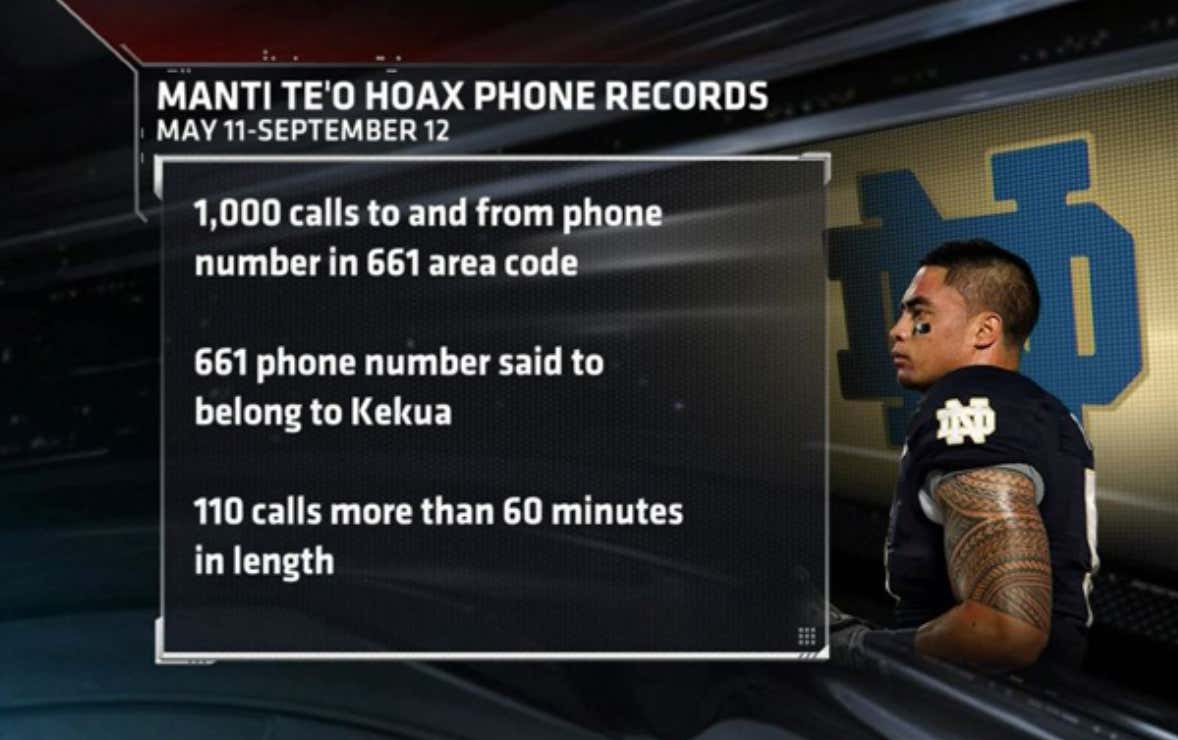 The second reminder is of the one game on Notre Dame’s 0-1 record in the 2012 NCAA record books:

The only game that Notre Dame played in during the 2012 season, according to the NCAA, was this one. Calling this a game is an insult to every game ever played. This was a murdering. It looked like Notre Dame was a JV team. Hell, the game is remembered more for Uncle Brett noticing Katherine Webb than anything else: