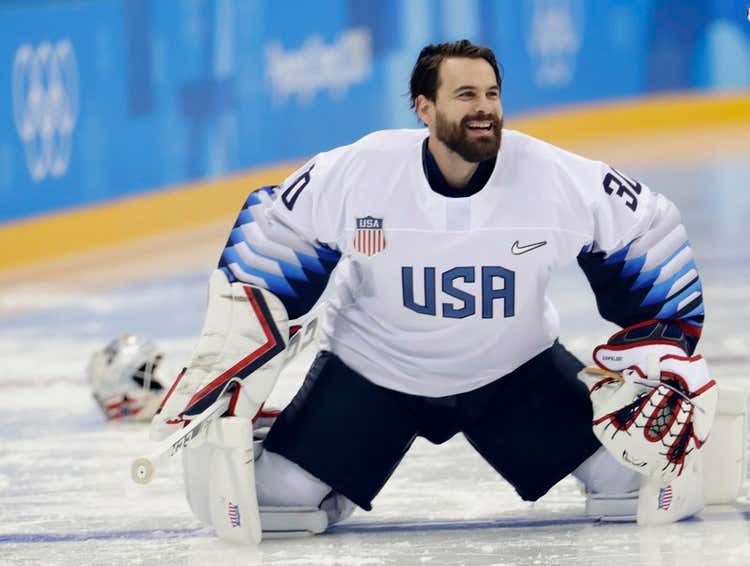 Great moments are born from great opportunity. That’s what Team USA has here tonight, boys. That’s what Team USA has earned here tonight. These aren’t necessarily the greatest hockey players that the United States has to offer. Don’t get me wrong, they’re all still really fucking good. But they’re not Auston Matthews or Jack Eichel or Patrick Kane or Phil Kessel or Jonathan Quick. I think we all know that. But these are the guys we are riding with. And these are the boys who are about to put the nation on their back and put on a show on the world’s largest stage.

At this point, everybody is already counting this team out. Everybody is already looking ahead to Canada playing against the Olympic Athletes from Russia in the gold medal game. Everybody is already looking ahead to some variation of Sweden, Finland and the Czech Republic playing for bronze. Nobody is giving this team a chance. But America was built on an underdog story. Did anybody give little ol’ America a chance against the big bad Brits in the Revolutionary War? Heck no. But what they lacked in overall elite talent, they more than made up for in heart and grit. So today starts our own Revolutionary War. USA Hockey vs the World. And Slovenia is about to get a taste of it first. Might as well let that line jump to 5.5 with how much juice Team USA is going to come out with.

Puck drops at 7:10am here on the east coast. You can catch the game on NBCSN. You can also check in here for some streaming options if cable isn’t your thing. I’m going to keep the live blog updated as much as I can. Only issue is NBC is being super strict with broadcasting rights so we can’t just rip GIFs from the game unless we want to get slapped with a C&D. So I just gotta wait for the “official” highlights to drop on Twitter and then I’ll drop them all off in here.

Let’s fucking get it, boys. Time to get blackout drunk at 7 in the morning off some good ol’ fashion Patriotism.

Still 0-0 a little more than halfway through the 1st period but the Americans have defenseman Noah Welch to thank for that. What a ridiculous play going full Charlie Conway on the save here.

The Real Deal Brian O’Neill lights the lamp and gets Team USA on the board for the first time this tournament. He’s a Philly guy so obviously riding the wave from the Eagles Super Bowl victory. Everything coming up Philly these days. 1-0 Team Freedom.

This is just some hard dick hockey from the Americans. Beauty of a feed from Garret Roe, O’Neill crashes the net with some jam and it’s in the back of the net. Fucking love it. And what I love even more? Russia has already given up a 2-goal lead against Slovakia in the other game this morning.

I’ve been saying it since the roster was first announced. Jordan Greenway is going to have a massive tournament. He was a stud for Team USA in the World Juniors last year. He’s an absolute force on the ice and especially so in front of the net. He’s centering USA’s top line at the mother fucking Olympics as a college kid. And here he is giving Team USA the 2-0 lead in the 2nd period.

Aside from this Jordan Greenway goal, there wasn’t too much going on that period. The Troy Terry/Ryan Donato line is going to be so much fun to watch this tournament. They’re flying around the ice and making shit happen every shift, even if it doesn’t end up on the scoresheet. As far as scoring goes… Team USA is getting plenty of chances. Obviously it’s tough to be automatic in the 1st game of the tournament but as long as just a couple of guys are able to find themselves in a groove over these next couple of games, they should be able to put up numbers.

No chance Team USA loses after this…

Well shit… maybe I spoke just a little too soon. Slovenia came out buzzing in the 3rd and they cut the Team USA lead in half with this goal from Blaz Gregorc just under 6 minutes into the period.

And then… with the Slovenian goaltender pulled and less than 2 minutes left to play….

The Barstool Flag has cursed USA Hockey. Give up a 2-goal lead in the 3rd period and now we’re heading to overtime. At least Slovakia is beating Olympic Athletes From Russia 3-2 in that game. But yeah… not good!

Jesus christ. 2-goal lead to start the 3rd period. Come out flat for the final 20 minutes, get pushed around all period. Still had a chance at picking up 3 points but then give up a goal with just about 90 seconds left in regulation. And then in overtime…

Personally I’ll put at least 75% of the blame on me for calling the game early after seeing the Barstool Flag in the crowd. I need to be better and I will be better as this tournament keeps going. But now Team USA already finds themselves in a deep hole. They only come away from this game against Slovenia with 1 point. Now they have to play against Slovakia and Olympic Athletes from Russia. Points aren’t going to be easy to come across here for the Americans and they just pissed 2 of them away. Yikes.

Thanks for following along. I’ll see everybody on Friday morning for Slovakia.