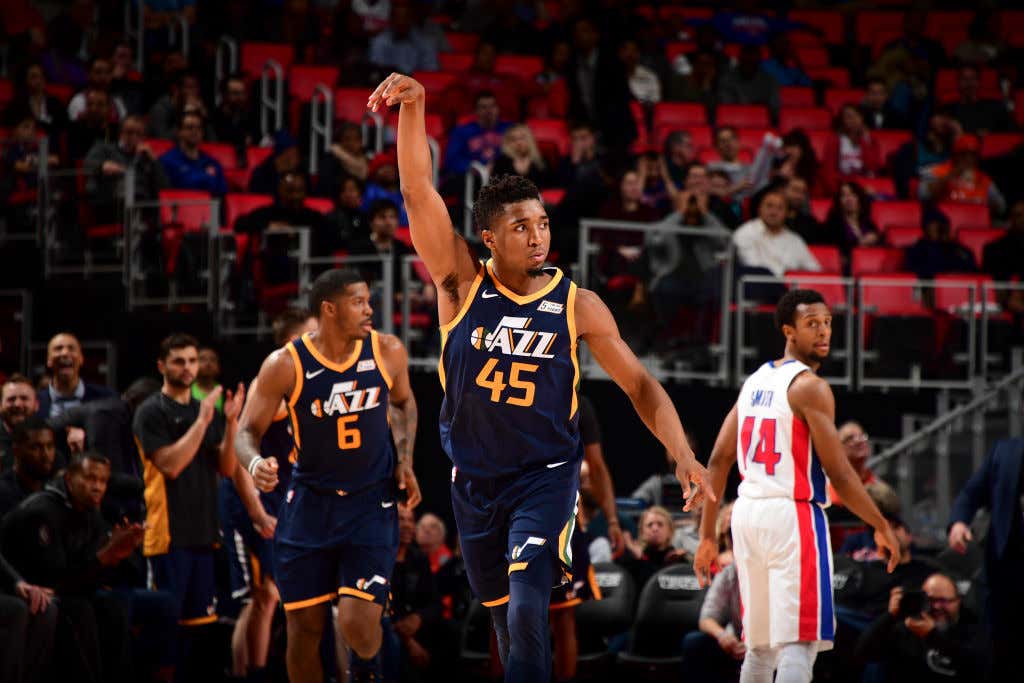 Despite the fact that we all know who is probably going to win the title in June, I’ve always enjoyed the basketball season because over the course of 82 games you get some pretty interesting storylines. Currently, nothing interests me more than the rebirth of Utah Jazz basketball. On January 22nd, this Jazz team was 19-28 with the lottery a whole hell of a lot more realistic than the playoffs. On this night they lost 104-90 to the Atlanta Hawks. It was the third game Gobert had played since coming back from the knee injury he suffered against the Celtics and they started 1-2. Then everything changed.

When talking about the Jazz you have to understand that this was a team that at the start of the year was predicted to win 44 games. Not great, but not terrible either. Then the injuries happened. Gobert has only played 31 games this season missing huge chunks of time to start the season. As you can imagine, he’s a pretty important piece to what the Jazz do. He essentially ended up missing all of November- mid January, and the results spoke for themselves

You also have to remember that during this time Donovan Mitchell had just become a regular starter. He officially became a fixture in the starting lineup on November 11th. The Jazz were 6-7, which means that up until Gobert came back, they were 13-21. That’s a tricky record though, because despite the losing the Jazz did have a stretch from 11/18 to 12/4 that made you think this team was starting to figure it out. During that stretch they won 7 of 8 including 6 in a row. Donovan Mitchell started to have ridiculous games, like these

Now that Mitchell had the attention, when you looked closer at how they played and why they won, it looked familiar to what you could expect with a healthy Gobert. They got back to defending. Holding teams like DEN to 77 points, the Clippers a decent 107, a healthy NO to 108, then there was the Wizards scoring just 69 (nice but not nice). It made you think that hmm, if Mitchell continues to flourish and now that Gobert was back, maybe they had something

They would then go on to win just 5 of their next 19 games. Gobert got hurt again just 5 games into his return. It looked like this team was headed for the lottery.

The calendar then turned to 1/17, and Gobert was back in the lineup. His debut of 24/13 with 3 blocks looked great

Since that game, Mitchell has continued to soar. Now with a healthy Gobert by his side, everything has opened up for him. Take a look for yourself at his numbers since Gobert’s return

You also have Rubio playing some of his best basketball of the season, averaging 20.64.4/7.8 with 53/57% splits in February. Look at the impact it’s had on all of those stats we talked about above

They are a completely different team. Add in the additions they made at the trade deadline and you wouldn’t recognize this team two plus months ago. The closer you look at what the Jazz are doing, the more you uncover why they may be having this success

and here’s maybe the biggest thing

These two are clearly the cornerstones of this franchise moving forward. This level of defense is important, and this is where Gobert obviously makes his biggest impact. The Jazz’s Drtg jumps from 98.8 to 104.7 the second he steps off the floor, and now that he’s back it’s crazy how much they’ve improved. The Jazz during this run are 7th in the league at opponent FG% in the restricted area and 61.3%. That’s quite the difference from the 64.3% they had been at while he was out, which is 17th in the league. Basically they went from below average to in the top 10.

Offensively, during this streak the Jazz have Joe Ingles making 3.4 3PM a night on 55.8% shooting. That is RIDICULOUS but makes a lot of sense when guys have to worry about Mitchell on the perimeter as well, and then Gobert in the post. Hell, Jae Crowder has come in and looked like the Celtics Jae, making 3.0 3PM on 50% shooting in his first two games.

Utah has been shooting the ball great form midrange as well, with a 47.4% FG% in that area which is 3rd in the league over the course of their winning streak. They can thank the strong play of Hood (gone)/Rubio/Mitchell for that. No team has shot better from the left corner (50%) thanks in part to Jonas Jerebko, and they rank 3rd (shouts Ingles) in above the break threes (41.9%).

The big question is mostly if what we’re seeing over the last few weeks is sustainable over the course of the rest of the season. It’s hard to say, because offensively the Jazz are shooting at pretty unsustainable rates given the types of shots they are taking. Defensively they are obviously for real with a healthy squad. Now, after winning 10 straight the Jazz find themselves not dead, but in a playoff race. Can they made up the 1.5 game difference to find themselves in the final playoff spot? Here’s the good news. The Jazz have done all this while playing the 2nd toughest schedule in the NBA (PHI has the 1st). That means their second half theoretically should be easier in terms of opponents, so I’m buying all the Jazz stock right now. If they stay healthy and continue to defend at this level, even if their offense levels out a little bit all the teams in the West are so stacked together, we could see this team get to as high as 5/6 and I’m not kidding.

You’re never really as good as you are during a streak like this, just ask the Celtics or the Cavs, and you’re never as bad as you are at your absolute worst. The Jazz are somewhere in the middle, but given how their season started, who wouldn’t take that?