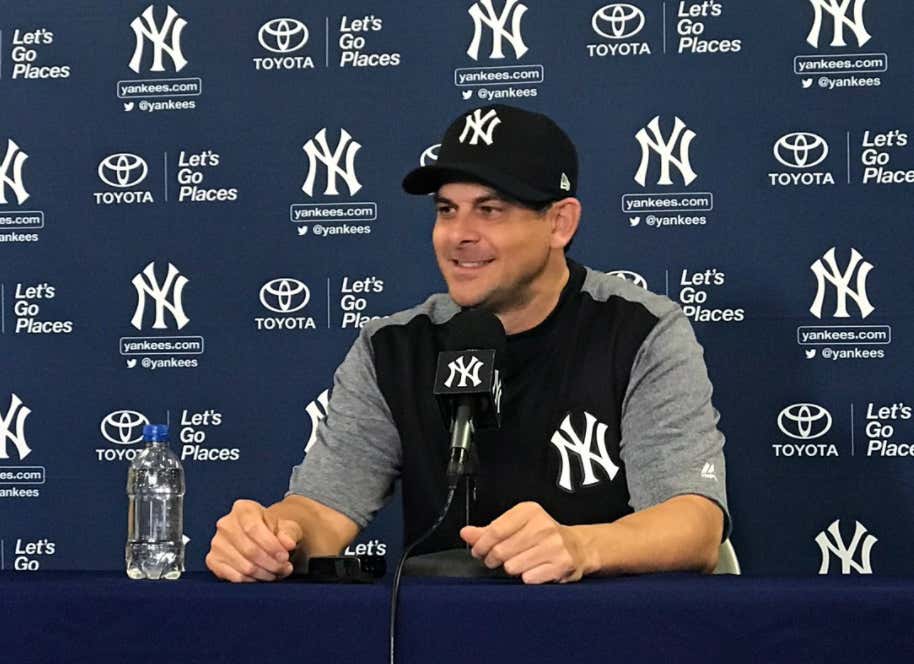 Today Aaron Boone had his introductory Spring Training press conference with the Yankees. Lots of questions about the expectations with the team and how he’s going to handle being a first time manager. It got me thinking, has there ever been more pressure on a first-time manager than what is being put on the shoulders of Aaron Boone in 2018? I don’t think it’s close to be honest. Not only does Boone come in with zero managing experience to his name. He takes over a team that is immensely talented that just came one game short of the World Series. That team also acquired the most valuable player in the National League over the offseason. That team also has a top 5 prospect about to be called up and take over a starting position. That team also plays in New York.

World Series or bust has never been more on the table for an incoming manager. The Yankees enter the 2018 season as the World Series favorite, over the Astros (which I think should be switched personally). They’re picked to win the division comfortably by several games over the Boston Red Sox. All of this is being thrust upon them with a manager who was commentating baseball alongside Jessica fucking Mendoza last year.

If this team, for whatever reason, struggles out of the gate the NY media will be calling for Boone’s head without hesitation. This isn’t like the NBA where Steve Kerr can sit back and let Draymond Green and Iguodala coach the team for fun and still win by 40+ points. The most talented teams don’t always win in baseball. In fact it rarely happens. So much has to break your way to win the Fall Classic and that’s the fine line of being a successful manager and not, especially in New York. Did you pull your starter before he started leaving pitches up in the zone? Did you call a hit and run late in the game to get the offense going? Are you using your closer for the final 3 outs or the most important outs? A manager’s brain is a scary place during those 9 innings. Aaron Boone is about to have the most pressure packed season a first year manager can possibly have.