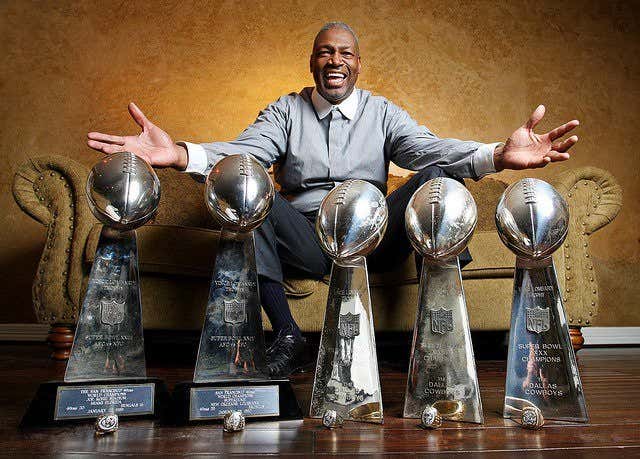 Dallas – Former Cowboys defensive lineman/linebacker and Pro Football Hall of Famer Charles Haley recently discussed America’s Team with the Dennis and Cowlishaw show on 103.3 ESPN Dallas. Here are some highlights from the interview.

“I don’t think they understand what it takes to win a game. If you want to look back, if that was Coach [Jimmy] Johnson, we would’ve worked harder than we did last year just to repeat that part of it. I don’t see that maturity where guys are doing their own thing out there. When the coach says run 10, you run 15, or you grab your teammates and go run. They took 13-3 for granted and they thought, ‘OK, we’ll win the Super Bowl the next year.’

“I blame everybody. It’s one team and everybody’s together. And that’s the key. I go over there and I tell guys, ‘Man, Jerry built this house for a bunch of damn losers.’ And they get mad. They have to do something about it. I can’t do anything about it, I can’t play. All I can do is give you some knowledge.

“And then the egos are so big and they’re so busy getting on Twitter and Facebook and everything else – maybe they should get in that playbook. Maybe they should learn how to rush, catch and block.”

I’m at this point in my life where I feel like it’s important to start planning for my future. Nobody outruns Father Time and I can’t expect to keep churning out hilarious blogs, bestselling books and spectacular podcasts forever. So I have to start planning for things like what kind of an old retired writer I plan to be. And right now, I want to be like Charles Haley.

Forget those old bucks at my gym who sit around playing cribbage at 8 in the morning. To hell with those guys who stop anywhere they see some guys doing repair work on something and take up their time asking about the project. And while I’m tempted to become one of those old Micks who sits around getting drunk during the day at the Elks, that’s not going to it for me. I want to be an irascible old know-it-all like Charles Haley bragging about how hard he had it back when men were men.

Yup, those Cowboys teams of the ’90s weren’t into self-promotion or big egos. When they were hanging out at that den of iniquity they called the White House, doing giant rails of coke off the chest of $1000 a night escorts with Michael Irvin, they were putting team first. T-E-A-M team. When they were banging TCU coeds two and three at a time, they still kept their noses in the playbook. They weren’t SnapBooking and InstaFacing. They were all about hard work and dedication and being the best they could be every single day.

And that’s the kind of thing I’m going to be telling the guys who come to Barstool after I’m gone. About the old days when Dave was delivering papers in an Astrovan and I was goofing off at my old day job using my phone as a mobile hotspot to post blogs for no money. And now that Haley and I have both been part of five Super Bowls, we’ve earned the right to tell everyone how tough it was back in our day. And what a bunch of damn losers everybody who comes after us are. Thanks, Charles. It’s still a long way off for me, but it’s going to be a blast.