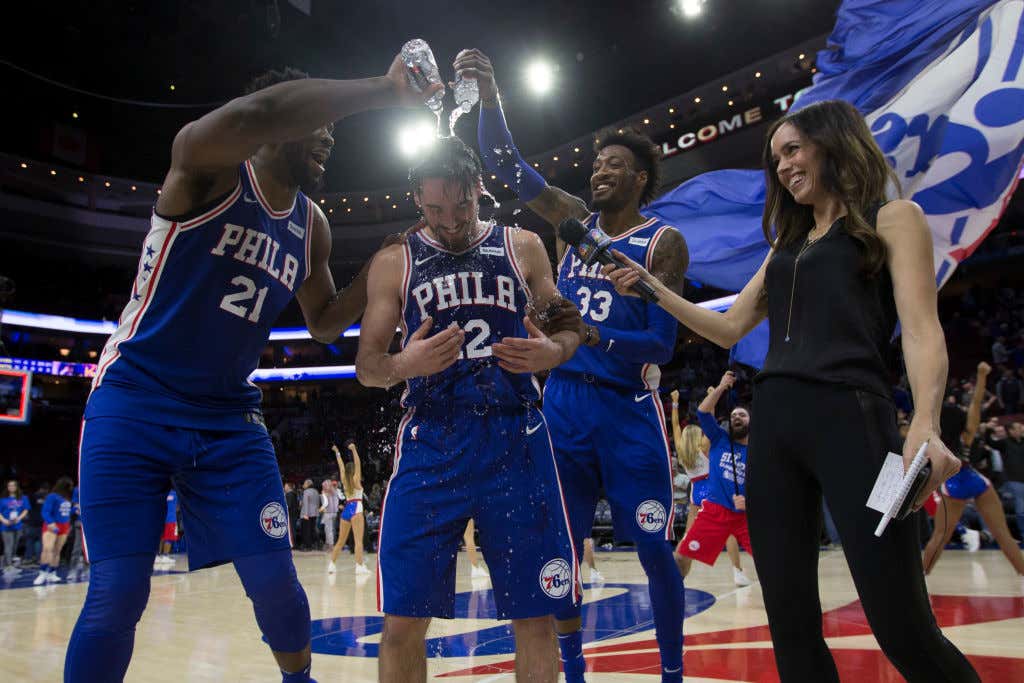 Hello and welcome everybody to another edition of Last Night In The NBA where we catch you up on everything that happened from the night before in the Association. There were just 5 games on the schedule so you may think it was mostly uneventful, but no, it was another wild night of basketball. With the All Star break just days away we saw some teams that are playing some of the best basketball of their season last night and probably don’t want the break. If for whatever reason you missed the action, here’s what happened.

Remember the Pistons honeymoon phase? Boy wasn’t that fun. They’ve now lost 3 in a row and are dropping further and further from the last playoff spot. Good thing they traded away their whole team and took on all that Blake money! On the other hand, we have the Pelicans, who are scratching and clawing to stay alive in their own playoff fight despite not having Boogie. You know what helps with that? Anthony Davis.

Just a casual 38/10 on 14-24 shooting. He even went 3-6 from deep. Pretttaaaaayyyyy good. What made this game interesting is that Emeka Okafor, yes you read that right, Emeka Okafor made his first start in years. Did you even know he was still playing basketball? Well he is, and get this, he wasn’t half bad! He played just 13 minutes, but had 8 points 7 rebounds and 1 block. I’ll always be fond of Okafor dating back to when I was 16 and in PHX to watch UConn play in the Sweet 16 and he signed my Huskies poster that everyone got. Still have it to this day. Safe to say the value today is not what I thought it might have been when I was 16 but that’s not the point.

Anyway back to the game. Because Okafor was the starting center, this moved Mirotic to his familiar role coming off the bench. The result was pretty familiar as well (21/12)

and let’s not forget max player Jrue Holiday either, who also had 21/12 on 50% shooting. This win brings NO tied with DEN and still within earshot of the 5 seed. While I don’t think they get that high, they aren’t out of the woods yet. There is still another team gunning for their spot that we’ll get to in a minute.

For DET, it’s tough to drop a game at home and shoot 36/28% in the process. Blake led the way with 22/6 but also had 5 TOs, and no other starter had more than 14 points. In terms of the second unit, this was every bit of a disaster as the starting group, combining to go 13-36. That’s pretty bad.

There are few teams in the East playing as well right now as the Sixers. In fact, since the SB everything is coming up Philly when you really think about it. Times are weird. But look, even a Sixers hater like myself can tip my cap in respect to this type of basketball. They’re locking in on defense, turning teams over and letting their basketball freaks to do their thing.

But christ do I hate TJ McConnell. I think it started considering he went to UofA and I’m a Sun Devil, but the man had the game of his life last night and I can give him credit where it’s due.

He’s the one guy who is always going 100% even in a pickup game at the Y, and the exact player you love if you have and hate if he’s not on your team. He’s basically a white Marcus Smart only with a 10 billion times better jumper and not quite the defense. At the end of the day, he impacts games and he’s been playing so well for the Sixers this year that they don’t even miss Fultz. Bastard. The Sixers are now 4 games over .500,and have moved into the 7th spot in the East in a tie with MIA. No chance they want the AS Break right now given how they’re playing.

For NYK, listen I get the season is lost, but for the love of god will you learn how to foul? This game was close until they decided to foul Robert Covington and by foul I mean barely slap his arm as he was going up for a fast break layup. Pretty sure he had a personal like 8-0 all off terrible turnovers and stupid fouls. Bad job, bad effort.

At least Beasley went off

The reason NO can’t rest? Teams like the Clippers are nipping at their heels. Obviously beating BKN isn’t hard, pretty sure the Chippewas and Tex could beat BKN right now. It’s even easier when you have 7 players in double figures and shoot 56.5% from the field. Pick a name, any name, and they played well

They now move on to BOS to has their own issues, so they’re playoff hopes heading into the break are still very much alive. Which again, is confusing as to why they blew it all up but whatever.

For BKN, you should be ashamed of yourselves. What happened to all that promise you showed earlier in the year? Now you’ve lost what, 6 in a row and have just 1 win in your last 11 tries. What assholes. I don’t even know what to show for you in this game, so I guess here’s maybe the only positive thing for your future

Also, I thought Okafor was going to solve things? When does that happen?

In a battle of tanking franchises, I can’t lie, I love what the Bulls are doing. I know they won this game which may have been stupid, but it was an exciting ending that I would trade in for the percentage points for sure. In my opinion, they are executing the perfect tank.

Sure they blew an 18 point lead in the fourth quarter, but that shit happens. After dropping 7 straight (good tanking), they’ve now won 2 of the last 3 and the most recent coming in a fashion that would make me excited if I’m a Bulls fan (also good tanking). You don’t want to be complete dogshit like ORL or ATL, you want to lose but still show excitement and promise. That’s what the Bulls are doing right now.

For ORL, only one thing matters. Mario Hezonja can ball!

I don’t know where this stretch of basketball has been over his young career so far, but we’ve never seen anything like this. Still an awful pick going top 5, but not nearly as shitty of a player as many thought. Congrats.

I am ALL IN on the Jazz. Not just because they’ve won 10 in a row, but because now that they’re finally healthy we’re seeing how legit they are. Oh and Donovan Mitchell is a bonafide STUD. 13 big points in the fourth quarter to help pull out the win, teams like DEN are 10000000% murdering whatever scout convinced them to take someone over Mitchell.

We haven’t even at the AS break and you can just tell he’s a special talent. But the key to the run the Jazz are on is because it’s not just Mitchell, he’s getting help everywhere he looks

So here’s my promise. If you’re a Jazz fan, maybe you’re living in UTA and figured out how to work around the weird Mormon internet laws and found yourself on this fine website, the Jazz deserve a bigger blog to figure out how the hell this run is happening. Stay tuned for that.

For SA, it’s weird they’re 13-17 on the road right? Doesn’t feel very Spurs-y. They certainly had their chance, down 2 with the ball with 16.7 seconds left, but it just wasn’t meant to be. Once Danny Green hit that three with a minute and change to put SA up one, you probably thought that was it. The Spurs just did what they Spurs do.

Their starters played well, all five reaching double figures, but the bench, woof. SA has now lost 2 in a row and has just a 0.5 game lead over MIN for the 3rd spot. This is a team that definitely needs the break to regroup.

I think it’s safe to say this game doesn’t need any sort of breakdown. Just watch the dominance

For PHX, look I get it, losing by 50000 is tough to watch. But allow me to spin this for you because that’s what I do best. You have your point guard of the future in Elfrid Payton! Don’t judge him by his previous basketball, judge him solely by what you saw last night against GS, which was 29/8/5 on 11-18 shooting

The future looks bright, I promise. Maybe not your future, but the future in general.

And that’s it! You’re now all caught up on everything that happened last night in the NBA. We’re right back at it again tonight with 6 games, including some good ones like MIA/TOR, HOU/MIN, CLE/OKC, and SA/DEN. As always, don’t worry about having to watch them all, just check back here tomorrow and I’ll fill you in.