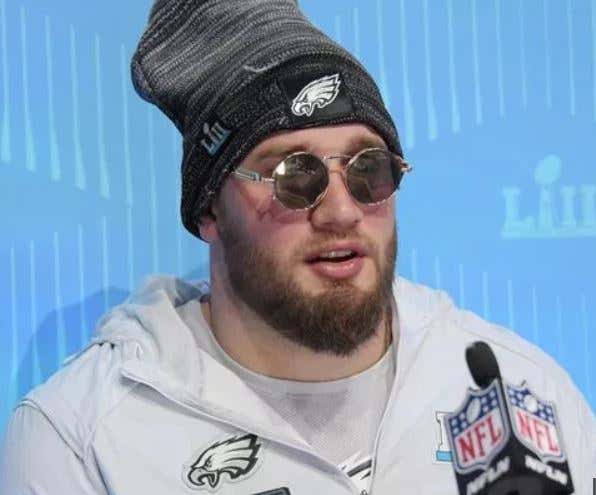 “I just think that the ‘Patriot Way’ is a fear-based organization,” said Johnson. “Obviously, do they win? Hell yes, they win. They’ve won for a long time. Do I think people enjoy [it] and can say, ‘I had a lot of fun playing there?’ No, I don’t. That’s just the God’s honest truth.
“They’re successful, but when they go to interviews, they act like [expletive] robots. Hey, stop being a [expletive]. We can be cordial for a little bit. You only get to do this job one time, so let’s have fun while we’re doing it,” he continued. “Not to be reckless, but I’d much rather have fun and win a Super Bowl than be miserable and win five Super Bowls. But hey, it is what it is.”

Tedy Bruschi has some advice for the first-time Super Bowl champ: Enjoy yourself, but leave the Patriots out of it. “Lane Johnson, I don’t know what he’s talking about. I had a lot of fun,” Bruschi said Monday. “There were so many times that we would speak out in meetings. The entire team meeting would erupt in laughter. We were playing music on the team plane. We had so much fun in the ones that I was there. I cannot understand what he’s saying there.” “If you want a relationship and a double-date with your coach, go play with those guys,” Bruschi said. “If you want to learn how to win games and consistently win games throughout your career, you play for Bill Belichick.”

Bruschi finds it ridiculous that Johnson is still talking about the Patriots when he should be celebrating a Super Bowl victory.
“Here’s the problem: The game is over. It’s been a week and he’s still talking about the team he beat. Why are you bringing up the Patriots when all you should be talking about is the celebration of your championship, the celebration of everything you did. Congratulations to the Philadelphia Eagles; you are world champions,” said Bruschi. “But now we’re talking about the Patriots? “This is the first time you’ve won one, and this is a sign when people just don’t know how to regularly win football games. You talk about the other team and talk about who you beat, bringing up other things,” continued Bruschi. “Let me teach you how to celebrate a world championship. Because when you win back-to-back championships, from a guy who failed trying to do it and that succeeded trying to do it, you need more than planned celebrations, dog masks and trick plays. He will learn that when they try to repeat. He’s bringing up the New England Patriots in a time you shouldn’t be.”

I fucking love Tedy Bruschi. I think I’d kill for him.  I really do. He basically said everything I wanted to say about Lane Johnson. Guy is a loud mouth idiot. I have no idea why he is still talking about the Patriots, but anybody who says they’d rather win 1 superbowl than 5 is a loser and somebody I don’t want on my team period. Hey Lane you know what is fun? Winning. This isn’t elementary school. This isn’t pop warner where everybody plays and gets a trophy. It’s a business and the only thing that matters is winning. Yeah the Eagles beat us, but the Patriots have won more than any team in the history of football. Our way works. Our players love Belichick. Ask Tedy Bruschi. Ask Randy Moss. Ask Willie McGinnist. Ask Rodney Harrison. Ask Julien Edelman. Ask Danny Amendola. These are Hall of Famers. Not nobody’s who need to bash other teams just so people know his name. Just enjoy your victory and shut your fat face.