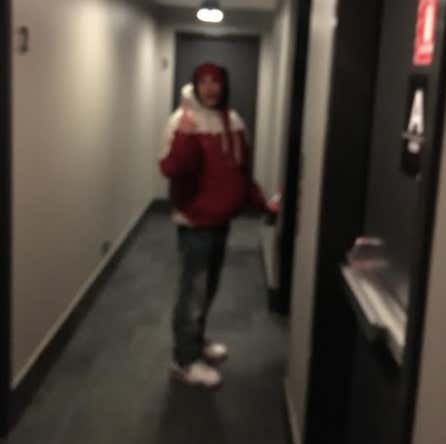 I’ve now told this story on instagram, twitter, and radio. But GOD HELP ME if you think I’m not going to write it, because that’s what I do–I beat a horse to death and then pen a memoir on the episode.

2 weeks ago, I moved from Brooklyn Heights to Chelsea, Manhattan. I had lived in Brooklyn for 5 years and was sad to say goodbye, but the early demands of the morning radio show had me dreading my commute from Brooklyn each day. Thus, I packed up my belongings and moved to the gay capital of New York City. The streets in Chelsea are filled with buff, short men with perfectly-curled mustaches and v-neck that exhibit hairless pectorals. These men hold hands as they walk regardless of whether they’re dating–though to say they walk is misleading; it’s more of a strut/float hybrid. Needless to say, the first thing I did was follow a pair of such fellows into their gym, whereupon I hastily cancelled my old membership and jumped on with the new. This place was incredible. Mirrors so grand and numerous that I felt like I was in some wonderful gay carnival fun house. Everyone was sweating and I couldn’t wait to show these guys how a straight man lifts.

My new apartment in Chelsea is a duplex. The main entrance is on the top floor, and the door to that entrance locks automatically. Downstairs, my bedroom sits a few feet from another entry door to a hallway. This door, however, does not lock automatically, and I have been forgetting to keep this door locked. It is simply a coincidence that I “forget” to close my backdoor entrance in my new apartment in the gayest place in New York. Who knows what sort of surprises might slip in through that naughty entryway.

Last night, I decided to turn in at the responsible hour of 9:30PM. I understand this is a childish hour to go to sleep, but I’d spent the entire weekend making out with hot chicks, none of whose names I can remember, so I was tuckered out. Sunday is also my cheat day, and there’s an amazing cupcake shop on my corner. I’ll go there on Sunday nights and order cupcakes simply to impress the cute girl behind the counter. She wears a hat to keep the hair out of her face and as she’s loading my cupcakes into the box, she asks, “is all this just for you?” I play along and respond, “I don’t know, are you coming over?” And then we laugh but she never comes over, so it’s a pretty shitty joke that ends with me eating 4 cupcakes alone, using my stomach as a plate to catch the crumbs, which I then inhale using a rolled-up $20.

At 2AM, I woke with a start. I was sweating so much that I thought I’d had a wet dream, which reminded me of how much simpler life was when I could achieve an orgasm while unconscious. By contrast, nowadays I need a woman, mom and dad’s unlimited data plan, or a massage parlor in Chinatown to get my rocks into my socks. The point is, I was sweating so hard that I knew something was off. And that’s when I heard the sound of my door opening and closing.

Usually, when you wake up in the night and hear a strange sound, you can convince yourself that your mind is playing tricks on you. But you don’t always know for sure, and that unknown causes fear to seep into your spine and turn you into a statue under your covers. In terms of survival, it’s about the dumbest thing we do as humans. The working hypothesis is that some malevolent intruder will discover our stricken, paralyzed, pencil-straight body and think, “gross, I’m not going to rape that! I prefer bodies that fold.”

This, however, is not how I reacted because I knew it was an intruder. There were no tricks of the mind, no fear seeping in, no hiding under the covers because I was certain, beyond any doubt, that a stranger had entered my apartment at 2AM. That clarity spurred me to action. Did I look around for a weapon? Please, my hands are hammers. Did I call the police? No, snitches don’t get bitches. I tiptoed to my bedroom door, leaned in real close, and whispered… “hello?”

In hindsight, this is a great move for checking to see if a woman is still awake in a romantic comedy; it is not the right way to maintain the “element of surprise” when attempting to foil the plans of an evildoer. You could almost argue that a whispered “hello?” is more of an invitation than a threat. As in, “hello? I have a few more bites of the red velvet if you’re hungry.” I’m not proud of my choice, but the response came quickly and nervously: “oh, sorry! I’m a little lost.”

Huh. Lost, you say? Good neighbor, let me point you back on course so that you may resume your harmless adventure of discovering the interiors of Chelsea apartments. At 2AM. On Sunday night. Hmm… not buying it. I opened the door just in time to see my perp dash out into the hallway. I knew he was heading to the 1st floor to exit the building, so I grabbed my phone and ran upstairs. I opened my front door just as he was stepping out of the elevator, which is when I took this picture: 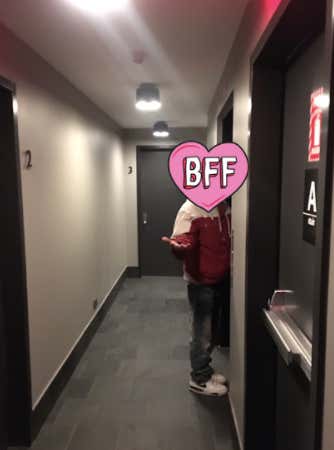 I covered his face with the BFF emoji because I’m hoping that I can visit him in prison where we’ll play chess and talk about music we like for 5 years such that once he gets out, we’ll be BFFs. I’ve always wanted a BFF who did time; nobody fucks with that BFF.

I had opened the door a crack to stick out my arm to take the pictures, but now I opened it fully. I no longer cared if this guy was going to stab me. Mostly because I noticed he had a coke bottle in his hand and it just seemed unlikely that someone enjoying a delicious coke could get so angry as to stab someone. When I drink a coke, I think “mmm fizzy” as opposed to “I should start with his achilles.” Summoning my best big-angry-man voice, I asked him what the fuck he was doing in my apartment. He mumbled something about being lost and trying to get out of the building. I had taken about 10 photos of him by now, but so many of them came out blurry that I knew I could never post them on Instagram. He told me to stop taking pictures of him, probably because he was ashamed of his body given that he’s been drinking so much coca cola lately. Honestly, people who walk around casually with bottles of soda are so gross. I can understand drinking it at a movie with some popcorn where it’s dark so nobody can see how stupid your dietary choices are. But in plain sight, under the lights, walking around with a coke like it’s a canteen of water? No, I don’t feel bad for calling the police.

Which is what I did next. I gave the 911 dispatcher a lengthy description of the events. She asked me to identify his race which immediately made me uncomfortable. It’s like Jesus lady, have you read the news lately? I’m not going to end up on Deadspin with a 911 recording of me yelling HE WAS NOT WHITE BUT I DON’T KNOW THE DIFFERENCE BETWEN LATINO AND HISPANIC AND I KNOW I’LL SAY THE OFFENSIVE ONE!

The police arrived 5 minutes later. It was incredible how quickly they were there. I can’t get sushi delivered in under half an hour and here I had an army of NYPD’s 5 minutes after I started my 911 call. They came in the door and asked me if everything was ok. I’ll say this: the lead guy was asking me questions in a way that was pretty laid back. I remember he laughed a few times, never at my jokes, but just at other stuff. His casual manner actually helped put me at ease, which was a gift at that point because I was pretty anxious. They asked if I would be able to identify the guy if I saw him, and I said yes, I had a picture. They told me to come look at a guy they had in their car. When we walked outside, I said yep, that’s him, and then we walked back in. They were able to nab him (I love the word “nab” in this sentence) based on my description on the 911 call. I’ll bet these guys crush Pictionary at parties.

And that was that. Ladies and gentleman, I had been served and protected. I felt fine as I said goodnight to the cops. I was calm now, assured that the bad guy was in custody. I still don’t know why he was in my apartment, but it’s a situation I wouldn’t wish upon anyone. It’s one thing to have your home invaded by an axe murderer, but it’s a nightmare of another magnitude when you take 10 photos of your invader and only ONE of them is fit for social media!